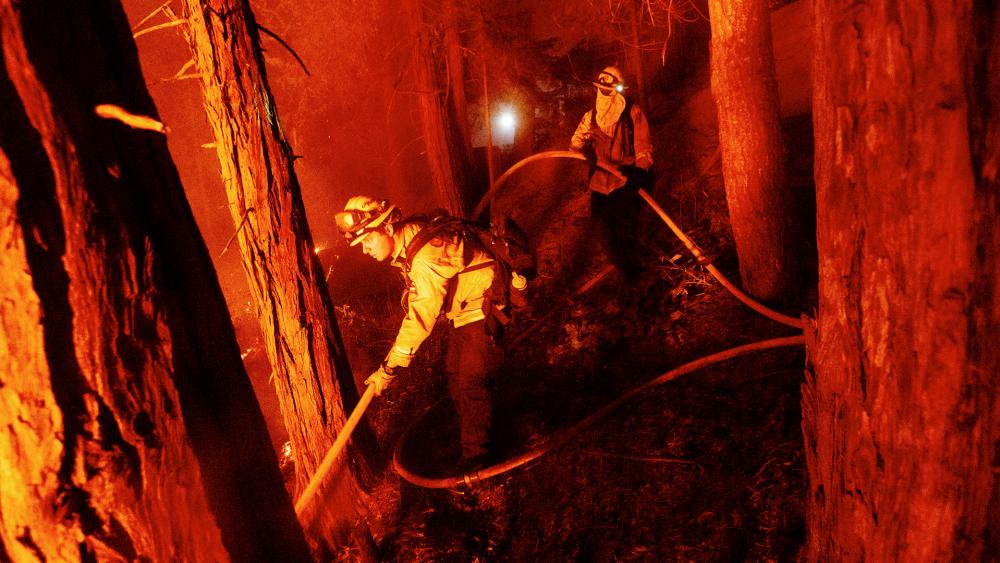 SUGAR PINE, California – At least 33 people are dead and half-a-million ordered to evacuate as 100 wildfires sweep across 12 western states.

The landscape is truly apocalyptic. Millions of acres of forest are burning along the West Coast, the smoke blotting out the sun. In Oregon, dozens have died, and officials fear that number could go much higher.

Here in Yosemite National Park, the normally breathtaking scenery is hidden by a choking layer of smoke and falling ash.

The Creek Fire in the Sierra National Forest is keeping 1,600 firefighters busy day and night, but considering its size, locals say that's not nearly enough.

Rancher Larry Kellerhals said, "The whole area for miles around burned, burned Monday I believe, so I'm worried about my stock, they haven't gotten anything to eat for four or five days."

"I'm hoping to get back as soon as the officials will let me in," he said.

The smoke coming from this 175,000-acre fire is almost overwhelming up here just about an hour to the east of Fresno, California. And it's blanketing all of southern California all the way to Las Vegas, Nevada. But that's not necessarily a bad thing according to some of the officials who say this blanket of smoke is part of what is helping to contain this fire.

CALFIRE Public Information Officer Michael Davis said, "While this smoke is a real burden and it's not any fun to have your community socked in with smoke and be breathing this, it's actually doing a lot of good because it's moderating fire behavior substantially, and that's giving us a chance to try and get out in front of this thing."

The Trump administration has dedicated more than 26,000 personnel to assist, with dozens of grants paying for fire suppression and to help rebuild.

"My administration is closely coordinating with state and local leaders and we want to thank the more than 200,000 people that are working on it and 28,000 firefighters and first responders who courageously and bravely are fighting out there," the president said.

But in many places, residents aren't waiting for government help – they're helping each other to try and save their communities.

Sugar Pine resident Jason Torlano told us, "The other day I put out a call to have some friends come help me on our property, brush, in case the fire, this Creek Fire comes this way, because the fire departments are short and man I have 12 guys showed up and four other guys on the other side cutting a line, and it's just amazing."

"These guys are making the roads wider and just making it so if the fire department comes in they have an easier time to stop the fire coming down," he said.

Touring the fire zone last week, California Gov. Gavin Newsom blamed the carnage on climate change, but some firefighters say it has more to do with bad policy.

Firefighter Robert Marino said, "The forests are just unhealthy, they've been progressively getting worse... we used to do logging which helped thin out the forest, but under political pressure from the environmentalists they stopped the logging. But the consequence of that is the forests are overstocked now."

Marino said, "I've been a firefighter for about 34 years now, and I've seen a lot of wildfires, but I haven't seen any wildfires like this that have been so widespread up and down throughout the state."

Despite the massive response from state and federal governments, the fires continue to rage, and residents here are continuing to pray for the best and prepare for the worst.

"The fire that may not come this way, but we are doing the hazard reduction that we need to do to fortify the community and make it safe, and we're doing a good job, but like I said I haven't seen any fires like this in a long time," Marino said.