'Towers of Light' Honors Victims of 9/11, NYC 'Tribute in Light' Back on After COVID-Cancellation 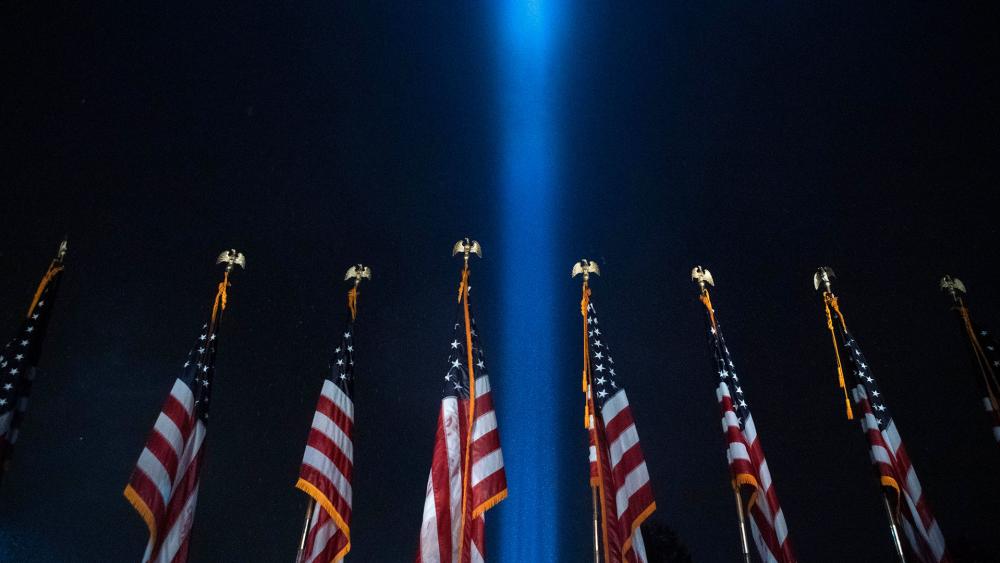 A beam of light is seen over the Pentagon, as part of the Towers of Light Tribute marking the 19th anniversary of the 9/11 attack on the Pentagon, Wednesday, Sept. 9, 2020, in Washington. (AP Photo/Jose Luis Magana)

Friday marks 19 years since the terror attacks on New York City and Washington, DC that brought the world to a standstill.

Ahead of the Sept. 11th anniversary, a special light tribute was displayed in the nation's capital to honor the 2,977 lives lost that day.

The Towers of Light could be seen in the sky near the Pentagon where Flight 77 slammed into the building that fateful morning, piloted by al Qaeda terrorists. On Friday, the Pentagon also unfurled a remembrance flag:

A similar light display will also be seen at the Flight 93 Memorial near Shanksville, Pennsylvania.

At Ground Zero in New York City, six moments of silence will be observed denoting the times each hijacked plane stuck and each tower fell. It will also mark the time Flight 93 crashed after the crew and passengers fought back against their hijackers as well as the attack on the Pentagon beginning at 8:46 am Eastern time.

Due to the COVID-19 pandemic, officials in charge of the event said that social distancing will be observed.  Instead of in-person reading of the victim's names, an audio recording of the list of names will be used.

In 2001, our Nation, united under God, made an unbreakable promise never to forget the nearly 3,000 innocent Americans who were senselessly killed on September 11th. On this sacred day — Patriot Day — we solemnly honor that commitment. https://t.co/LzAFPe72YX

St. Paul's Chapel which is located near Ground Zero, is hosting the Prayers for Peace and the ringing of the Bell of Hope in remembrance of Sept. 11.

Also, New York City will display the annual Tribute in Light. That display had been canceled due to pandemic fears, but then was reinstated after an outcry.

The NYC display is made up of  44 7,000-watt xenon light bulbs arranged into two 48-foot squares in the shape of the Twin Towers. Every year, the lights are turned on at sunset on 9/11 and burn bright until the sunrise of Sept. 12.

And on Saturday, the 9/11 Museum at Ground Zero will reopen after being closed for six months due to COVID.

On Sat., Sept. 12, we open our Museum doors to the public after being closed for six months. Timed tickets to the Museum are available online at https://t.co/IBbST0lL35 #911Museum pic.twitter.com/bWG1Sw49XE