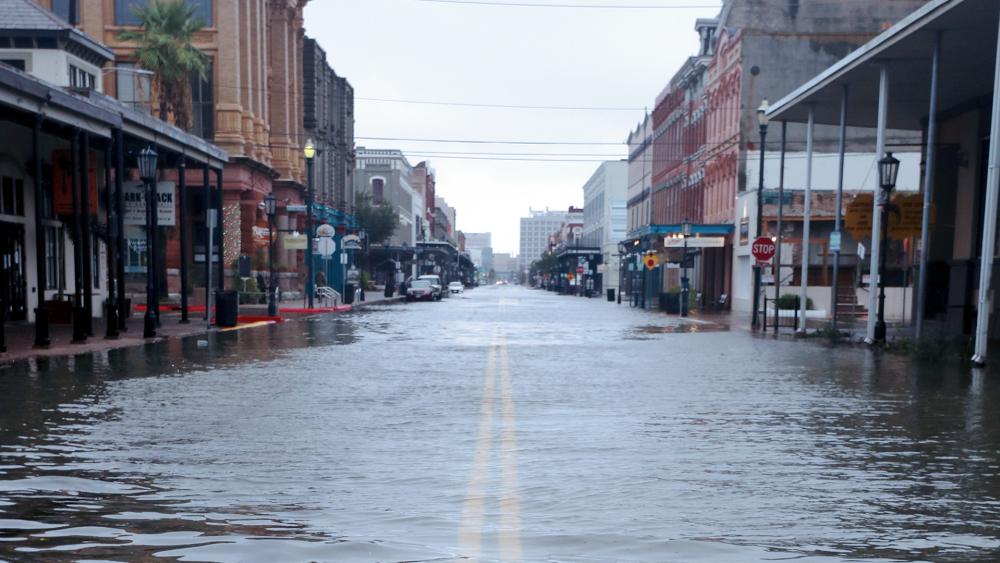 The slow-moving storm is expected to linger over the coast for 2-3 days, dropping up to 15 inches of rain in some areas and creating the potential for flash flooding through Wednesday.

Part of a well-known fishing pier in Galveston broke off due to the rough waves pounding against it.

Here is a video of the end of the 61st Pier breaking off and floating away shortly after 10pm tonight.

A storm surge of up to four feet was projected from Port Aransas to Sabine Pass in Texas.

"For the middle and upper Texas coast, additional rainfall of 6 to 12 inches with isolated storm totals up to 20 inches is expected," the hurricane center said.

4 AM CDT Tuesday, September 22 Key Messages for Tropical Storm #Beta. Significant flash and urban flooding is occurring and will continue near the middle and upper Texas coast today. https://t.co/pWVN7x5qij pic.twitter.com/dvaxL9A59u

And flooding is already impacting the roadways in Houston where numerous motorists became stranded Tuesday morning.

#BREAKING: 288 at Holly Hall is flooded in BOTH directions!! Drivers going the wrong way on the freeway. PLEASE AVOID THE AREA! @KPRC2 #kprc2 pic.twitter.com/DxTlUfmC86

Nearly 11 million people are under flash flood watches all along the Texas-Louisiana coast.

The rainfall and storm surge concerns prompted Louisiana Gov. John Bel Edwards to declare a state of emergency on Monday.

Today, I declared a state of emergency in advance of Tropical Storm Beta, which could impact Louisiana in the coming days. The declaration allows the state to assist local governments with their response needs. https://t.co/4KxLlGjtc9 #lagov #lawx #Beta

Streets turned into rivers in the Florida panhandle, where hundreds of people had to be rescued from their homes.

And right after that hurricane moved out, CBN's Operation Blessing arrived in Pensacola, Florida to help with recovery efforts.

As a line of cars came through the church parking lot, volunteers handed out the much-needed assistance to bless residents in their time of need.

Lead Pastor Josh Lipscomb said, "We've seen smiles on people's faces that probably haven't smiled in days and it probably meets a need bigger than we can imagine. So from the bottom of our heart, we're grateful to Operation Blessing and the individuals that make this possible to serve the people that we love in our community."

Beta is the ninth-named storm to hit the US mainland during the 2020 hurricane season. The last time that many storms made landfall was in 1916.