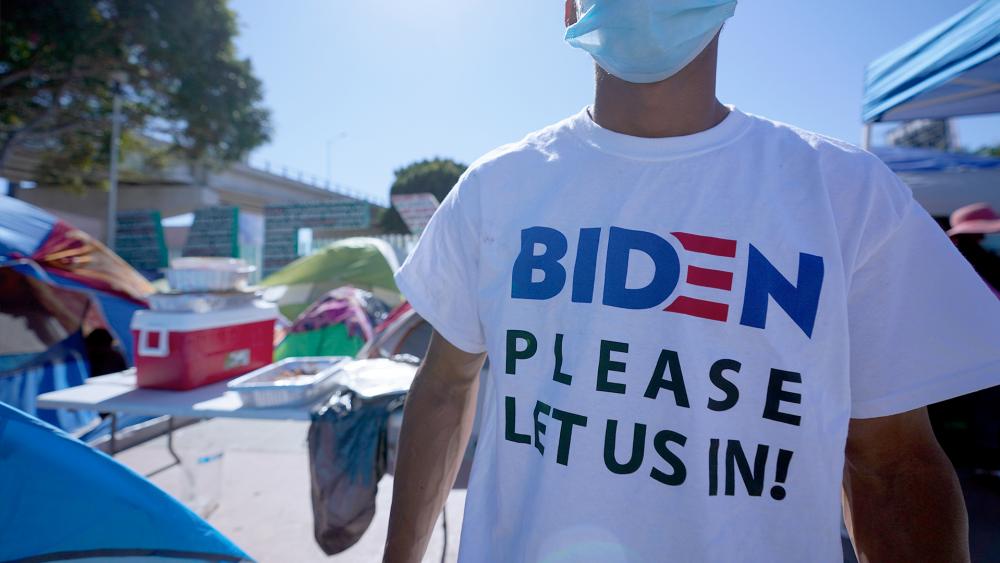 A Honduran man seeking asylum in the U.S. wears a shirt that reads, "Biden please let us in," as he stands near an entrance to the border crossing, March 1, 2021, in Tijuana, Mexico. (AP Photo/Gregory Bull)
6248585833001
Border Surge Smashes Records - The White House Solution? Pay off Central American Governments

There is a new report the Biden Administration is so desperate to stop the border crisis that it is looking at a plan to pay Central American governments in a bid to stem the surge.

The situation is so bad that the Department of Health and Human Services has reportedly asked workers at other federal agencies to volunteer to take paid leave to go to the border to help care for the thousands of illegal immigrant children being held there.

The border surge is breaking records. Over 172,000 migrants were stopped at the border last month – the most in 20 years.  And almost 21,000 unaccompanied minors are now in federal custody – the most ever.

"If you go back to the Democrat debates, every single one of the Democrat candidates said if they are elected they will have open borders and they will be giving things for free to anyone coming across the border," Abbott told Fox News Sunday. "This problem will continue to get worse because of the policies that have been adopted by the Biden administration."

Abbott points out that even some Democrats are pushing back against the Biden White House, and he says what would stop the surge would be a return to the border policies of the Trump Administration.

Instead, Reuters reports the Biden Administration is now considering cash payouts to some Central American nations to try to improve economic conditions there to help stem the surge at the border.

Republican House Minority Leader Kevin McCarthy blasted the idea of a cash program of economic assistance to some Central American nations to try to stem the surge, tweeting, "President Biden wants to try and buy our way out of his border crisis with taxpayer money. The Administration is spending $60 million a week, and now wants to launch a cash transfer program in Central America. This insults millions of Americans who are out of work in our country."

And while Joe Biden put Kamala Harris in charge of fixing the border crisis nearly three weeks ago, she still hasn't held a press conference or even visited the border to see what's happening there first-hand.