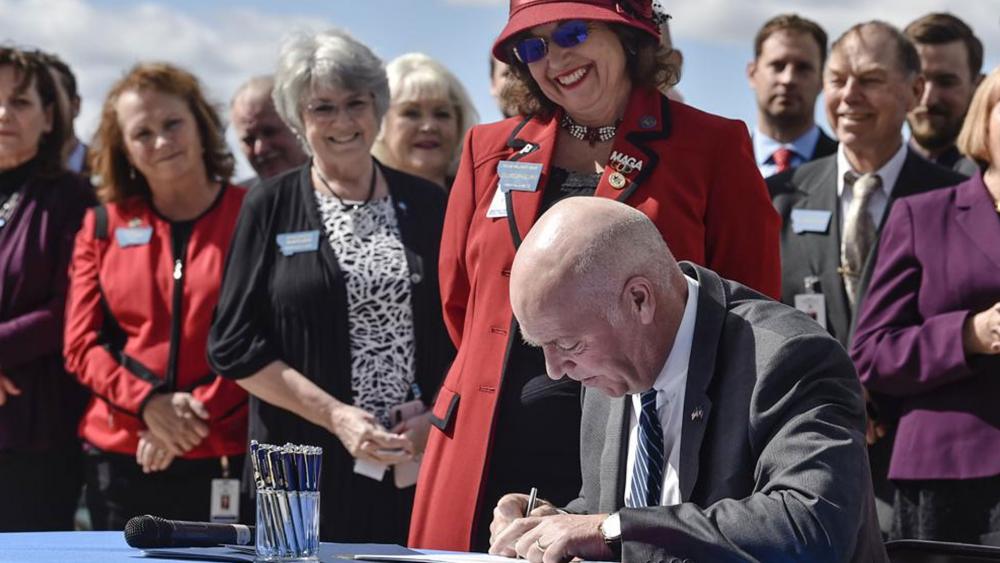 Montana Gov. Greg Gianforte signed three bills on Monday restricting abortion access in the state, celebrating it as a success after several attempts to pass similar measures in previous years were vetoed by former Democratic governors.

The bills ban abortion after 20 weeks of gestation, require health care providers to give pregnant women the opportunity to view an ultrasound before performing an abortion and place several restrictions on abortion drugs, like requiring that they be administered in-person rather than through telemedicine.

Gianforte signed the measures in the presence of a jubilant crowd of Republican lawmakers and anti-abortion activists.

"It's a promising day, a day that will go down in our state's history as we defend life," Gianforte said.

He also tweeted about the new legislation, writing: "Life is precious and ought to be protected. Today, I proudly signed into law bills to protect the life of our most vulnerable, the unborn."

The new laws mark a shift in the state's approach to abortion regulation after 16 years of Democratic governors who vetoed past attempts by the Republican-controlled Legislature to limit access to the procedure.

"We have waited 48 years to see our governor in Montana sign this bill," said Rep. Lola Sheldon-Galloway, the Republican who sponsored the measure to ban abortions after 20 weeks of gestation. She said the Supreme Court's landmark Roe v. Wade decision — establishing a nationwide right to abortion in 1973 — was misguided.

Meanwhile, in Oklahoma, Gov. Kevin Stitt also signed three pro-life bills into law, including ones to criminalize the procedure in certain cases and cost providers their medical licenses for performing them.

The Republican-controlled state Senate passed measures requiring physicians who perform abortions to be certified in obstetrics and gynecology, adding abortion to the list of unprofessional conduct by doctors, and prohibiting abortions if a fetal heartbeat can be detected.

In the case of the fetal heartbeat bill, any doctor who performs an abortion after detecting a heartbeat would be guilty of homicide.

A baby's distinct heartbeat can be detected using vaginal ultrasounds as early as 6 weeks before many women know they are pregnant. Less-invasive abdominal ultrasounds can detect a heartbeat a few weeks later.

Several other pro-life bills are still awaiting the governor's signature, including a "trigger bill" that would immediately outlaw abortion in Oklahoma if the U.S. Supreme Court overturned the landmark 1973 Roe v. Wade case that legalized abortion. At least 10 states have similar laws, according to the Guttmacher Institute, a research group that supports abortion rights.

Stitt, a Republican in his first term, reiterated Monday his campaign promise to sign any anti-abortion measure that the Legislature sends to him.

Oklahoma is one of several states where GOP gains are lending more momentum to pro-life progress.