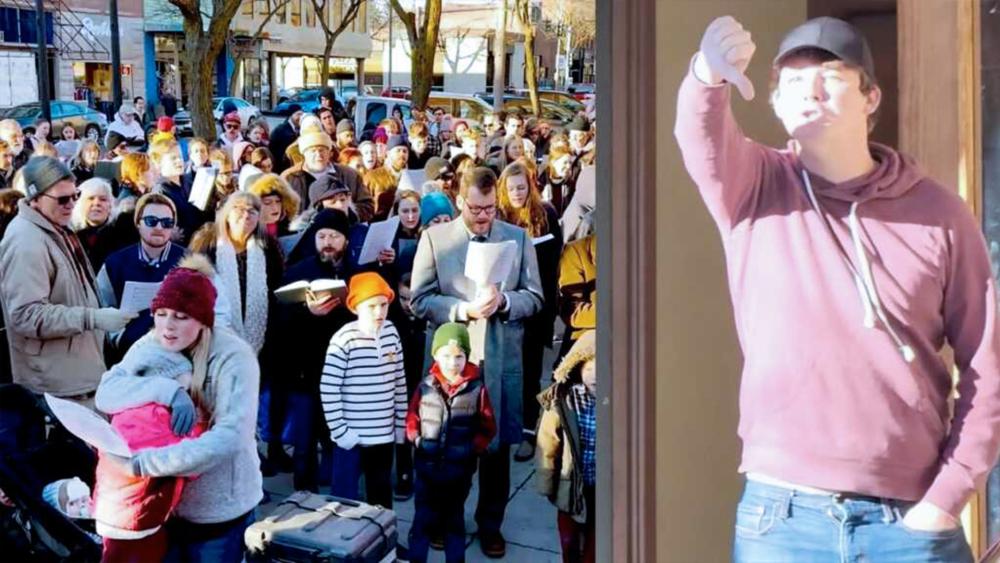 Christmas carolers intent on belting out some melodious, holiday cheer on Sunday were met with a ghastly disruption, the purported placement of a noise machine intended to obliterate their seasonal ballads.

Video of the incident shows around 300 people associated with Christ Church, a house of worship in Moscow, Idaho, assembling in Friendship Square.

As they sang traditional Christmas music, a bloodcurdling noise began emitting from an open window of the Moscow Hotel.

The cacophony ironically unfolded during a beautiful rendition of “Joy to the World,” as congregants sang, “Repeat, repeat the sounding joy.”

Unfortunately, the unpalatable noise did, indeed, play on repeat.

And that’s not all. According to Moscow Report, a man yelled from the hotel steps and “made disparaging gestures” to the individuals and families innocently assembled to simply deliver some festive carols.

Watch it all unfold:

Despite the spectacle, the Christian participants handled the disturbances in a pretty incredible and uplifting way.

They continued to sing and even offered up a boisterous “Merry Christmas” as a response to the malevolent madness.

“The first thing we should do is, on three, say, ‘Merry Christmas,'” Christ Church Pastor Doug Wilson said from the stage, to which the crowd complied and enthusiastically shouted the holiday greeting.

When hecklers attend your downtown Christmas Caroling, I recommend responding like @Christ_Kirk…

Wilson encouraged the carolers to move across the street, where they continued singing without incident.

Props to the carolers for keeping their cool and remaining positive despite the obnoxious interruption. The example is one to be followed when similar events unfold.