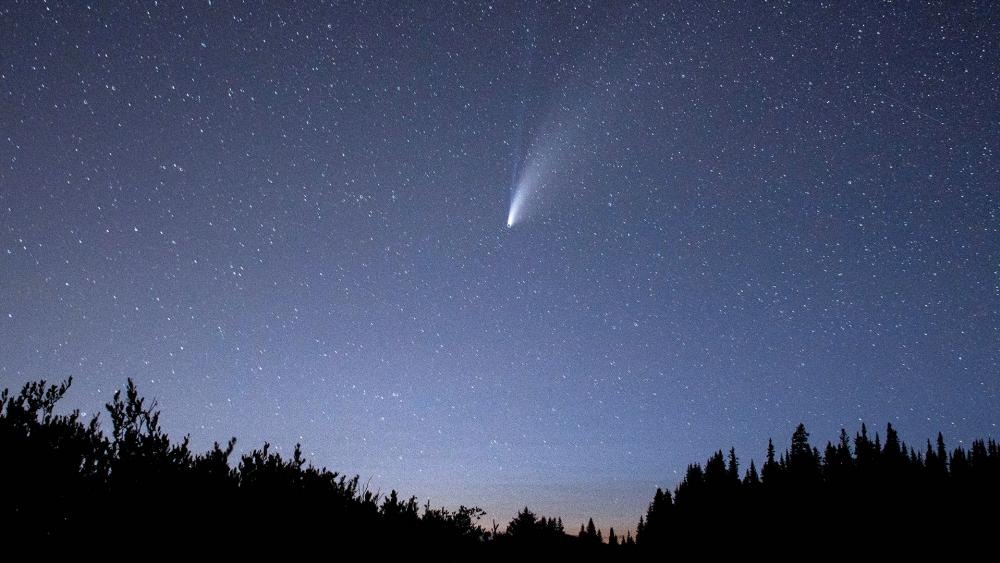 Photo of the Comet NEOWISE taken in late July 2020 on Shrine Pass Road near Red Cliff, Co. This comet will not be seen with the human eye again for another 6,800 years. (Image credit: Nima Sarrans/Unsplash)

A celestial spectacle has been visible in the pre-Christmas night skies, and it's something that astronomers say will never pass this way again.

Comet C/2021 A1, better known as Comet Leonard, will make a close approach to Venus after passing by the Earth on December 12.

According to Arizona University's A News, the comet can be seen low in the southwestern sky just around sunset.

But the comet came so close to Venus on Thursday night that its discoverer likened it to a "cosmic close call."

"There is a small chance Venus will pass close enough to the comet's path where it may pick up some dust grains in its atmosphere, producing a meteor shower on our neighboring planet," Gregory Leonard, a senior research specialist at the University of Arizona Lunar and Planetary Laboratory, and the discoverer for whom the comet is named.

While scanning the night sky last January, Leonard discovered the comet while looking for near-Earth asteroids.

The tail of the comet was a dead giveaway, he said. Another incredible feature is how fast it's moving. According to Star Walk, the comet is traveling at the speed of 43 miles per second. Due to its speed, the comet's position will change every day when observers view it from the Earth.

Leonard told A News he encourages anyone who's interested to try to view the comet in order to see an effect called forward scattering. He explained that as the comet comes closer to the sun, the comet's tail and "coma" – a cloud of dust and gas – may scatter the sunlight from behind, potentially dramatically enhancing the comet's brightness.

"I feel there is going to be something to be seen even for the casual observer," Leonard said. "Find yourself a dark sky with a good view of the horizon, bring binoculars and I think you may be rewarded."

According to astronomers, this isn't the first time Comet Leonard has been through our solar system. They speculate that 80,000 years ago, the comet encountered the sun for the first time, before hurtling back into the depths of space. It took 40,000 years for the comet to make a return appearance.

Leonard reminded amateur astronomers that if they do get to see it, to take a good look, because Comet Leonard won't be back.

During the second half of this month, the comet will move into the southern celestial hemisphere. On Christmas Day (Dec. 25), Comet Leonard will be visible from the Southern Hemisphere in the constellation Microscopium, according to Star Walk.

The Apostle Jude may have been describing comets when he wrote in his brief epistle in the Bible's New Testament about "wandering stars," according to the Institution of Creation Research (ICR).

"Raging waves of the sea, foaming out their own shame; wandering stars, to whom is reserved the blackness of darkness for ever." -- Jude 13.

In the verse, Jude is referring to false teachers, whom he likens to "wandering stars" or what we know today as comets.

As the ICR explains in its online article, "The analogy is evident: just as a false teacher sometimes appears as "an angel of light" (II Corinthians 11:14), so a comet in proximity to the sun has a brilliant tail of gas emanating from its icy head which is illuminated by the sun. The nearness of a comet to the sun is only temporary, for the comet soon departs to a remote region of the solar system where the diminished light of the sun cannot vaporize its icy mass. A comet far from the sun is invisible to even the most powerful telescope and can be described as residing in "outer darkness."

The ICR also notes this is probably the only reference in the Bible that could be applied to comets.

This Christmas comet comes one year after another remarkable celestial phenomenon that was being compared to the Star of Bethlehem.

CLICK HERE to Read About the 2020 Event: Rare 'Christmas Star' Appears Dec. 21 - Here's What Astronomy Says About the Biblical 'Star of Bethlehem'