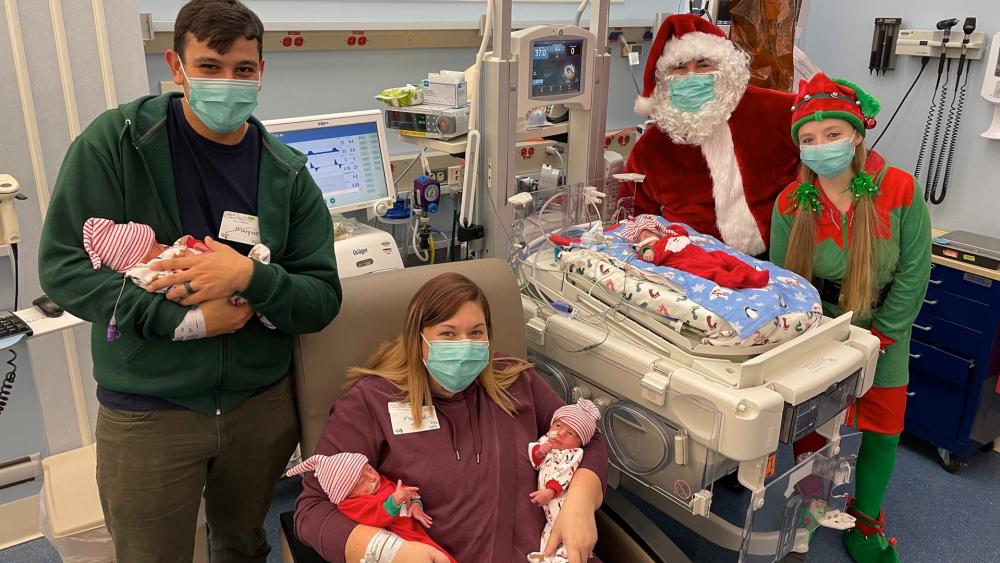 The birth of preemie quadruplets in Georgia is being called a "Christmas miracle."

Mariah and Jose Marquez welcomed four new "nuggets" into their family just ahead of Christmas, referring to the moment as "sheer happiness."

The couple arrived at Memorial Health University Medical Center in Savannah on December 15 to finally meet their three sons and daughter, according to a Facebook post.

Born seven weeks early, Jameson, Andrew, Joseph, and Delilah were delivered via cesarean and then went into the hospital's NICU to receive special care.

Little Delilah underwent major surgery on Dec. 18, however, the proud parents recently shared that all four babies are doing well and making progress.

"Our sweet nuggets are doing SO well. Our boys just need to work on eating and growing as much as they can," Mariah wrote. "Our little Delilah has made so much progress in just one week since surgery. She's going to catch up to her brothers in no time!"

The Marquez's, who also have a 5-year-old-daughter, told WSAV-TV that they had struggled for years to expand their family.

Doctors had previously said their firstborn was a "miracle" and that the possibility of having more children was not likely.

"I found out pretty young that I had some fertility issues," Mariah told the news outlet. "We tried for about four years and just nothing really worked."

But they didn't lose faith. After several years of trying, they became pregnant with the help of fertility treatments.

"We didn't think we would even have one kid, let alone another one after our first, and then four after our first," said the proud mother. "So, we basically went into shock when we found out."

She added, "Just going from thinking, 'that could never happen,' to having your heart so entirely full is just the most incredible feeling."

The couple expressed their gratitude to those who offered prayers and positive thoughts during the delivery, as well as the staff at Memorial Health as they continue to care for their babies.

"I've been absolutely blown away by the kindness we've been shown lately by everyone, from family to people we just met to complete strangers," Mariah wrote. "I never expected such an outpour of love for our (not so) little family.

"I can't tell you how much it means to me to have so much support from so many people and to have so many people sending positive thoughts, vibes, and prayers our way. I believe it really has helped so much, especially with the help of the most amazing nurses we could ask for in the NICU."