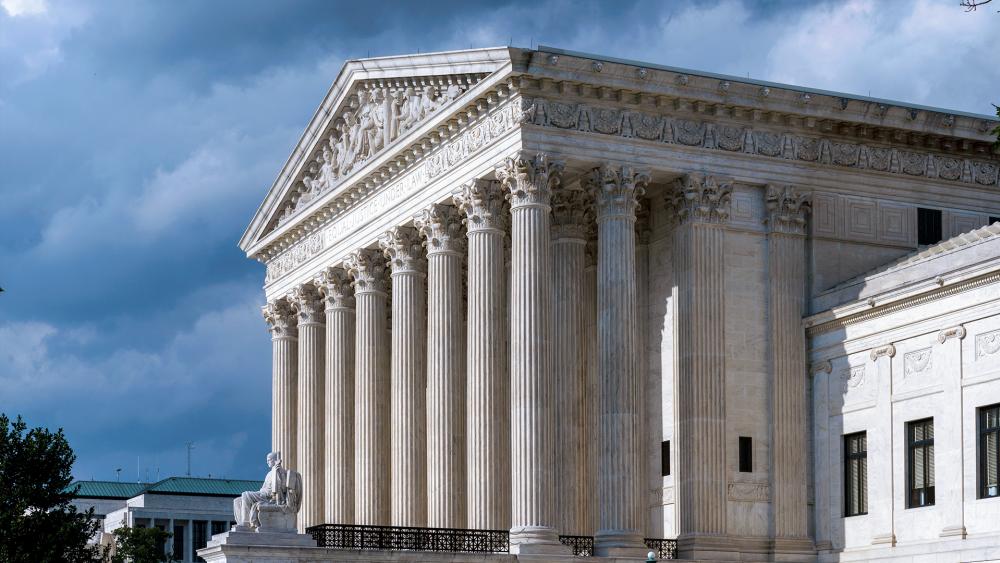 The U.S. Supreme Court ruled Friday that Texas abortion providers can sue in lower courts to block the state's ban on most abortions, but the justices allowed the law to remain in effect as the case moves forward.

At the same time, the high court denied the Biden administration's attempt in United States v. Texas to block the law known as the Texas Heartbeat Act. The court dismissed the Department of Justice's challenge to the law as "improvidently granted."

The court acted more than a month after hearing arguments over the law in Whole Women's Health v. Jackson. The Texas heartbeat law makes abortion illegal after the unborn person's cardiac activity is detected. That's at around six or seven weeks of pregnancy, and there are no exceptions for rape or incest.

The law has been in place in the Lone Star State since Sept. 1. It authorizes lawsuits against abortion clinics, doctors and anyone who "aids or abets" an abortion performed after cardiac activity is detected.

Justice Neil Gorsuch announced the court's judgment writing, "The Court concludes that the petitioners may pursue a pre-enforcement challenge against certain of the named defendants but not others."

The SCOTUS Blog tweeted about Gorsuch's opinion, explaining "the ultimate merits question" of whether the Texas law is constitutional "is not before the Court. The ruling simply allows the clinics' lawsuit to go forward in the lower courts. The law remains in place for now.'

The opinion by Justice Gorsuch stresses "the ultimate merits question" of whether the Texas law is constitutional "is not before the Court." The ruling simply allows the clinics' lawsuit to go forward in the lower courts. The law remains in place for now.

The high court ruling came a day after a state court judge in Texas ruled that the law's enforcement, which rewards lawsuits against violators by awarding judgments of $10,000, is unconstitutional but left the law in place.

The Supreme Court was divided 5-4, with conservatives in the majority, on the issue of whom to target with a court order that ostensibly tries to block the law. The court ruled that Texas licensing officials may be sued, but dismissed claims against state court judges, court clerks and Attorney General Ken Paxton.

Chief Justice John Roberts and the three liberal justices dissented from that part of the decision in an opinion that said the purpose of the Texas law was "to nullify this court's rulings" on abortion.

In a statement, Texas Right to Life Director of Media and Communication Kimberlyn Schwartz said, "We are grateful that the Supreme Court practiced judicial restraint today and stopped the Biden administration's pro-abortion campaign against the strongest Pro-Life law being enforced today."

"While we continue to fight for this policy in the lower courts, Texas Right to Life celebrates that the Texas Heartbeat Act will continue saving between 75-100 preborn children from abortion per day. The success of our efforts is embodied by each individual life that is rescued," the statement concluded.

Court watchers expect the Texas case will return to the justices at some point.  Meanwhile, the high court's conservative majority also seems likely to allow reasonable abortion restrictions in a Mississippi case that was argued last week, although that decision is not expected until the spring. Some believe that case could overturn Roe v. Wade - the 48-year-old decision that legalized abortion in the U.S.

California Plans on Becoming a 'Abortion Sanctuary' if Roe Overturned

The state of California plans to act as an "abortion sanctuary" if the Supreme Court overturns Roe v. Wade.

California abortion clinics and their allies in the state legislature revealed their plan Wednesday, which may include using "public funding" for travel, lodging and abortion procedures for people from other states.

Some of the state's most powerful lawmakers helped write the plan's recommendations that the Golden State will consider if the high court does overturn Roe next spring.

"We'll be a sanctuary," Democrat Gov. Gavin Newsom said last week, adding he's aware patients will likely travel to California from other states to seek abortions. "We are looking at ways to support that inevitability and looking at ways to expand our protections."

Apparently, money won't be a problem for the state-funded abortion services for patients from other states. Lawmakers plan on using taxpayer money collected during the pandemic which has filled the state's coffers with a record budget surplus.  Next year, the state's independent Legislative Analyst's Office predicts California will have a surplus of about $31 billion.

It's unclear how many people would go to California to abort their children if Roe is overturned. But Planned Parenthood, the country's largest abortion provider which operates about half of California's abortion clinics, said it served 7,000 people from other states there last year.

Pro-life groups are also preparing for the potential influx of women seeking the procedure, but they plan to help them keep their child, providing for their needs and showing them they're not alone.

Jonathan Keller, president, and CEO of the California Family Council said California has about 160 pregnancy resource centers whose aim is to encourage women not to get abortions. He said about half of those centers are medical clinics, while the rest are faith-based counseling centers.

"Even if we are not facing any immediate legislative opportunities or legislative victories, it's a reminder that the work of changing hearts and minds and also providing real support and resources to women facing unplanned pregnancies — that work will always continue," Keller said.