'We're Praying for Everyone': Deadly Tornadoes, Severe Storms Rip Through Parts of US 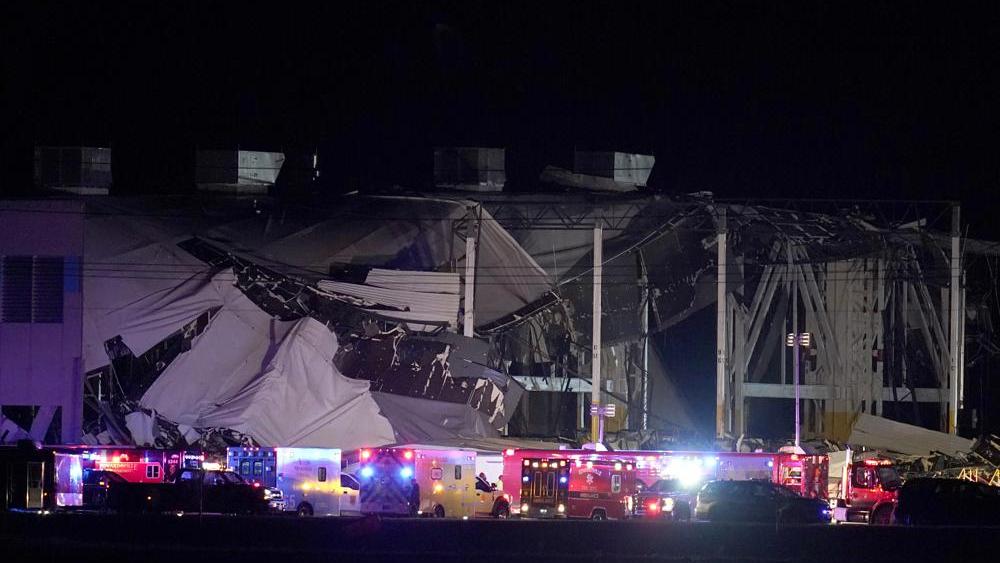 An Amazon distribution center is heavily damaged after a strong thunderstorm moved through the area Friday, Dec. 10, 2021, in Edwardsville, Ill. (AP Photo/Jeff Roberson)

Tornadoes and a powerful storm system swept through parts of the Midwest and South Friday night, leaving several dead and dozens injured, and causing serious damage. And the death toll could go significantly higher.

A candle factory in Kentucky, an Amazon facility in Illinois, and a nursing home in Arkansas, along with numerous homes were hit hard by storms.

Kentucky Gov. Andy Beshear (D) tweeted Saturday morning that a state of emergency had been declared.

"This has been one of the toughest nights in Kentucky's history, with multiple counties impacted and a significant loss of life. I have declared a state of emergency and submitted a request to @POTUS for an immediate federal emergency declaration."

This has been one of the toughest nights in Kentucky’s history, with multiple counties impacted and a significant loss of life. I have declared a state of emergency and submitted a request to @POTUS for an immediate federal emergency declaration. https://t.co/KmMOl95t1N
1/2 pic.twitter.com/Xj5DgTZp1Z

During a news conference, Gov. Beshear referred to the situation as "tragic," adding that he would be praying for the families members of those who perished.

"There were about 110 people in it at the time that the tornado hit it," the governor said. "We believe we'll lose at least dozens of those individuals. It's very hard, really tough, and we're praying for each and every one of those families."

In an update Saturday afternoon, Beshear said at least 70 had died due to the tornado and that the state’s death toll could rise to over 100.

The roof at an Amazon center in Edwardsville, Illinois was ripped off and a wall nearly the length of a football field collapsed. Police confirmed that multiple people were killed at the facility.

"The safety and well-being of our employees and partners is our top priority right now," Amazon spokesperson Richard Rocha said in a written statement Friday night. "We're assessing the situation and will share additional information when it's available."

Driving to the partial warehouse collapse in Edwardsville, looks like almost half the building is damaged @KMOV pic.twitter.com/wDMKJNPqmB

Illinois Gov. J.B. Pritzker offered prayers and support for the people of Edwardsville.

"My prayers are with the people of Edwardsville tonight," Pritzker wrote, "and I've reached out to the mayor to provide any needed state resources."

My prayers are with the people of Edwardsville tonight, and I've reached out to the mayor to provide any needed state resources.

Our @ILStatePolice and @ReadyIllinois are both coordinating closely with local officials and I will continue to monitor the situation.

A tornado struck the Monette Manor nursing home in Arkansas, killing one person and trapping 20 others.

According to Fox 16 News, the nursing home's roof was ripped off and other buildings in town also were damaged. Survivors were taken to a local church to reunite with their family members.

The Weather Channel reported another death at a Dollar General store in Arkansas.

"Officials confirm to our @weatherchannel team that a person has died at a Dollar General in Leachville, Arkansas after storms hit the building," tweeted Meteorologist Tevin Wooten.

Please pray for those affected by the storms as relief efforts are ongoing.