Biden's Prayer Breakfast Message: Where Do We Turn When Times Are Dark? 'Faith Provides Hope and Solace' 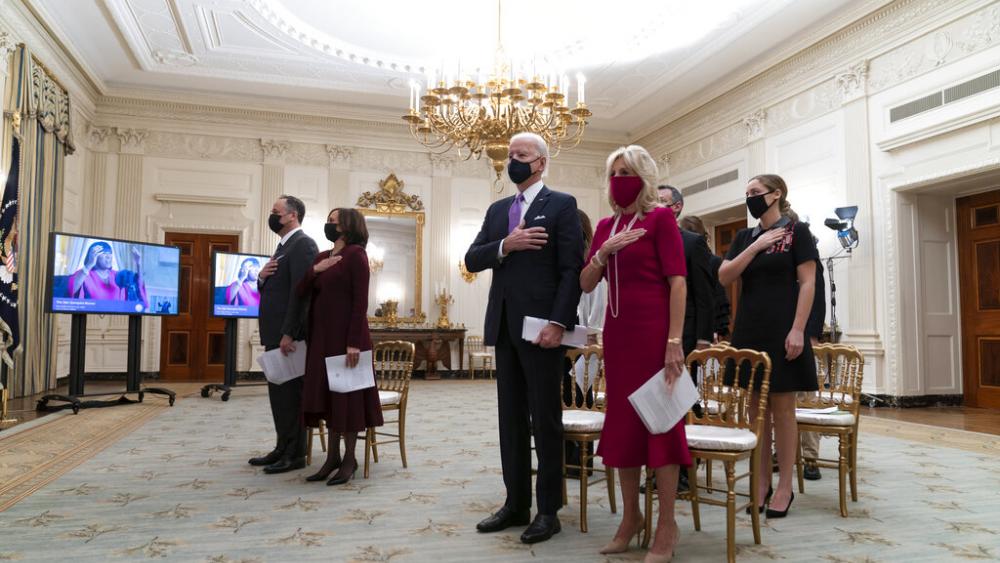 On Thursday, President Joe Biden followed in the footsteps of every living president since Dwight D. Eisenhower by participating in the 69th National Prayer Breakfast. The annual event was presented virtually this year for the first time, because of the COVID-19 pandemic, and it featured messages from every living president except Donald Trump who has hardly been heard from since leaving office.

In his address, President Biden talked about how he's attended the breakfast during many difficult times in our country, but none of those times felt quite as bad as where we are now.

"For so many in our nation, this is a dark, dark time," said Biden. "So where do we turn? Faith."

The President shared a message of uniting around faith to tackle issues such as the pandemic, racial injustice, evictions, and hunger.

"For me, in the darkest moments, faith provides hope and solace, faith provides clarity and purpose as well," Biden continued. "It shows the way forward as one nation and a common purpose to respect one another."

Biden, a Catholic, once again quoted Psalm 30:5, "Weeping may endure for a night, but joy cometh in the morning (KJV)."

"This is not a nation that can or will simply stand by and watch this," he declared. "It's not who we are. It's not who faith calls us to be. In this moment, we cannot be timid or tired. We have too much work to do. And it's by our work, not just our words, that we're going to be judged."

Former President George W. Bush credited prayer for helping our country heal after the terrorist attacks on New York City and Washington, D.C. on Sept. 11, 2001, in his video message.

"Prayer is the language of reconciliation," Bush said. "It has the vocabulary of grace, love, and peace our country needs to move forward together. As president, there was no greater gift than the prayers of the American people. Laura and I often pray for our country and for those who serve it, and we will continue to do so."

Keynote speaker Andrew Young, a Civil Rights activist and the former Ambassador to the U.N., spoke to how the pathway to unity is through forgiveness.

"We have no future without forgiveness for we all fall short of the glory of God," he explained. "If you cannot forgive those who sin against you, how can you accept the forgiveness of your Heavenly Father?"

Democrat and Republican lawmakers in both the House and Senate also shared how they pray together weekly in bipartisan prayer breakfasts, and urged Americans to do the same.