'This is an Exceptional Nation, Blessed by God': Donald Trump Makes First Post-Presidential Speech at CPAC 2021 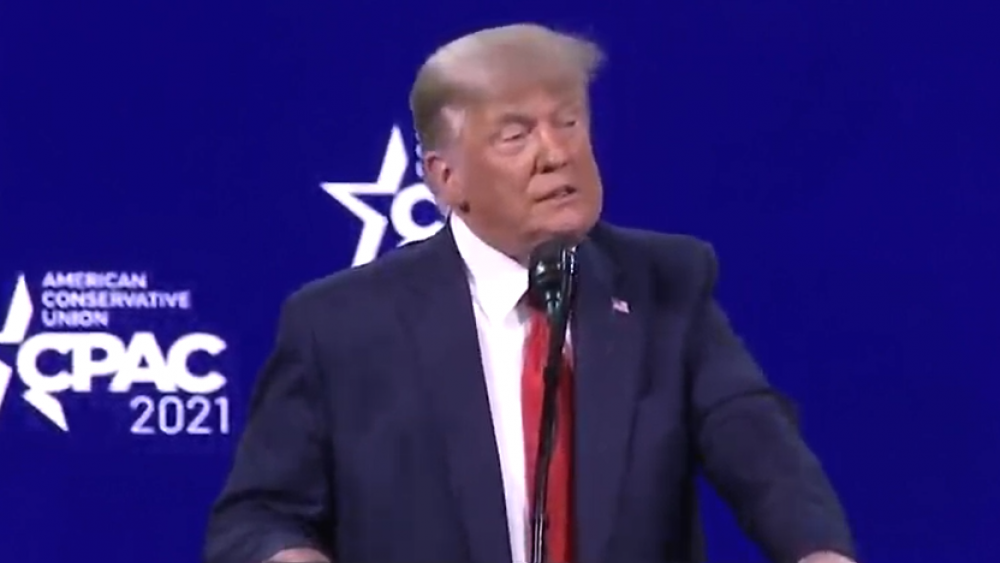 It was his first public appearance since leaving the White House.

Trump took to the stage around 4:45 p.m. and thanked his proponents for their support, assuring them that, "We will be victorious and America will be stronger and greater than ever before."

The former president began his speech by immediately condemning the Biden administration for how it’s handling the security at the Southern Border.

He criticized President Biden's plans on illegal immigration, which some Republicans are calling "amnesty."

"The wall helped us a lot from dangerous predators. Biden is recklessly eliminating our border," Trump said. "Canceling border security has launched a youth crisis with child smuggling."

Trump addressed the impact that COVID-19 has had on children and their education.

"Kids must be back in school immediately. Get the schools open and get them open now," he declared. "Biden's cheating the next generation. It's a scandal of the highest order and it shouldn't happen. The mental health of these young people is at levels we've never seen before."

He discussed the execution of vaccines, which Trump stressed that his administration orchestrated.

"Biden is only implementing the plan we put in place. We did this," he said.

Trump mentioned the cancel culture and strong efforts from the media to spread misguided information.

"I'm going to continue to fight right by your side," Trump emphasized. "We'll do what we've done from the beginning and that's to win."

Additionally, he addressed the Biden administration’s support of biological males participating in women's sports and the harmful impacts that have resulted.

"Young girls and women are being forced to compete against those who are biological males. Women's sports will die if this doesn't change. We must protect the integrity of women's sports."

And Trump praised the foundation of the Republican party, which is to "celebrate our rich heritage."

"This is an exceptional nation, blessed by God. We honor George Washington, Abraham Lincoln, Thomas Jefferson, and all the national heroes. And we respect our great American flag."

Trump supporters have been anxious to hear about his future political plans. He is reportedly considering another presidential run in 2024.

"I may even decide to beat them for a third time," Trump said about the Democratic party. "We will win in the end. We will be united and strong like never before."