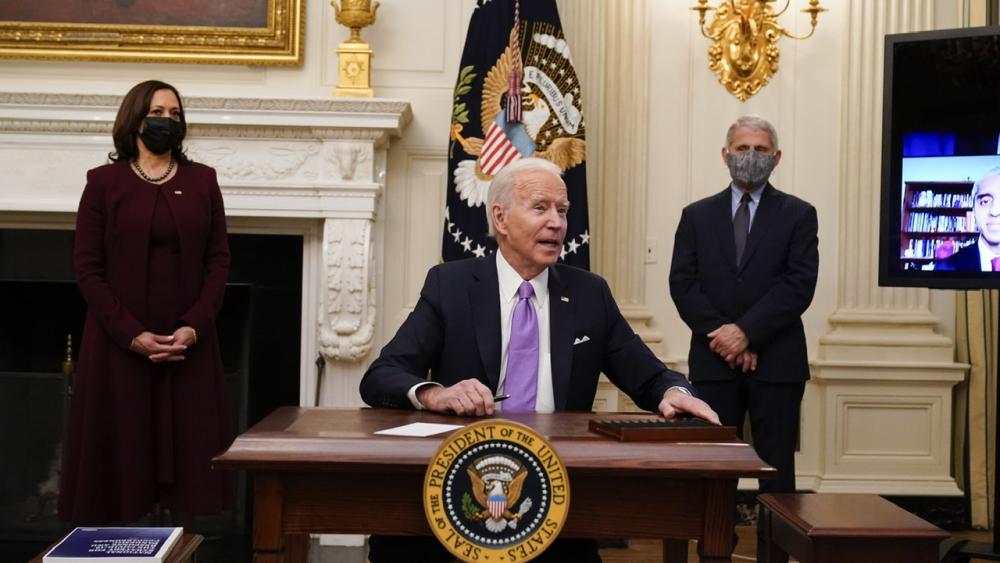 The executive action stated, “every person should be treated with respect and dignity and should be able to live without fear, no matter who they are or whom they love.” It continued: “Children should be able to learn without worrying about whether they will be denied access to the restroom, the locker room, or school sports.”

Several social media users, including journalist and author Abigail Shrier, who wrote “Irreversible Damage: The Transgender Craze Seducing Our Daughters,” pointed out how inherently sexist the policy is.

A new glass ceiling was just placed over girls.https://t.co/cGWZqDpxl8

Pro-women until women have their safety and equality eroded.

Anti-conspiracy until the interchangeability of the sexes becomes mainstreamed.

Pro-unity until one governs according to deep blue sentiment.

Pro-science until biology is dismissed. https://t.co/lQvLlqjqVb

On day one, Biden reduced womanhood to nothing more than a feeling inside a man's head, an insulting set of stereotypes, undeserving of female-only spaces and fair, safe sports categories. American women have absolutely nothing to celebrate today.#BidenErasedWomen

It’s not possible to provide protections for women if a man can declare himself a women and access the same protections. That’s not an opinion. That is a logical fact.

Evolution endowed the sexes differently. Protections for women are just and must be defended.#BidenErasedWomen

I get called TERF because I believe women have a right to our own sports, prisons, refuges & spaces and because I believe children should be protected from people who seek to sexualise them and to confuse them about who they are. Happy to stand for what I do. #BidenErasedWomen

Allowing male-bodied athletes to compete with ♀️ female athletes takes away valuable opportunities for women and girls to participate in and win sporting competitions.

What is so remarkable is the fixation on Harris' stereotypical feminine qualities as the basis for female inspiration.

Female empowerment is strictly understood in terms of gender stereotypes and a firm separation of sex until the issue of gender identity is introduced. pic.twitter.com/YiIpa6jzWw

There were, of course, those on the left who were all too quick to gaslight critics of the policy into believing that the executive order is in no way actually harmful to biological women.

One transgender activist, Charlotte Clymer, tweeted “transphobes are claiming this attacks the rights of cis women,” meaning biological women. Clymer said that’s not the case and instead accused those concerned of invoking “tragic logic” and “sad bigotry.”

To recap: President Biden signed an executed order banning discrimination on the basis of gender identity or sexual orientation. Transphobes are claiming this attacks the rights of cis women. It does not, of course. It's just tragic logic and sad bigotry.#BidenErasedWomen

In addition to the new order being obviously detrimental to women, as Christians, we know God created male and female in his image and likeness. He designed us to be in relation with one another, to have dominion over the earth together, and to “be fruitful and multiply,” according to Genesis 1.

That was the order in which God designed us to live and He called His creation “very good.”

Everyone, of course, doesn’t have to subscribe to that same belief system. However, there is serious concern about the executive action from Biden, because it forces all of us — including Christians and those of other faiths — to adopt a practice that is counter to Scripture.