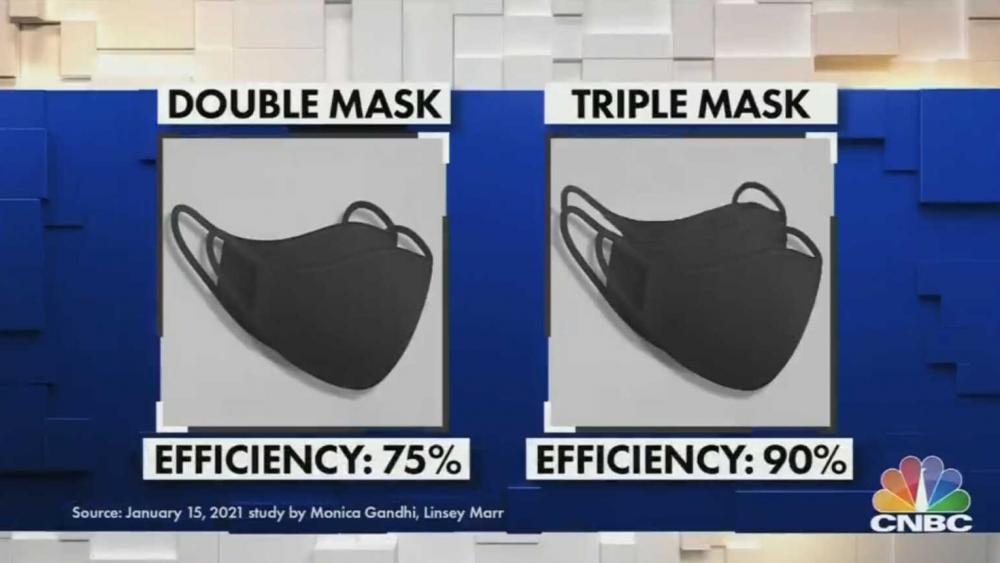 More is always better — I suppose, to an extent, that’s the American way. Now that philosophy is apparently spilling over into how we wear masks.

Speaking this week to NBC’s Savannah Guthrie, Dr. Anthony Fauci, director of the National Institute of Allergy and Infectious Diseases and the unparalleled expert on all things COVID-19, suggested Americans wear two masks instead of one. The scientific reason behind the edification, he told Guthrie, is “it just makes common sense” that two masks are “likely” better than one.

Following the natural arc of the doctor’s logic, it begs the question: Why not more than two masks, then? Now we turn to CNBC correspondent Contessa Brewer, who picked up the mantle from there.

Here's the full CNBC report from former Fox News host Shep Smith and former CBS/MSNBC/NBC correspondent and host Contessa Brewer about the greatness of not just double-masking, but triple-masking.

“The experts keep telling us that wearing masks is really about protecting ourselves — protecting others from ourselves in the event that we are contagious,” Brewer told Smith. “But, you know, if other people aren’t wearing their masks, or they’re wearing them improperly, we need to protect ourselves. So experts say you can double up with a tight-weave fabric mask for added protection.”

“Now, Virginia Tech researchers found that doubling up these cloth masks increases the efficacy from 50% to 75%,” she continued. “A three-layer mask could block up to 90% of the particles.”

One of the doctors behind that Tech study, Dr. Monica Gandhi, tweeted Tuesday that the “exact recommendation” is an N-95 mask, which is, at this time, difficult to find in the public marketplace. So in lieu of that, she is suggesting people wear a surgical mask underneath a cloth mask or to wear a double-layered cloth mask with a filter “like a vacuum bag” in between the layers. Ultimately, though, she noted that simply wearing one, single-layer mask is still better than nothing at all and pointed out that wearing numerous masks at once isn’t really practical because it will cause your voice to be muffled and “you will pull it down.”

Vice President Kamala Harris has adopted the two-mask rule. On Tuesday, when she received the second dose of her COVID-19 vaccination, Harris was wearing two masks: a surgical-grade mask underneath a black cloth mask.

It’s worth pointing out, as I did on Faithwire’s daily “4&3 Podcast,” that we have come a long way from what Fauci told Americans in March, which was that “people should not be walking around with masks” because doing so wouldn’t really do much of anything to protect them from the virus.

Fauci — as well as the U.S. Centers for Disease Control and Prevention — later changed their tune and said the previous message was intended to preserve the number of masks available to health care providers and first responders and wasn’t actually correct information.

There is evidence, of course, to show wearing cloth face masks does provide people with some protection and does safeguard the vulnerable population from falling ill to COVID-19.