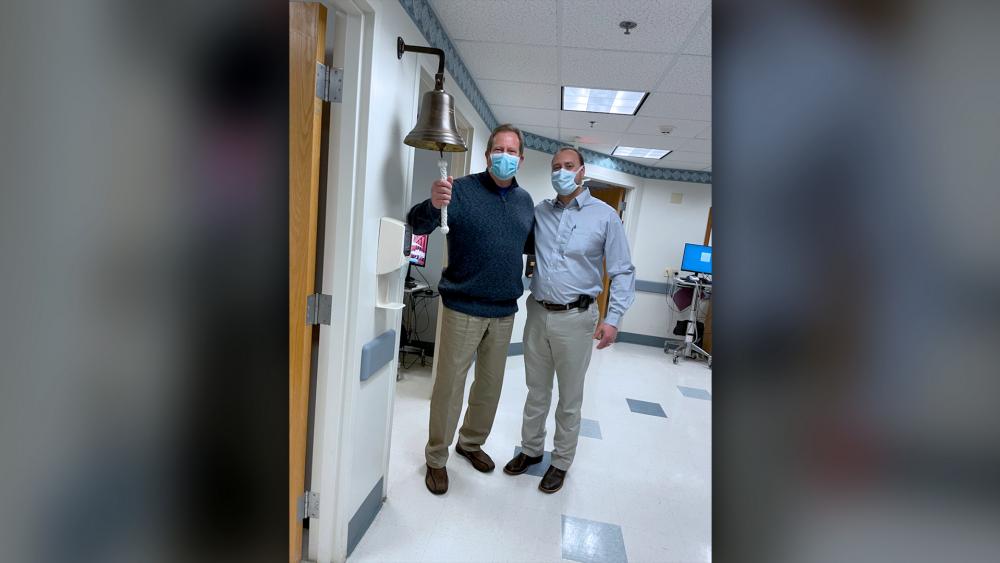 One Virginia man says prayer was instrumental while he was recovering and healing after a horrific motorcycle crash that led to 13 surgeries, countless hours of physical therapy, and learning to regain his mobility.

The 64-year-old explained that, at times, the situation seemed surreal.

"It seemed unbelievable from the standpoint that I shared the trauma floors with so many others, but I was lucky because they (doctors) had seen more people that would have lost a limb from that kind of accident," he told CBN News. "Here I was alive, and I was going to get better one day."

Surgery to repair the injuries began immediately for Stuart, who underwent his first procedure just hours after the accident. Miraculously, there was no brain, spinal or internal organ damage, but he knew it would be a long road to recovery.

After being in the trauma hospital for 19 days, Stuart was released and moved to a rehab center. He returned to a lower level hospital ahead of each surgery where he continued to make progress, all the while staying in good spirits. 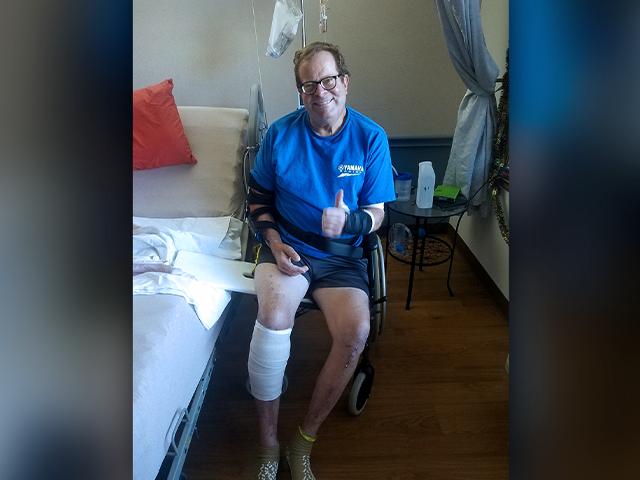 Despite the difficult moments, Stuart never got discouraged as doctors worked to restore his body.

"There were times when I didn't know what the next day would bring. I didn't know when I'd be able to use my hand again," he explained to CBN News. "There were a lot of tough scenarios, but I had to keep trying. Over time I'd see little improvements…it came in stages. In the lonely times, it seemed that God would remind me that He was there, and I wasn't alone. I had a tremendous network of support from friends and neighbors."

"A friend said to me, 'You have kissed the gates of heaven and they were not ready for you quite yet'," Stuart said. "He was in complete control of every situation."

Stuart was finally able to return home on Jan. 14, 2020, which raised a few challenges. Since he couldn't put any weight on his right leg and arm, a friend built a platform for his recliner so he could easily sit down and get up. 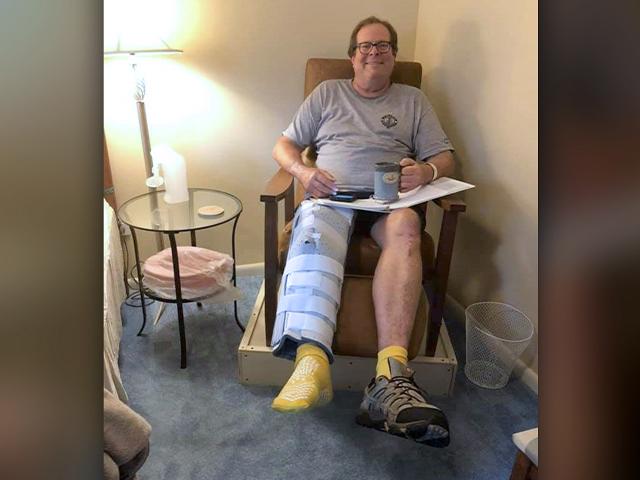 With time, patience, and prayer Stuart was able to put weight on those limbs by the end of that month, then took his first steps in February.

"I was able to take my first steps, after being rendered incapacitated from doing so 4 months ago," he wrote on a Facebook post. "What a fantastic sense of freedom to finally be able to simply walk. Just a level beyond baby steps (okay, it is more like an elderly man's shuffle)...assisted by my platform walker, mind you--but I was moving...making progress in a forward direction. What a rush. I am so grateful for all that God has done for me during the last year...I sit here totally amazed. He certainly is good, isn't he?!"

Stuart progressed from a wheelchair, to a walker, and was finally walking with a cane. And in March, he was able to use his right hand for the first time in five and a half months. By the one-year anniversary of the accident, he had started driving again and was staying busy doing projects around the house.

He had achieved these triumphs on account of his positive outlook and steadfast faith in the Lord.

"The importance of prayer was one of the central aspects of my recovery and healing," he told CBN News. "Before every surgery, I would share with the surgeon performing his life's work on me that day, that there were a number of God's people who were praying for him." 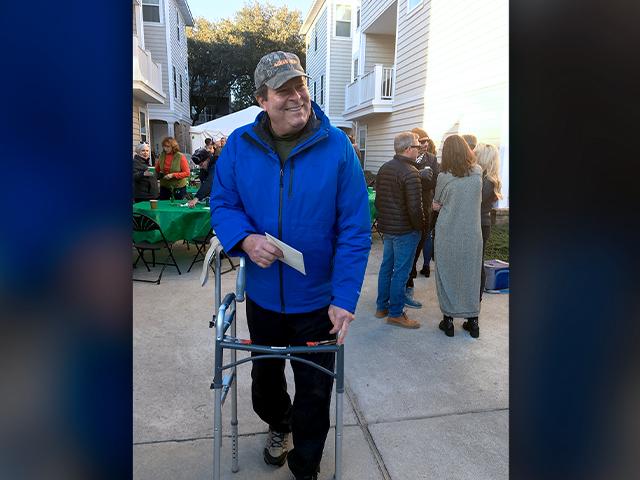 Stuart's fiancé, Jill Broome, said his optimism made the ordeal easier to bear.

"It made it a lot more endurable because he was a cheerful person," Broome explained. "There were a couple of down moments. In general, his faith sustained him and a lot of prayer from a lot of people. That made it easier for me."

A New Outlook on Life

As 2020 came to a close, Stuart reflected on all that had occurred since the day of his accident as well as what was to come.

He told CBN News that the experience had changed his outlook on life.

"It altered my perspective," he explained. "It has caused me to pause and ponder what does God have in store for me."

Stuart said he has considered volunteering as a caregiver so he can minister to those going through a similar situation as him.

"Being in the hospital for that period, I know what those people have gone through because I've been there. It certainly makes me want to try to help them through those lonely times…the difficult times when they're trying to recover. I would be remiss if I didn't use what I've learned and share that compassion. I couldn't imagine going through all this alone," he said.

"I'm more sensitive. If I hear or see an ambulance, I actually say a prayer for that person in that circumstance because I've been in that situation. I pray for those in the emergency staff. I recognize what's happening and I'm doing my part in that. I'm sure that's why I wasn't fearful - because of prayer."

Hearing the Sweet Sound of Victory

After months of hard work fueled by drive and determination, one long-awaited moment had finally arrived that signified Stuart's success. Last month, he rang the brass bell at his primary physician's office – a momentous step that means a patient has been discharged from a doctor's care.

"I was so ecstatic that the doctor said I was good enough and that I didn't have to see him anymore," Stuart explained. "It was a culmination of all that effort and time. I was so thankful that God, and through the miracles of modern medicine and His time and healing, that I was able to get to the other side of the river."

"I learned early on before COVID, how vital doctors, nurses, and medical staff are - they truly are heroes. I saw them all the time. The relationship between the patient and the staff made the experience special."

Another major moment for Stuart was returning to work as a truck driver on Jan. 6, 2021 – a feat that he says, "provided me a return to life."

He told CBN News that being back on the job was good for his physical, mental, and emotional state but more importantly his spiritual well-being.

"Scripture points out throughout its writings, of the importance of labor in a person's life while on this planet. In Ecclesiastes 5:18, the author shares his personal insights, 'Here is what I have seen to be good and fitting: to eat, to drink, and enjoy oneself in all one's labor in which he labors under the sun during the few years of his life which God has given him; for this is his reward.'"

He added, "These last few days have proved this to me, as I resumed my duties behind the wheel of my truck, making deliveries and working alongside my co-workers: 'It is good and fitting'."

"I think that if I didn't have a close connection with God prior to the accident, I wouldn't have been able to go through all that I did. It was an interesting thing that I didn't have any fear whatsoever. I knew that God was going to take care of me. His presence was always there."