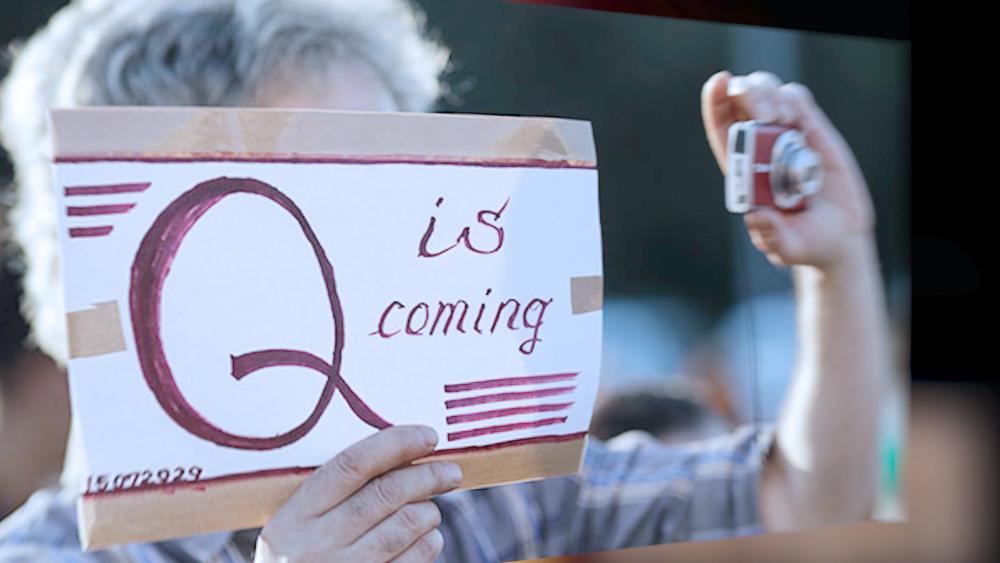 WASHINGTON – Defenders of religious liberty point to government-ordered lockdowns in an ongoing pandemic as a clear example of a threat against religious freedom. Other Christian leaders might also express concern about another issue with a lot less fanfare lurking in the shadows of America's churches: the lure of conspiracy theories.

From the moon landing to 9/11, conspiracy theories abound—including one that influenced the Nashville Christmas bomber centering on politicians and Hollywood celebrities actually being lizards.

One of the most sweeping conspiracies that has gained traction in the last three years is QAnon.

Its adherents believe they're working to expose a purported global network of political and entertainment elites involved in child sex-trafficking. They also believe the champion of their cause is none other than President Donald Trump.

Even after the November 2020 election, people who closely follow QAnon see Trump as a man on a mission, a belief reinforced on social media where followers produce videos depicting Trump as a superhero.

In a heavily doctored video highlighting the battle against good and evil, the president's face is superimposed onto Charlton Heston's body in the iconic classic film "The Ten Commandments" by Cecil B. DeMille. In it, Trump mimics Moses's famous "Who is on the Lord's side" declaration by asking instead "Who is on freedom's side?"

The comparison, along with QAnon's sprinkling of scripture in codes, has troubled a growing number of Christian leaders—including pastors and theologians.

"There are probably people in just about every evangelical church who aren't sure what to think about it," noted Albert Mohler, president of the Southern Baptist Theological Seminary. "That's one of the reasons why I think we need to talk about it."

As the conspiracy broke into Christian communities and started making headlines in major publications last summer, Mohler joined a chorus of prominent Christians who came forward to denounce QAnon.

Mohler also criticized what he called a liberal media bias that has sent people searching for reliable sources but ultimately leads to questionable material.

"Our response to that has to be even truer than the mainstream media," he said. "It has to be more based on objective, verifiable truths."

Part of the intrigue for followers revolves around the mystery surrounding the anonymous person, or people, behind the conspiracy and cryptically worded posts that reveal classified information through what are referred to as "Q drops."

For Johnson, the use of scripture along with sensitive intelligence from someone with a high-level security clearance is a red flag.

"It's not just straight letting information out. It's sounding the alarm. It's actually a bit of campaigning," he explained. "It reminds me of psyops and propaganda." (PSYOPS is a military term that refers to psychological operations warfare.)

For Mohler, whose world is centered on theological study, it all boils down to two issues, starting with credibility.

"We want to speak of the Gospel as true, not true-ish," he explained.

"If we're found to be communicating things that turn out not true in other areas of life, it weakens our witness to bear the truth of Christianity—to bear witness to the Gospel of Jesus Christ—the only message that saves," Mohler continued.

He also points to a historical rift within the early Christian church where Gnostic believers claimed salvation through secret wisdom. Mohler notes the apostle John called that heresy.

"He speaks of Jesus Christ, whom we have seen; whom we have touched with our hands; whom we have heard in the flesh: it's public truth," Mohler said. "But if you have secret knowledge, that's at the expense of biblical Christianity."

While QAnon has rallied like-minded followers, it is also responsible for family breakups, with personal accounts of heartbreak filling up internet message boards. Meanwhile, other adherents have wound up in legal trouble breaking the law, including cases involving vandalism, violence, kidnappings, and even charges of murder.

Darrell Bock, a New Testament scholar at Dallas Theological Seminary, has written dozens of books on the Bible and culture.

He says if the claims QAnon levels against certain people are untrue, there is yet another issue at odds with biblical teaching.

Still, each of the three leaders CBN News interviewed agreed while most who follow QAnon have the right motivation, they chose the wrong path.

"We don't want to 'villain-ize' or demonize people who hold these views. Most of these people are really, really good people," Johnson stated.

"There's maybe some really good political instincts coupled with real desire to live out Christ in this world – to be thoroughly biblical in everything that they do. Sometimes when you mix these elements together they don't mesh as neatly as we think," he explained.

Bock believes when it comes to waging the battle between good evil, followers of Jesus should take a page from early Christians who faced violent persecution.

"The church in the First Century had no social power, no political power, no ideological power; but what it did have was spiritual power. And that spiritual power was the authenticity of their lived-out faith and the way they related to those around them," Bock told CBN News.

"They did quite well in that period. I think we could afford to learn lessons from the First Century church."

QAnon's hold has survived an FBI label as a domestic terror threat, an attempted social media ban, and even the November election results. And while the clues from the person or people behind the conspiracy aren't as frequent, there's growing chatter among Q adherents who are closely watching to see if their convictions will come true.

For followers of Christ, the thought leaders CBN News interviewed said the only place for Christians to securely put their hope is in Christ.