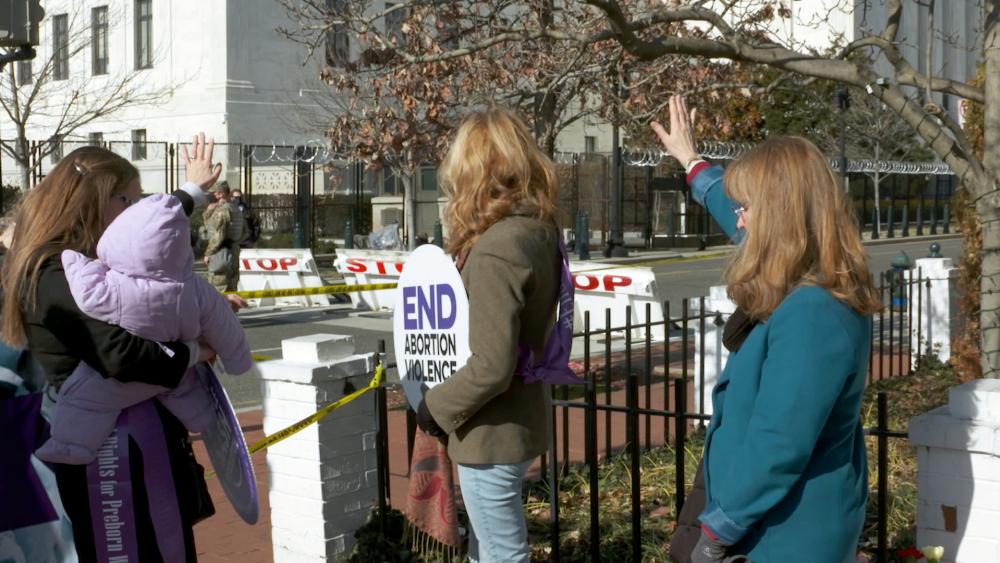 Those involved in the battle over abortion have seen America swing in January from the most pro-life president of the modern era to possibly the most pro-abortion commander-in-chief. So now those dedicated to the pro-life cause have to consider what kind of damage a Biden presidency can do to their efforts to end abortion.

Just after Joe Biden's inauguration, pro-life Americans gathered by the U.S. Supreme Court for a memorial to the nation's nearly 63 million aborted unborn and to pray that killing any more will become unthinkable.

They also realize, however, they now face an administration likely to make abortion more acceptable to people than ever.

Brandi Swindell opened a pro-life pregnancy center right next door to a Boise, Idaho Planned Parenthood. She came to Washington D.C. for the same memorial.

Trump's Pro-Life Moves to be Rolled Back

Looking ahead, this leader of Stanton Healthcare stated, "It's going to be sad. A lot of good that the Trump administration did on the life issue: a lot of those things are going to be rolled back by the Biden administration. We're already seeing that."

Michelle Shelfer counsels women trying to recover from their grief over abortions they've had. She's sober-eyed about the change that's come to Washington.

Speaking of the Trump years, Shelfer said, "We had hopefulness and now we're going to be going back towards the direction that we were in when we were under earlier administrations."

But this author of Prepare a Room: A Path to Peace and Healing for Those Hurt by Abortion refuses to be discouraged or back down.

"I think we have to still stand strongly for the morality of the pro-life position in the face of any kind of political situation," Shelfer opined.

"Presidents change, legislators change. Judges change, but God never changes," Karlen told CBN News. "And the pro-life movement, including 40 Days for Life, I think, has seen some of our biggest successes with pro-abortion presidents."

Maybe those wins came because pro-lifers pray and fight harder during those years. If that's the case, they're going to need that resolve now more than ever. Because with Democrats controlling both houses of Congress and the White House, it means a unified front making abortion more available.

Danielle D'Souza Gill, the author of The Choice: the Abortion Divide in America, pointed out, "That's, unfortunately, something the Left is really focused on, and I know that in Sex Education classes and all these things happening in schools, they will definitely be pushing abortion more."

The Law is a Teacher

And the push will be for laws to make abortion feel more acceptable and "right."

Karlen said of such a push, "It would definitely be a setback because the law is a teacher. Right or wrong, we have this natural tendency to look at the law as guidance on what is right and wrong.

The author of This Is When We Begin to Fight continued, "For all the talk that 'well, you can't impose your morality via the law – you can't legislate morality' – that's exactly what people look to the law to do, to help us do what is right and to help us avoid what is wrong."

One of the pro-abortion movement's goals might go too far, though, if they end the Hyde Amendment, a rule in Congress long supported by both sides. If it goes, that means all American taxpayers would have to contribute towards federally-funded abortions.

Gill stated, "Not just radical Democrats, but even moderate Democrats -- as many may think Biden is -- want to repeal the Hyde Amendment."

They'll argue that abortion is a right…and even a necessity.

Gill said of these backers of abortion, "I think that kind of goes back to the idea that this is a fundamental right.  They claim that this is something that women have to have in order to be successful and so on. So because of that, if poor women cannot afford it, the government has to pay for it."

'What We Subsidize, We Will Expect to Increase'

The problem is, if you make something free, people are more likely to want it.

Or as Karlen put it, "There's definitely a movement to subsidize abortions. And what we subsidize, we will expect to increase.

He added, "If we suddenly have a government that is providing federal funding for abortion, that would be a step in the wrong direction, and that would be a tremendous challenge for pro-lifers."

Another fear of these big government moves: the Biden administration might well try to wipe out any state's law that limits abortion more than national law. In its literature, the Biden campaign promised, "…his Justice Department will do everything in its power to stop the rash of state laws that so blatantly violate Roe v. Wade."

Already, Washington is basically unlimited in allowing abortions, even into the 9th month of pregnancy – a practice also allowed only by countries like China and North Korea.

"There is no real meaningful restriction on third-trimester abortions, for example, in federal law. So shockingly, we don't have much further to fall on that front," Karlen said. And he added, "We're one of a handful of countries worldwide, countries like China and North Korea, that allow these gruesome late-term abortions. And, man, when we find ourselves on a human rights list next to China and North Korea, it is a sign that something has gone dramatically wrong."

Meanwhile, Gill is concerned about the influence of celebrity culture in the coming days.

"They will probably elevate the voices of people like Michelle Williams and other celebrities who've talked about how they wouldn't have their Golden Globe award and so on if they hadn't got an abortion. Probably more people like that will be kind of idolized and put on a pedestal," Gill worried.

One result of all this could be a backlash among the American people. The majority tend to be far more anti-abortion than these pro-abortion moves would indicate.

Most Americans Aren't with Them

Gill said of today's most ardent abortion backers, "Their radical views of 9th-month abortions, taxpayer-funded abortions – most Americans don't support either of those things."

Swindell said of being a pro-life activist in the world the pro-choice types are creating, "It's going to be more difficult. We're going to have to do a lot to resist some of the radically pro-abortion things they're going to try to pass."

Speaking on Capitol Hill, Mahoney said, "If I were standing in front of the Capitol 30 years ago, there would have been 2,200 abortion clinics in America. Today, there's under 700. We are seeing Americans more embrace a culture of life regardless of what happened in the elections on November 3rd."