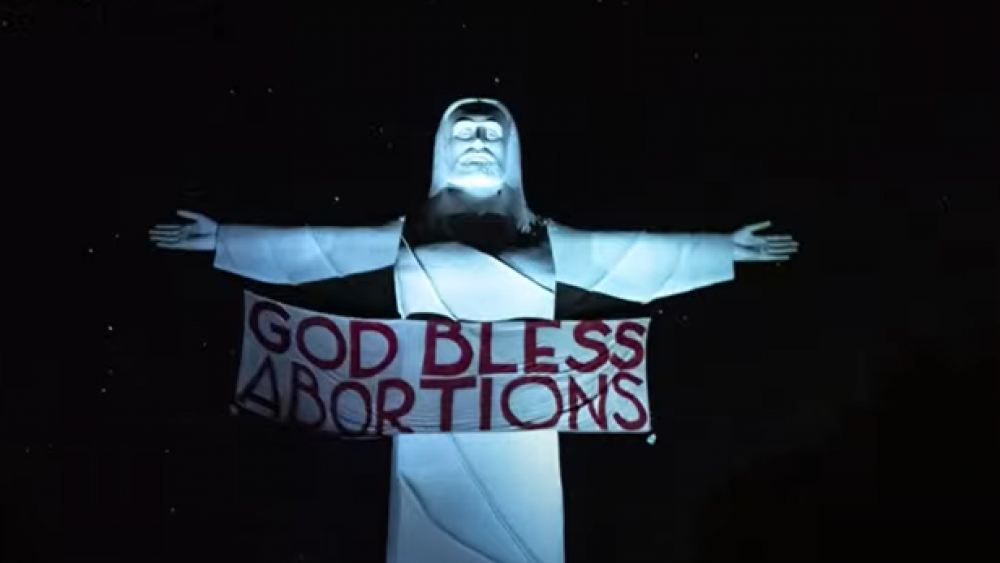 A group of protesters, who claim to be artists, are boasting about a pro-choice statement they made Thursday after hanging a banner from a Jesus statue in Arkansas that reads "God Bless Abortions."

Indecline, an activist art collective started in 2001, draped the 44-foot sign across the Christ of the Ozarks statue in Eureka Springs as a "direct response to the dramatic attempts being made in Arkansas and throughout the South, to ban abortion services to women in need."

KNWA News reports that the group dressed up to resemble construction workers, then snuck onto the property to hang the banner.

"We think Jesus would understand the concept of a difficult decision," Indecline wrote on a social media post. "He supposedly had to make a few of them and understood sacrifice very intimately. The Christ of the Ozarks is visible from miles away, so we just treated it like a billboard."

Randall Christy, curator of the monument, says he's disturbed by the move and the message.

"Lord help them," Christy said. "Maybe He'll somehow touch them and make them realize how bad that message really is."

According to KNWA, Christy plans to press charges against Indecline for trespassing and vandalism.

A spokesperson for Indecline emailed the following statement to CBN News regarding the incident:

"Our collective has 20 years of experience with threats stemming from our actions, particularly when the fanatical advocates of the issues we tackle have their feelings hurt. We are happy to accept criminal charges knowing full well that the incompetency of the prosecuting parties will further highlight the importance and effectiveness of the work we do and inspire others to do the same. We also believe that walking into a Jesus theme park at night and hanging a banner that was removed the following morning is a far cry from the draconian laws Arkansas politicians are pushing on women in need. If people can't see that, they need their moral compass recalibrated. "

And this is not the group's first disturbing project that advocates abortion.