An Awkward Moment for Pro-Socialism Democrats: Is the Left Ignoring the Cuban Fight for Freedom? 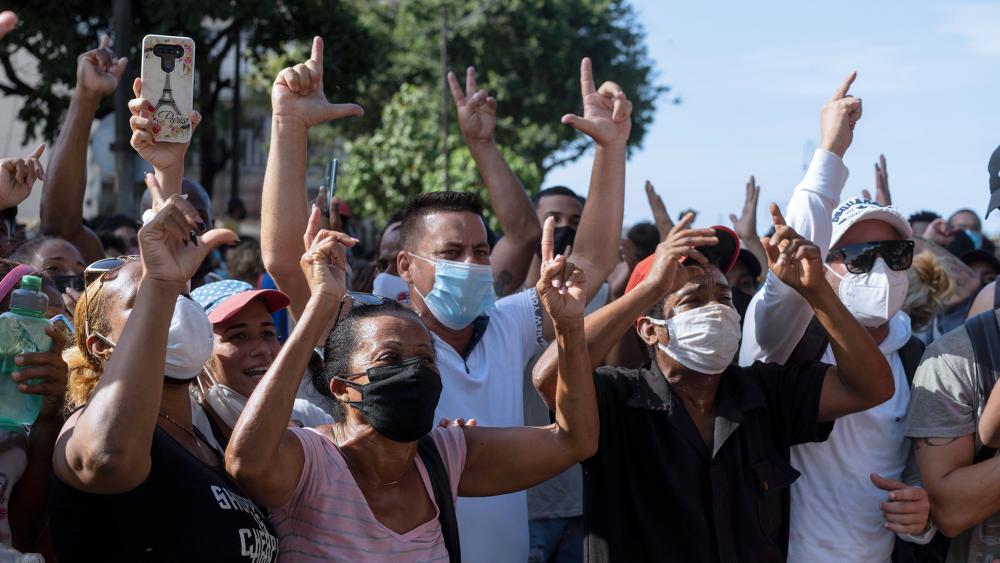 Protesters march in Havana, Cuba, July 11, 2021. Hundreds of demonstrators took to the streets in several cities in Cuba to protest against ongoing food shortages and high prices of foodstuffs. (AP Photo/Eliana Aponte)
6265594012001
An Awkward Moment for Pro-Socialism Democrats: Is the Left Ignoring the Cuban Fight for Freedom?

"Where is Biden?" That's what Cuban-Americans are asking in the absence of any ongoing support from the White House for the pro-freedom protests in Cuba.

America is supposed to be a beacon for all people who want to be free. But the Left's reaction to the Cuba protests shows they're a lot less supportive of freedom when it comes to communist dictators.

As the protests in Havana against Cuba's communist dictatorship continue, Cuban-Americans are also protesting, and some are chanting, "Where is Biden? Where is Biden?"

To his credit, Joe Biden actually did express support for the Cuba protests early on. But critics say the administration could have done a lot more to encourage the protestors and hasn't.  And the reaction from the so-called progressive wing of the Democrat Party and the mainstream media has been downright strange.

The New York Times was ripped for labeling the protestors' calls for freedom "anti-government slogans."

Department of Homeland Security Chief Alejandro Mayorkas warned any potential Cuban refugees they would not be allowed to enter the U.S., even as record numbers of illegal migrants have poured over the U.S. southern border, causing some to wonder if it's because people fleeing socialism would be more likely to vote Republican.

Then, Democrats like Rep. Alexandria Ocasio-Cortez blamed the hardships in Cuba not on socialism but on the U.S. economic embargo, even though Cuba can get anything it wants from the many other nations it trades with.

In a statement supporting the protests, Cortez wrote: "we must also blame the US contribution to Cuban suffering: our 60-year embargo." She also called the embargo "absurdly cruel" and said "the cruelty is the point."

But Rep. Nicole Malliotakis (R-NY) replied on Fox News Sunday, "Alexandria Ocasio-Cortez is nothing more than a communist sympathizer who wants to bring socialism to the United States of America and I'm sure she sympathizes with the regime in Cuba."

Whether or not that's true, AOC has made no secret she is a proud socialist.

She was called out about it on the Late Show with Stephen Colbert: "But I want to point out, 'she's a socialist. She wants 70% tax rates,' those are both accurate right?" AOC laughed when she confirmed, "Yeah, I guess so."

Sen. Bernie Sanders – an avowed socialist who honeymooned in the Soviet Union during the Cold War – last year defended his positive comments about Fidel Castro from the 80s:

"We're very opposed to the authoritarian nature of Cuba, but it's unfair to say everything is bad, you know, when Fidel Castro came into power, you know what he did, he had a massive literacy program. Is that a bad thing?"

The grandson of Cuban refugees, Jason Poblete of the Global Liberty Alliance thinks the U.S. is missing a golden opportunity to bring real change to Cuba because the protests shatter myths about Cuba held by many on the Left.