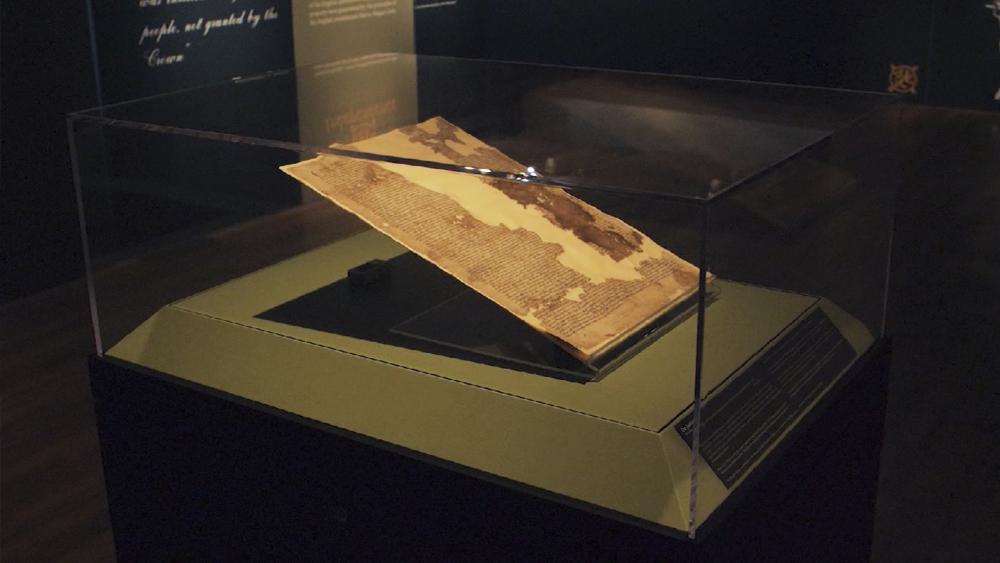 WASHINGTON - The Museum of the Bible just opened a special exhibit on the Magna Carta, the historic "Great Charter of Freedoms" from England, first written in 1215 A.D. The display boasts some of the most precious artifacts in the western world, and tourism officials hope it's the type of exhibit that draws visitors back to the city.

"Everybody knows about Magna Carta, but most people, I would assume, don't know that the first clause of the Magna Carta is about the freedom of the church and that one of the authors of Magna Carta is an archbishop, Stephen Langton, who is a biblical scholar and used his theological knowledge and expertise to use the Bible to argue against what the king was doing," explains Jeff Kloha, Museum of the Bible Chief Curatorial Officer who carefully coordinated the exhibit during the pandemic.

The Magna Carta was revised several times. The museum has the version from the year 1300 which was viewed by American founding father Thomas Paine, author of the pamphlet "Common Sense" along with the 1217 version that started something spectacular.

"So, the 1217 document is essentially the one that goes on to become English law," says Luke Purser co-founder of Hawkwood International which arranged for the exhibit.

Also on display: the Charters of the Forest that re-established certain rights for the lower classes of the period and were issued in conjunction with each Magna Carta.

There's also a medieval sword, a replica of King John's bejeweled clothing, and a lawyer's reference copy of early English law - not to mention a letter from Lord Cornwallis to George Washington at Yorktown requesting terms of surrender.

Despite the Magna Carta's message of individual freedom, the exhibit also points out the extreme antisemitism of the time. In 1217, the king's regent issued a dire directive.

"Which made it a law, Jews in England had to wear a badge on their clothes to identify themselves, so England becomes the first country in Europe to make this a requirement," explains Purser.

The exhibit includes the Codex Valmadonna which dates from 1189, the only known Jewish text to survive the eventual expulsion of Jews from England in 1290.

"And so part of our story is that rights need to be defended and justice needs to be continuously fought for," says Kloha.

It's the type of mega-attraction tourism officials in Washington, D.C. and cities across the country hope will draw in badly missed tourists.

"It's exciting to be where we are, but to really look at the economic hit that we've taken as an industry has been a very difficult road," Elliott Ferguson, president and CEO of Destination DC tells CBN News.

In Washington, tourism generates $8 billion and accounts for 80,000 jobs. Typically the city hosts more than 20 major conventions. This year they'll only host three.

Tourism officials are marketing to people who live within driving distance of the city, all 50 million of them, and Ferguson points out while most cities are open for business, tourists should expect some changes.

"Keep in mind," he says, "that if you're coming to the city and you're traditionally accustomed to going into the Smithsonian or the Zoo, which is also Smithsonian, you now have to go online to get time tickets, so you don't want to show up without a ticket."

At the Museum of the Bible curators are excited to show visitors the Biblical basis for the Magna Carta which inspired the freedoms we enjoy in America today.