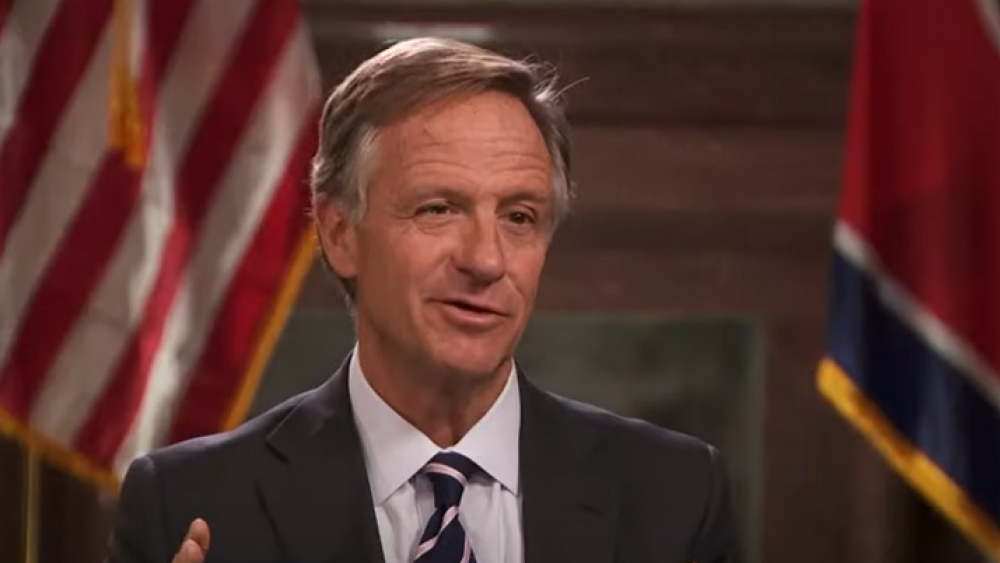 Former two-term Tennessee governor and mayor, Bill Haslam, has a new book, Faithful Presence: The Promise and The Peril of Faith in the Public Square which opens the conversation to Christ-following communication, and behavior for the unique and redemptive role of faith in politics.

Haslam has been embedded in the politics and policy at local, state, and federal levels, from health care and welfare to pardons and free college tuition. His book calls for the unique and redemptive role of faith in politics.

CBN's Tom Buehring sat down with Haslam to discuss how American faith and political views are becoming deeply intertwined.

The following is the transcript of the interview.

Tom Buehring: "The public square, more of a fighting octagon! What has fueled that intensity?"

Bill Haslam: "Since our country's founders, there's been battles. But here's what's new! You can choose where you get news from a variety of places. You can also go on social media and talk to people who look and think and act like you do. So it's made all of us think, not only are we divided, but we're mad and we're impugning bad motives to the other side as well!"

Tom Buehring: "There is the ongoing concern that American democracy is in trouble. What concerns you most?"

Bill Haslam: "We've lost the desire for real dialogue! The subtext of the Constitution is – there would have to be negotiation back and forth. Some of our folks think our job is to play a senator on social media or play a governor on social media. Instead of, 'I'm going to sit down with the other side and see if we can solve the problem.'"

Tom Buehring: "What do Christians fear most, do you think in what they're losing politically?"

Bill Haslam: "I think, unfortunately, a lot of us have become driven by fear! We look at the world around, it's changing really fast. Cultural norms are very different now than they were. Feels like we've gone from being the home team to the visiting team in about three decades. Paul writes, you know, 'Beloved, I urge you as aliens and strangers'! We worry more about losing our country than we do losing our God!"

Tom Buehring: "How has Christianity lost its credibility as a faithful presence in public debate?"

Bill Haslam: "Okay, we are just as likely to send some flaming retort on the internet and say something I'd never say to your face. Jesus was really clear on the sermon on the mount that the message was – be different!! The salt is supposed to be different than the meat. The light is supposed to be different than the dark. And we're not! We're acting just like everyone else. And if the salt has lost its saltiness, it's good for nothing except to be thrown out! We're not holding up our end of the deal and the consequences aren't great!"

Bill Haslam: "Well, I think a lot of us have come to define truth by what we think politically and faith is going to follow what I believe. And so somehow we think that the biblical injunctions about how we're supposed to act – don't apply to politics. They apply everywhere else but politics – it matters too much! That the ends matter so much that the means are okay even if they're not biblical means."

Tom Buehring: "Christians in the public square. What should the reputation be?'

Bill Haslam: "James writes about earthly wisdom and wisdom that's from above. And so if it's wisdom from above that should be what we're known for, right? Christians as open to reason, impartly, sincere, pure, gentle, full of mercy. I don't think many people would agree with us. Unfortunately, they'd say, 'no they're pretty strident."

Tom Buehring: "Politics is a blood sport in a contentious culture. How then do the meek compete?

Bill Haslam: "Meek does not mean weak! Jesus says, 'Blessed be the meek', because those are the folks who understand that we're not perfect. That we enter the public square the same way that we enter our homes and our businesses as imperfect, broken people."

Tom Buehring: "What can the church bring to the public square, altogether absent from politics?"

Bill Haslam: "We can bring some unique gifts to the public square. We can be, and people, truth and love, mercy and justice. Change the conversation! We've been given a spirit of humility and if we'll just act in that, hear humility out of someone and go 'wow, that's a lot more enticing and persuasive than being yelled at'. You know we should have words that are persuasive and winsome that would actually change people's minds."

Tom Buehring: "The thirst for power and self-promotion comes with the territory. For the divine mandate of genuine, servant-minded management. Has narcissist leadership been overlooked or unconsidered within spiritual leadership?"

Bill Haslam: "I think the problem is a real one! We see the issues all the time, they manifest themselves in different ways, and at the heart of a lot of that is - narcissism thinking - 'this story is about me and God can't pull this off without me'! I think we're paying the price for it in terms of the image of our faith, every time it happens, and in terms of the effectiveness. Christians are called to self-sacrifice, which is really different than self-actualization. And we're infected with it too! And so I think the call is stronger now than it's ever been!"