Swallowed by a Whale: A Modern Day Headline with Biblical Overtones 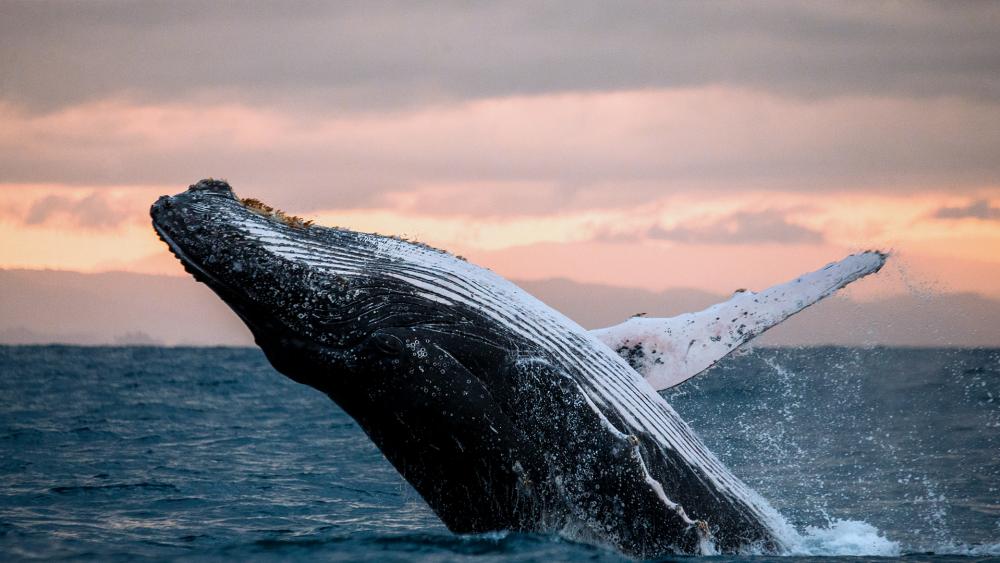 In a story with biblical overtones, a lobster diver says a whale tried to swallow him, but he was able to get out alive.

The Cape Cod Times reports 56-year-old Michael Packard says he was underwater when he felt a shove. Then things went completely black, and he realized a whale was in the process of swallowing him.

"I could sense I was moving, and I could feel the whale squeezing with the muscles in his mouth," he said.

At first, Packard thought his attacker was a great white shark, but he hadn't suffered any serious wounds that a shark's razor sharp teeth would cause. That's when he realized he was in a whale's mouth.

"I was completely inside; it was completely black," Packard told the newspaper. "I thought to myself, 'there's no way I'm getting out of here. I'm done, I'm dead.' All I could think of was my boys — they're 12 and 15 years old."

Wearing scuba gear, he struggled and the whale responded by shaking its head. Then the animal abruptly surfaced.

"Then all of a sudden he went up to the surface and just erupted and started shaking his head. I just got thrown in the air and landed in the water," Packard told WBZ-TV. "I was free and I just floated there. I couldn't believe. . . I'm here to tell it."

Captain Joe Francis, who was working on his fishing boat nearby, told the television station he witnessed Packard's narrow escape.

Packard later estimated he was in the whale's mouth for about 30 to 40 seconds.

He was released from a local hospital Friday afternoon with what was described as "a lot of soft tissue damage." Packard, a diver with more than 40 years experience, told the Cape Cod Times he'd return to diving as soon as his injuries healed.

Peter Corkeron, a senior scientist at the New England Aquarium, told WBZ-TV that when humpback whales feed, "they do what we call gulp feeding, and they can open their mouths up incredibly widely."

"It's a very unusual accident. . . this is a one in a — goodness knows what — trillion chance," he said. "He was just unlucky enough to be in the wrong place at the wrong time."

Social media was abuzz with Packard's whale of a story on Friday with many including references to the Bible's story of Jonah.

Anyone who has doubts about the Jonah & the whale story in the Bible needs to read this article published in the Huffington Post: https://t.co/f9PYEfbwht Note the comment about the altruistic behavior of whales toward humans and the whale surfacing before spitting out the diver

According to the Bible's Old Testament book of Jonah, the biblical prophet was instructed by God to go and preach to the city of Nineveh. But instead of going to do what the Lord had commanded, Jonah fled.

"The word of the Lord came to Jonah son of Amittai: "Go to the great city of Nineveh and preach against it, because its wickedness has come up before me."

Then the Lord sent a great wind on the sea, and such a violent storm arose that the ship threatened to break up. All the sailors were afraid and each cried out to his own god. And they threw the cargo into the sea to lighten the ship.

But Jonah had gone below deck, where he lay down and fell into a deep sleep. The captain went to him and said, "How can you sleep? Get up and call on your god! Maybe he will take notice of us so that we will not perish."

He answered, "I am a Hebrew and I worship the Lord, the God of heaven, who made the sea and the dry land."

This terrified them and they asked, "What have you done?" (They knew he was running away from the Lord, because he had already told them so.)

The sea was getting rougher and rougher. So they asked him, "What should we do to you to make the sea calm down for us?"

"Pick me up and throw me into the sea," he replied, "and it will become calm. I know that it is my fault that this great storm has come upon you."

Instead, the men did their best to row back to land. But they could not, for the sea grew even wilder than before. Then they cried out to the Lord, "Please, Lord, do not let us die for taking this man's life. Do not hold us accountable for killing an innocent man, for you, Lord, have done as you pleased." Then they took Jonah and threw him overboard, and the raging sea grew calm. At this the men greatly feared the Lord, and they offered a sacrifice to the Lord and made vows to him.

Now the Lord provided a huge fish to swallow Jonah, and Jonah was in the belly of the fish three days and three nights. From inside the fish Jonah prayed to the Lord his God.

In verse 10 of Jonah chapter 2, we are told God told the fish to release him: "And the Lord commanded the fish, and it vomited Jonah onto dry land.

Then the word of the Lord came to Jonah a second time:  "Go to the great city of Nineveh and proclaim to it the message I give you."

Jonah obeyed the word of the Lord and went to Nineveh."  -- Jonah 1:1 through 3:3. (New International Version)