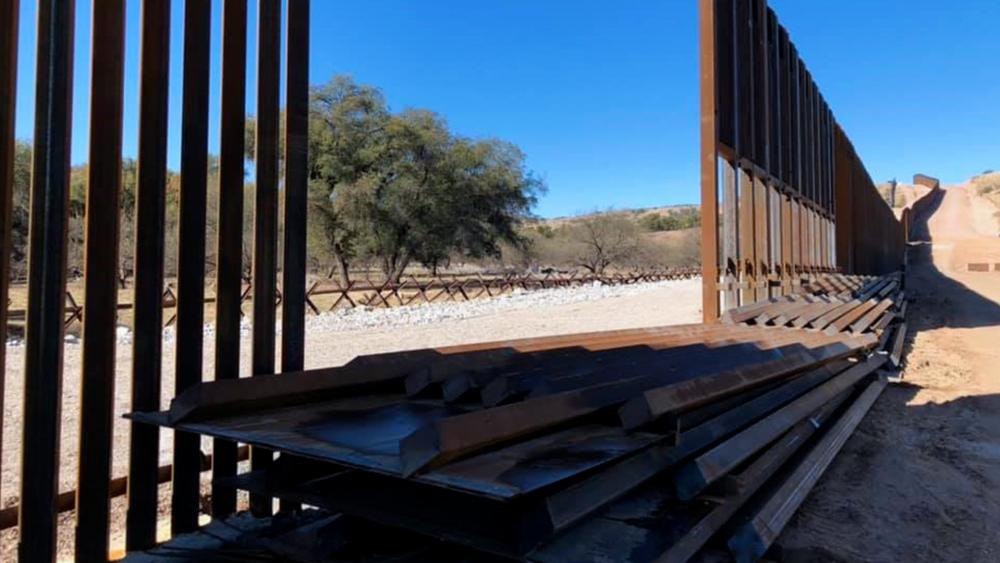 He recently visited the Arizona border where he exposed the literal gaps that remain, even though the materials have already been purchased and are already on site.

"You can see the giant gaps in the fence for yourself in this video. It's ridiculous the fence is 95% and won't be completed. This is a problem created by Biden's administration--stopping construction weakens the effectiveness of the fencing structure and the technology. It makes no sense," he said in a Facebook post from the border.

"On January 20th, in one of the first official acts of his presidency, Joseph Biden suspended border wall construction and ordered a freeze of funds provided by Congress for that purpose," the senators wrote. "In the weeks that followed, operational control of our southern border was compromised and a humanitarian and national security crisis has ensued. The President's actions directly contributed to this unfortunate, yet entirely avoidable, scenario. They are also a blatant violation of federal law and infringe on Congress's constitutional power of the purse."

The senators continued, "We write regarding these actions. We believe they violated the Impoundment Control Act (ICA), as interpreted by your office, and we request your legal opinion on the matter. Prompt action to end these violations is required to restore order at the border."

The full text of the letter is linked here.

Here is a transcript of some of Sen. Lankford's remarks in the Senate this week:

Let me say a couple of things that I saw this weekend that might be helpful to get the context.

The folks that I visited with at HHS that are there taking care of the unaccompanied minors that are coming in, and we are seeing a significant surge of unaccompanied minors because the Biden Administration has now changed the policy and said, 'If you're 18 years old and up because of the pandemic, we're not going to allow you in.' It's called Title 42 authority. The Trump Administration had actually put that in place. And so during the time of the pandemic, we're trying to limit cross-border traffic. You can't just come in. The Biden team has now changed that and said, 'If you're 18 and up, you can't come in immediately. But if you're 17 and down, you can.'

And so what are we seeing? A massive surge of unaccompanied minors right now. Literally an invitation to say, 'You can come but don't bring your family with you.' When I sat down with the folks at HHS there who are doing a fantastic job doing the best they can to be able to take care of those kids, I asked them, 'What are you seeing?' And the vast majority of the kids that they're seeing coming across the border are 16 and 17 year old males.

So when you hear the term, we've got all these kids coming across the border, sometimes as Americans we think these are five-year olds crossing the border. They're not. The vast majority of them are 16 and 17 year old males coming across the border. They're also being transported to individuals that are here in the country that are family members that are already present here in the country, most of those also illegally present the country. Their uncles and aunts, their cousins, brothers, and sisters that are already here, because we have separate categories in how we actually transition those kids into someone to be able to take care of them before they have their court hearing. Most of those court hearings will take two years. So they're crossing the border, 16 and 17-year old males, being connected with an uncle that's already here many times illegally as well. And they'll have for the next two years to be able to be here before they have a court hearing to be able to go through the process if they come to the court hearing.

When I visited with the folks at Customs and Border Protection they were frustrated with the lack of funding that's been given to them to be able to take care of the needs for that particular facility and helping to manage the number of people that are coming through.

They need additional assistance because in that very old facility they need additional barriers to be able to just help them manage the flow of people as they come through. And when I visited with Border Patrol, we drove just a couple of miles out into the desert just to the west of this town of 450,000 people to go see the new fence that's being constructed. Now it may be hard to be able to see in this, but miles and miles of new fencing are going in, but on the day January, the 20th, construction was halted. And in this particular area, miles and miles of fencing, except for these gaps in the fence. See those gaps were put in there to be actually gates. So if they have to take care of the fence, they can get access to both sides of it for this miles and miles and miles and fencing is done except for the gate area and literally the steel for the gates are laying on the ground. Why in the world would you do construction and have it stop to say you can build everything except close the gates?

The Border Patrol team has literally drug over some of the steel just to be able to stack in front of the gaps that are in the fence here to keep vehicles from driving through and tried to put different barriers there to try to slow down the traffic. And for every one of these gaps along this miles and miles of fence, they're having to assign a Border Patrol agent there just to be able to sit at that gap because it's the obvious place just to be able to literally walk through the fence. There's only one reason that you would have a fence like this for miles and miles and leave it open as a gap: to allow people through.

Worse than that, all the way through this construction area is just a dirt path they've used for construction. But in the contract itself, it was set up to be able to allow for the fence construction is first—because remember this is a wall system, there's technology and wall—walls are medieval, and I get that. But there's a reason we still use fences in our backyard and there's still a reason that we use fences as barriers because they work. They slow people down from actually crossing that barrier. But it's a wall system in place.

So for this for miles and miles and miles in the contract and as it's written, they put up the fence first, close up the gates second and then they finish the road, so Border Patrol can actually pass through here even when it rains in this area to have a simple road passage there and then they put in ground-based sensors, so they can detect when people are walking across, and then they put in lights and cameras, all the technology that we talk about in this room. I can't remember how many times I've heard my Democratic colleagues say, 'Fences are old. Let's just do the technology.' Technology can help manage this. In this situation the contract is out and done. The fence is already installed except for the gates, but no technology is there.

So literally the Biden team stopped before what even they claim is the effective part to stop people from illegally crossing the border. $1.6 billion was paused. That 1.6 goes to simply closing the gates and installing the technology. That's what remains. This is nonsensical. I understand the Biden team and some of my Democratic colleagues want a more open border. They've been clear on that. But this does not provide security for our nation. This is the result of saying, 'I don't want any more wall.' This nonsensical system on our southern border with literally open areas that you could drive a truck through and where Border Patrol agents have to then sit at rather than monitor large areas. They're stuck monitoring the open door.

Listen, we can have arguments about immigration, but supposedly we all agree we should have border security. At least we used to. This doesn't make sense, but this is now the reality and it will sit like this for, we don't know how long, maybe forever, until we as a nation determine this has got to change. Is it an open invitation?

Have things really changed significantly on the border? Let me give you an example that's pre COVID. Pre COVID, February of last year before COVID came through—so don't say that things have changed in COVID. February of 2020, we had under 40,000 people that were apprehended crossing our southern border that month, under 40000 pre COVID, that's transition and an arrest process. This February with the only thing changing being the change of presidents, we had over 100,000 people illegally crossing the border.

One year later, we go from less than 40,000 to over 100,000. This is a manufactured crisis that's happening on our border, a halting of closing up the holes in the fence, statements about we're going to do a moratorium that we're not going to have anyone deported anymore, changing the rules on unaccompanied minors to basically invite them to come into the United States again in statements like, 'Caravans. I would just tell them to pause, we're not quite ready for you yet,' is really not going to be a pause at all. That's going to be an invitation and that's not me saying that. It's the thousands and thousands of people that are coming to be able to connect with relatives that are already here and to be able to walk through a process to be able to go around our visa application process, to be able to go around legal immigration.

This is welcoming people to do it the wrong way and that does not help our security as a nation.