To Shoot or Not to Shoot: The Training That Helps Officers Make Split-Second Life and Death Decisions 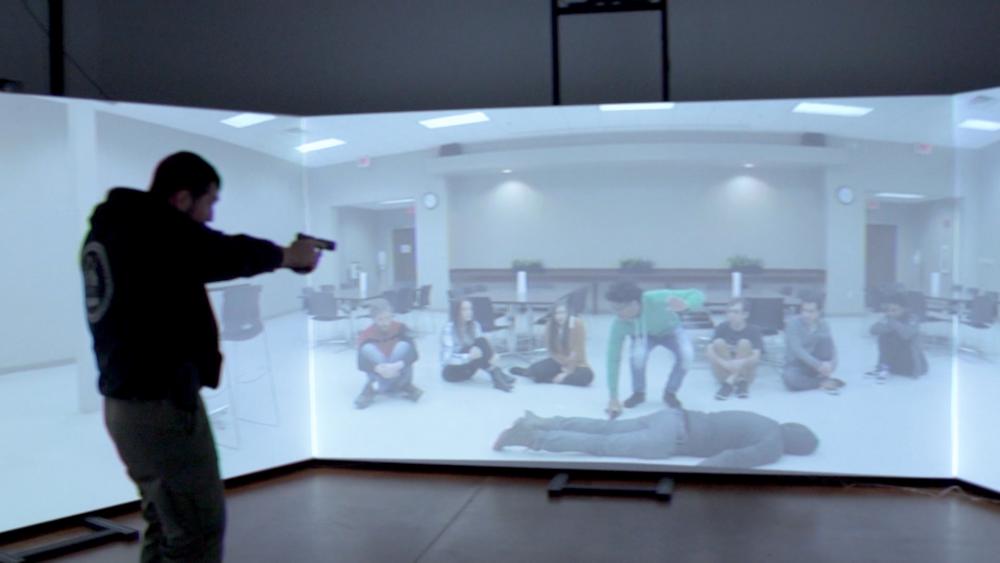 6240913507001
To Shoot or Not to Shoot: Simulator Training Helps Officers Make Split-Second Decisions in Real Life

To shoot or not to shoot: that's the question police officers often have to answer in just a split second. The pressure to make the right decision is only increasing following the number of high-profile shootings in 2020.

Law enforcement officers face a critical balancing act each shift they work. They strive to follow the law, protect and serve citizens, and then safely return to their own families at the end of the day. It's an unenviable position they're in – to make quick decisions that are sometimes deadly and often second-guessed.

We traveled to one facility outside Atlanta to see first-hand the training that can better prepare officers for those high-pressure situations.

At The Georgia Public Training Center, officers use a simulator that's about as real as it gets. Made by InVeris, the simulator puts trainees into a 300-degree video environment of a crime taking place.

"The simulation can actually have people walk up behind you, beside you, have multiple people inside the scenario.  And by using this type of system it puts the officer that's in training or an advanced officer into types of situations that we can't recreate in real life without somebody getting hurt or injured," explained Chris Wigginton, the director of the training center.

This facility has been training officers across Georgia in crucial decision-making since the 1980s.

"We required every officer in the state to receive additional use of force training and de-escalation training before any other on a national level before any other state was doing this," Wigginton said. "We talk about it in a lecture-based environment. We test them academically on a written test," he added

After that, they're put through the high-tech simulation, where an instructor controls each moment of the scenario and can change what happens next with the click of a button. This is where costly mistakes are revealed before they happen in real life.

I asked Wigginton about statistics that indicate blacks are more likely to be killed by law enforcement than others.

"I just do not believe that law enforcement sets out to murder people of color," Wigginton said. "When you talk to officers that are involved in use-of-force cases, black, white, Asian, Hispanic – it doesn't matter – every one of them will tell you the same thing. That when that situation started to escalate, color or creed had nothing to do with the decisions they made. It was all about survival and staying alive."

We talked specifically about three high-profile cases in 2020 and asked Wigginton his take on each.

First, we asked about the case that electrified the nation, the killing of George Floyd.

"What happened there was not justified and I think it was very shocking to not only the law enforcement community but to the nation," Wigginton said.

Then there was Breonna Taylor, an innocent woman shot to death when Louisville police stormed her home searching for illegal contraband. Her boyfriend shot at the police, thinking they were robbers breaking in. Officers returned fire, and one of their bullets killed Taylor.

"When those officers went through the threshold of that door, if they start receiving fire, they're justified in returning fire.  And I asked somebody the other day, how many rounds should an officer take before they feel the need to shoot back?" Wigginton said.

Then there is the case of Rayshard Brooks, shot to death not too far away from The Georgia Public Training Center, by Atlanta Police after a tussle where Brooks grabbed one of the officers' tasers and ran.

"In that incident, the use of force up to deadly force was justified in the way officers applied that," said Wigginton.

He also told us the center requires racial sensitivity and diversity training, but some things are out of officers' control.

"People want to look at it and say, 'well, an officer's had de-escalation training. Why did this incident end up in a deadly force encounter?' Well, sometimes that's not the officer's decision. We always leave out the other part of that conversation and that's the citizen that's involved in that encounter. The officer cannot control what that citizen does."

He says the training here is designed to prevent as many deaths as possible, which he believes is the goal of the vast majority of officers on the streets.

Law enforcement officials say it's important to remember the emotional toll officers suffer when they shoot and kill someone. They must live with that for the rest of their lives. That's where a different kind of training or therapy comes in. Even then, some can't recover and are forced to give up their careers.