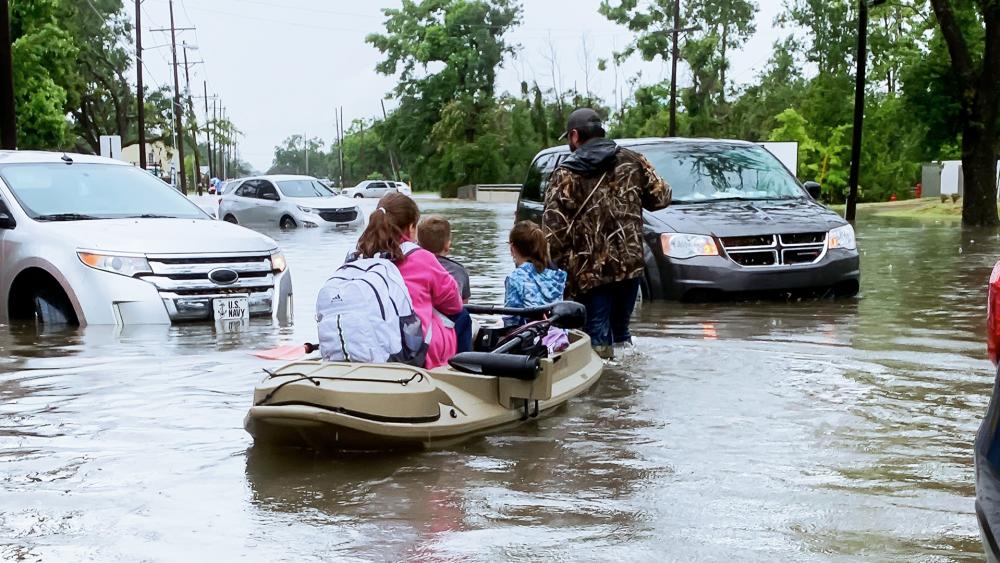 Parents use boats to pick up students from schools after nearly a foot of rain fell in Lake Charles, La., Monday, May 17, 2021. (Rick Hickman/American Press via AP)

Louisiana is in a state of emergency after severe weather ravaged areas with torrential rain, flooding, and tornadoes.

"The flash flooding throughout Lake Charles and Southwest Louisiana is dangerous and potentially life-threatening," Edwards wrote in a Facebook post. "The Governor's Office of Homeland Security and Emergency Preparedness is in contact with local leaders about their needs."

Southwest Louisiana is currently experiencing a major flash flooding event. Please pray for Lake Charles and check on your friends and neighbors in the area. #lagov #lalege pic.twitter.com/DOnXSOZWXv

Major flooding is occurring in Lake Charles as strong storms continue to move through. There are reports of multiple people trapped. pic.twitter.com/4ni0LkjRcG

Rescuers in boats have been pulling people from their homes and some parents picked their kids up from school in kayaks because the roads were impassable.

Gov. Edwards asked residents to join him in "praying for the families in Lake Charles who have seen so much loss already." An outpouring of prayers were shared on the governor's Facebook page.

Cathy Coats wrote, "Father, we pray for their safety and that You will open doors for Lake Charles and the areas that have been affected by the Storms!"

Cynthia Balthazar asked God to "Hear Our Prayers! Have Mercy on Lake Charles, my birthplace and all who are in need! Thank You Father."

Seth Whitney wrote, "Praying For Louisiana and Texas!! I love rain but flooding is a big no no! God Is Still In Control."

A family in North Dallas believes a tornado touched down near their home after the roof was ripped off.

JUST IN: looks like a possible tornado may have touched down in North Dallas.

This home's roof is ripped off and there's insulation up in the power lines behind the home.

So far, it's the only major damage in the area that we've seen. (@wfaa) pic.twitter.com/PKe9bCQBCG

Severe weather is expected to continue through Thursday as more storms are anticipated across the south-central U.S.

The National Weather Service is urging people to prepare for rounds of intense rain, strong thunderstorms, and more flooding.

Multiple rounds of heavy rain are forecast across a large portion of central and eastern TX, southern OK and LA through Thursday morning. Numerous flash flooding events are possible, some of which may be significant. For more information, please visit https://t.co/QoghhWuzWz. pic.twitter.com/gv4ou7OrIO