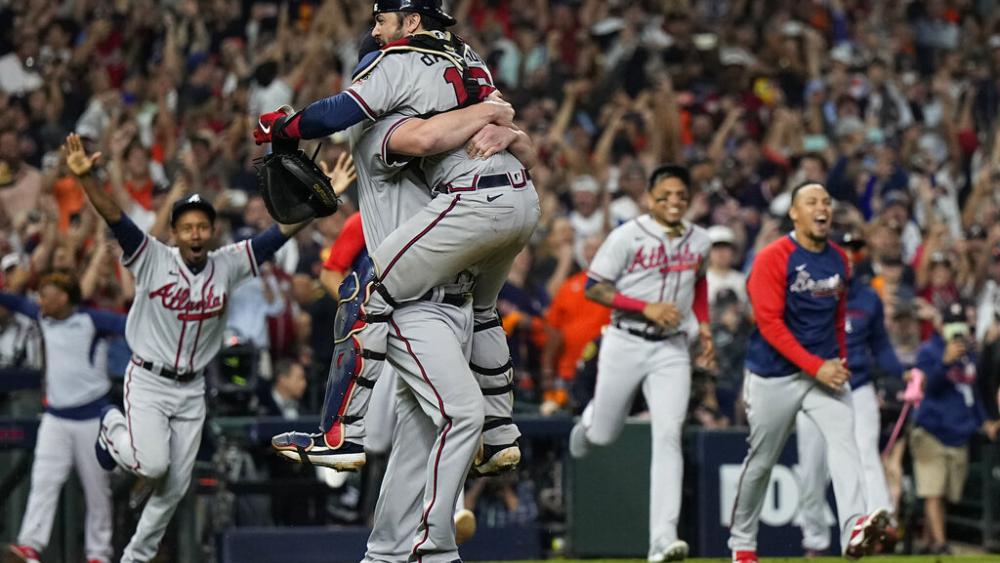 HOUSTON (AP) — Most of the season, it just seemed this wasn’t their year.

They dropped their first four games, and soon injuries piled up. They lost their most dynamic player before the All-Star break. They were stuck below .500 in August.

Yet out of nowhere, suddenly, these Atlanta Braves transformed themselves and took off.

Jorge Soler, Freddie Freeman and the Braves breezed to their first World Series championship since 1995, hammering the Houston Astros 7-0 on Tuesday night in Game 6. Max Fried threw six dominant innings in a signature pitching performance to close it out.

"We hit every pothole, every bump you could possibly hit this year," Freeman said. “Injuries, every single kind of thing that could happen, that could go wrong went wrong, and we overcame every single one of those things.”

How proud Hank Aaron would've been.

Even so, Atlanta's troubles never fully went away.

General manager Alex Anthopoulos, the architect of the Braves' midseason turnaround, missed this crowning achievement after testing positive for COVID-19. He was back home for the clincher.

Soler, a July acquisition who tested positive for the coronavirus in the playoffs, backed Fried early with a monster three-run shot for his third homer against the Astros.

Freeman hit an RBI double and then punctuated the romp with a solo home run in the seventh that made it 7-0.

By then, it was a total team effort. Ailing star Ronald Acuña Jr., the dynamo of Atlanta’s future, bounded from the dugout to join the celebration for Freeman, the longtime face of the franchise.

When Yuli Gurriel grounded out to end it, Freeman caught the throw at first base, put the ball in his pocket, and the party was on for manager Brian Snitker's club.

A full hour after the game, hundreds of Braves fans packed behind the team's third base dugout kept doing the chop and chant, causing loud echoes to bounce around the ballpark.

About 700 miles away at suburban Truist Park, thousands of fans poured into the Braves' home to holler.

A mere afterthought in the summer heat among the land of the Giants, White Sox and Dodgers, but magnificent in the Fall Classic.

“This is the toughest team I’ve ever been a part of," said shortstop Dansby Swanson, who also homered.