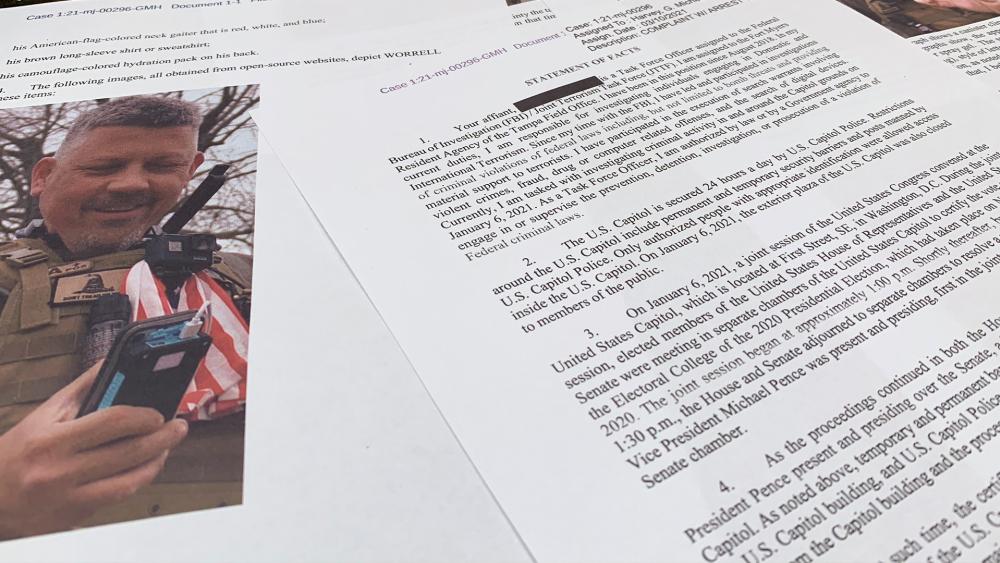 This photo shows part of the Justice Department's statement of facts in the complaint and arrest warrant for Christopher Worrell. (AP Photo/Jon Elswick)

In a case involving a Jan. 6 Capitol riot defendant with a broken wrist, a federal judge held the District of Columbia's corrections director and jail warden in contempt of court Wednesday. And he's asking the Justice Department to investigate whether the civil rights of other inmates arrested in the riot are being abused.

U.S. District Judge Royce Lamberth had summoned the jail officials as part of the criminal case into Christopher Worrell, a member of the Proud Boys who has been charged in the Jan. 6 riot. He has been accused of attacking police officers with pepper spray gel.

Lamberth made his ruling after finding out that jail officials failed to turn over information needed to approve surgery recommended four months ago for Worrell's broken wrist, according to The Washington Post.

Worrell still hasn't undergone the surgery to fix his wrist.

After the judge learned last week that the surgery still hadn't happened, he ordered the jail system to turn over notes to the U.S. Marshals Service so they could approve the medical procedure.

But on Tuesday, the jail still hadn't sent the records so the judge ordered Quincy Booth, the director of the city's Department of Corrections, and Wanda Patten, the warden of the DC Jail, to be held in contempt of court.

"He's needed an operation. He hasn't gotten it," the judge said.

While Lamberth did not impose any sanctions or penalties, the judge said he was referring the matter to the Justice Department to investigate whether the civil rights of other inmates in the jail are being violated.

He said in the hearing that the failure of D.C. officials to turn over medical records is "more than just inept and bureaucratic jostling of papers, raising the possibility of deliberate mistreatment," according to the Post.

The D.C. jail has also been accused of punishing Jan. 6 rioters with solitary confinement.

As CBN News reported, supporters of the people arrested in the Jan. 6 riots held a rally on Sept. 18 to bring attention to what they said were the disturbing treatment of the suspects while in federal custody.

A federal law known as the Civil Rights of Institutionalized Persons Act – commonly called CRIPA – allows prosecutors to review conditions of jails, prisons and other government-run facilities to identify if there is a systemic pattern of abuse or civil rights violations.

A spokesperson for the Department of Corrections did not respond to a message from the AP seeking comment on Wednesday.

Journalist Glenn Greenwald tweeted condemnation for the poor treatment of Jan. 6 rioters. "Conditions in many US prisons have been atrocious for a long time, but the 1/6 defendants in prison – none of whom have yet been convicted – have been subjected to extra harsh measures. Today a federal judge called on a DOJ investigation," he said.

"Meanwhile, critics of excessive SWAT raids in general told POLITICO that it's reasonable for law enforcement to use them in Jan. 6 cases. Add to that support for long pre-trial imprisonment and prison terms for trivial misdemeanor charges, and you see the authoritarianism," Greenwald added.

Conditions in many US prisons have been atrocious for a long time, but the 1/6 defendants in prison -- none of whom have yet been convicted -- have been subjected to extra harsh measures. Today a federal judge called on a DOJ investigation:https://t.co/6kEScjxgGT

Another concern noted by the Post is how long judges will allow prosecutors to continue to ask defendants to waive their rights to a speedy trial nine months after the Capitol riot.

Three months ago, U.S. Rep. Lauren Boebert (R-CO) and 10 other members of Congress sent a letter to Attorney General Merrick Garland demanding an explanation for the apparent inconsistent application of the law with respect to the Jan. 6 rioters when compared with BLM rioters.

The letter was in response to reports that the Jan. 6 rioters were being held in solitary confinement, while at the same time, BLM rioters who attacked federal buildings and law enforcement officers were let go after a few hours of community service.

"The Department of Justice is using aggressive tactics to prosecute the January 6th riot, but it has not done the same for the BLM riots during the spring and summer of 2020 where one federal officer was killed and over 700 federal and local officers were injured," the July 20, 2021 letter read.