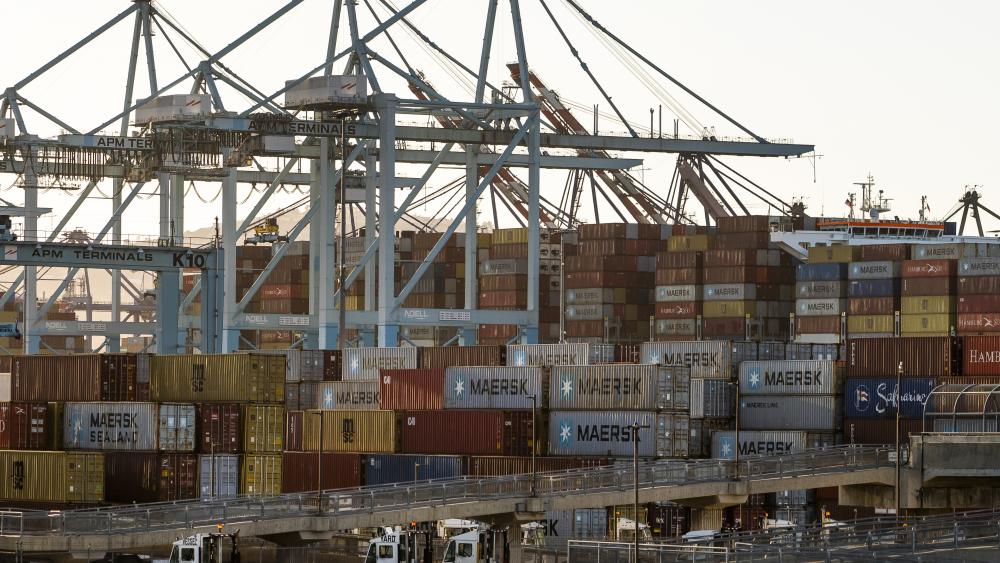 In this Tuesday, Oct. 19, 2021, photo shipping containers are stacked up at Maersk APM Terminals Pacific at the Port of Los Angeles. (AP Photo/Damian Dovarganes)
6278891441001
US Ports Scramble to Relieve Supply Chain Bottlenecks as Inflation Soars

Ongoing standstills at the nation’s largest port are driving prices through the roof. Others are stepping up to help, but it’s not enough to fix the problem.

The Port of Virginia is already soaking up some of the congestion that’s plaguing the West Coast. They're operating very efficiently and hope to keep the cargo and turn it into long-term business.

“If you take your car and run it at 100 miles every day, that car is going to show wear and tear. The industry is being run every day at 100 miles an hour,” said Joe Harris, spokesman for the Port of Virginia.

As many as 73 container ships have been waiting to unload goods at the ports of Long Beach and Los Angeles this week – the largest ports in the nation, now a chokehold to the global supply chain.

“The warehouses are full,” said Harris. “The truck capacity is being soaked up because there's so much cargo that needs to be moved…And the ships keep coming.”

L.A.-Long Beach processes about 10-million shipping containers each year. In comparison, all the major ports on the East Coast process just above 8 million.

With roughly 250,000 containers sitting idle on the West Coast, the president plans to call on the U.S. military for help with fixing the supply chain woes.

Supply chain bottlenecks are driving inflation across America. Store shelves are bare and many have likely felt the impact in their wallet.

"Inflation takes its worst toll on those who are on the lowest ladder of income and wealth. Poor people. For those who are well to do, it's not an issue – but for the middle class and those in lower class income – that's where the toll is taken and it's like they can't get a break,” said Mark Hamerick, Senior Economic Analyst for Bankrate.com.

Inflation is up more than 5% this year. The typical American household is now spending an extra $175  more each month on housing, groceries and gas. And it could be the new normal for months.

“On a 12-month basis the inflation rate will remain high into next year because of what has already happened. I expect improvement by the end – by the end of middle to next year. Second Half- of 2022,” said Treasury Secretary Janet Yellen.

Major companies are charging more because of rising costs, like Nestle, Unilever, and Proctor and Gamble.

The U.S. Postal Service and other shipping companies have added new facilities, machines and seasonal workers in an attempt to avoid the brunt of bottlenecks come Christmas.

The strain in the supply chain will endure well past COVID-19 and well into 2022. Harris says they just hope they can contain the workload they've already taken on to help alleviate the problems in the West Coast.