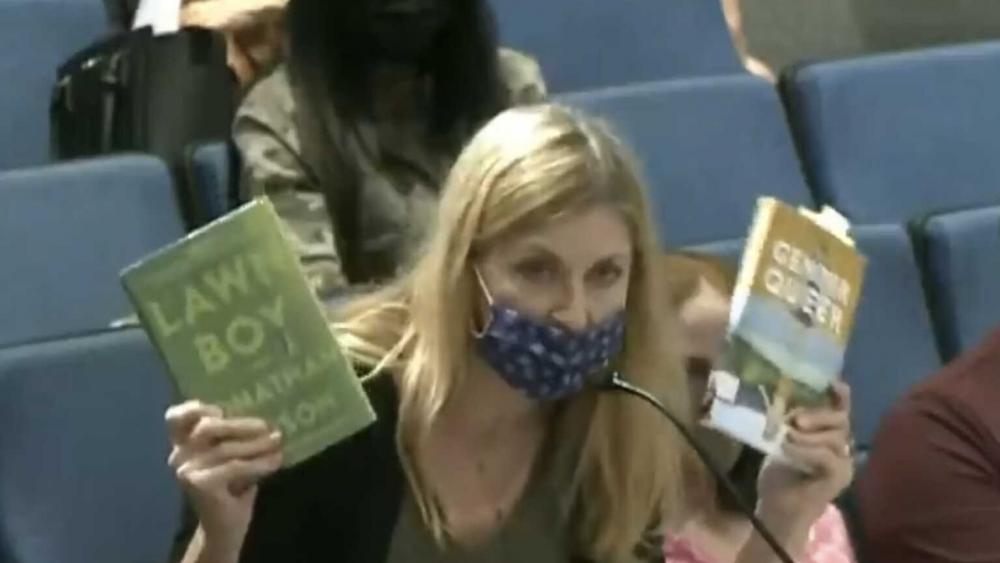 A mother in northern Virginia unloaded on her city’s school board Thursday after discovering what she described as books filled with “pedophilia” on the shelves.

When she left a local high school library, Stacey Langton had two books: “Lawn Boy” by Jonathan Evison and “Gender Queer: A Memoir” by Maia Kobabe. She told the board of Fairfax County Public Schools that, in each book, she found references that “include pedophilia, sex between men and boys” with entries chronicling — in explicit detail — sexual encounters between underage boys and adult males.

“Pornography is offensive to all people,” said Langton after she was interrupted by school board members chiding her for reading highly explicit sentences from the two books. “It is offensive to common decency.”

As her time drew to a close, board members told Langton she needed to censor herself because “there are children in the audience here.”

“Do not interrupt my time!” she replied. “I will stand here until my time is restored and my time is finished. These books are in stock and available in the libraries of Robinson, Langley, and Annandale High Schools.”

Earlier in her comments, the protective mother asserted the books’ placement in the high school libraries was “not an oversight” but was intentional.

Langton explained she decided to check the library to which her child has access after hearing about a Texas mother who rebuked board members in the Lake Travis Independent School District in Austin for allowing similarly explicit books in its middle school library.

In response, the Lake Travis ISD pulled the book and plans to review it, KXAN-TV reported.

Karl Frisch, the first openly LGBTQ person elected to a local office in Fairfax, made fun of Langton, describing her comments as “exorcisms.”

It's not every week the School Board receives two exorcisms during public comment. To be clear, nothing will disrupt our Board's commitment to LGBTQIA+ students, families, and staff. Nothing.