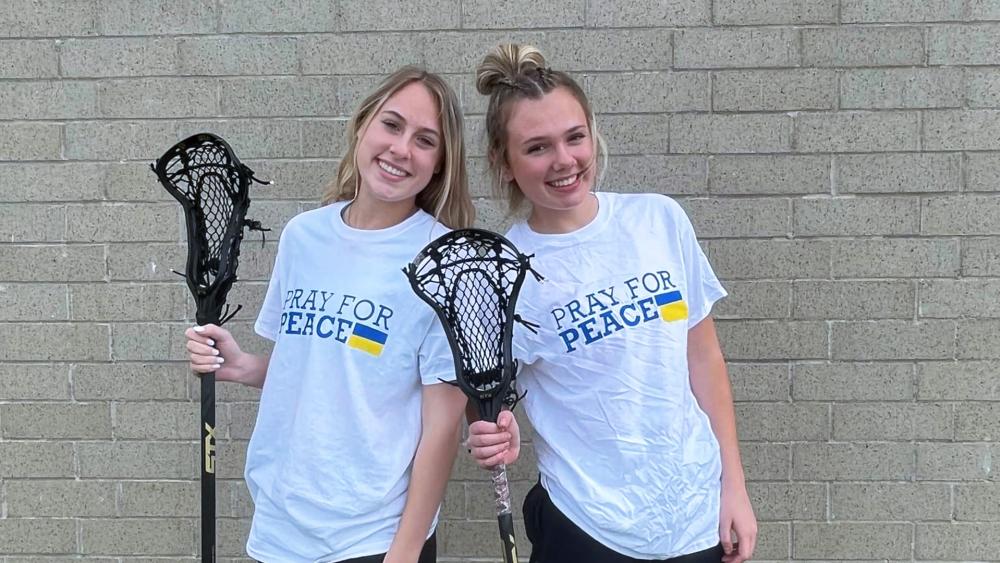 Image Credit: Clare Levison/Permission to Use

The ongoing crisis in Ukraine has prompted people from all over the world to show their support for the refugees and those who are still under fire in the country.

But when a group of high school lacrosse players in Virginia wanted to display "Pray for Peace" on their warm-up shirts, they were denied the right by school officials. They were told that the positive message could be interpreted as "religious and political in nature."

Levison wrote that the team considered it a kind gesture to promote peace by wearing the shirt; however, the Montgomery County Public Schools (MCPS) thought otherwise.

"Pray for Peace is neither a religious nor political statement," she wrote. "It is a universally accepted sentiment."

Levison even cited that U.S. presidents have called on the nation to pray for peace during particular occasions.

"Pray for Peace is not a religious statement that requires separation of church and state. It is one that all Presidents in power, regardless of political party, reference on a regular basis," Levison shared.

When the attempt was denied, she asked school administrators if the saying could be changed to "Play for Peace," but that was also shot down.

"I, like many of you, thought the primary objection to these t-shirts by Montgomery County Public Schools was the use of the word Pray," she wrote. "Because the goal of the shirts was to promote Peace, regardless of religious or political affiliation, I asked if the shirts could be worn if they were revised to say Play for Peace."

She mentioned that the Blacksburg High School principal addressed the matter with district officials, but the message was still unsupported.

"Approval was denied based on the following reason: 'As a school division, we have a policy that requires school employees and events to remain neutral on political issues. This policy applies to any sports teams as well since our student-athletes are representing the school while competing on the field.'"

Several school board members told Roanoke-based WSLS News that they disagree with the position taken by MCPS.

"But the 'play for peace' ... I was kind of surprised, that I even mentioned that would be an acceptable compromise," said Susan Kass.

Member Mark Cherbaka noted, "I feel like we are at a point where everything could be political, I just don't want to get to a point where we are shutting down every single thing."

According to The Roanoke Times, Interim Superintendent Annie Whitaker asked, "What is the peace from? A war. And a war is rooted in what? It's a political war, from people who have differing views."

Whitaker added that the focus of athletes should be on playing the sport.

"There isn't really a reason within a sports team to be wearing school-issued uniforms that are promoting anything other than the sport," she said. "The purpose of that sport is to play that sport."

Levison shared that the "Pray for Peace" shirts can now be purchased through an online store.

All proceeds from the shirts will go to Friends of Ukraine, the organization that the girl's lacrosse coach worked with when she volunteered at orphanages in Ukraine.

CBN News reached out to the school district, and Brenda Drake, director of Communications and Community Relations for MCPS, emailed a joint statement from Board Chair Sue Kass and Interim Superintendent Whitaker saying:

"The concerns about the warmups are not related to student speech as the team members did not initiate the discussion or purchase the shirts. The role of the School Board is to implement our policies in an unbiased way. Staff-led activism is a topic our Board has been discussing throughout the year, including flags, posters, and clothing that show support for specific groups or issues. It is not permissible for school-issued, staff-sponsored apparel to promote specific causes, groups, or beliefs."