6-Year-Old Run Over by Bulldozer, Mother Chronicles His Miraculous Recovery: 'God Is Good All the Time' 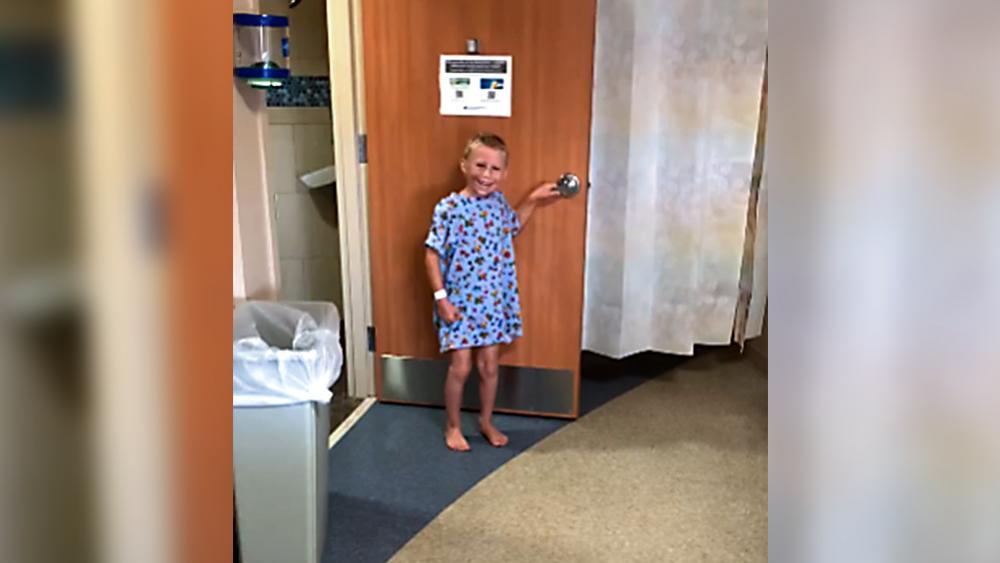 A little more than one week after being run over by an 18,000-pound bulldozer, a 6-year-old Texas boy is home from the hospital, and his mother is calling his remarkable recovery "a miracle."

On July 27, Bodie Boring was on a job site with his father when the accident occurred, according to KBTX-TV.

Bodie was hospitalized with numerous injuries, including fractures in his pelvic bone, two bruised lungs, a skull fracture, a blood clot in his brain, and a brain bleed," his mother Samantha Boring told the outlet. In addition, he was later diagnosed with COVID-19.

Samantha chronicled Bodie's recovery on her Facebook page, sharing photos and videos of his amazing recovery. She also thanked everyone who prayed for their little boy.

One day after the accident, his mother wrote in a post, "Bodie told me 'Mommy I knew when I saw that blade about to hit me that I was gonna die.' Honestly, I screamed all the way to Temple begging God not to take my baby, to the point where I had a seizure from the panic.  I held onto my little brother both of us crying saying; He's gotta be ok, there's no other option, he's got to be ok.'"

Samantha also pointed out to her followers that if they didn't believe in God, her son's survival is proof of His existence.

"Folks, I'm gonna tell you one thing... If you don't believe in God, Bodie is proof right here. I know for a fact God had a hand in saving my baby. There is no other explanation as to why I'm not leaving this hospital without my baby other then God!! I'm still in shock. God is good all the time," she wrote.

People from all over the country responded by sending donations, writing encouraging messages, and telling the family they were praying for Bodie.

Then on July 31, Samantha posted a video showing Bodie walking down the hospital hallway using a walker -- just four days after his accident.

"You may be tough but you aren't walking 5 days after getting ran over by an 18,000 lb Bull Dozer tough. God is Good all the Time  #Bodietough #BodieStrong," she wrote.

"He has amazed me so much," Samantha told KBTX. "His spirit has been so positive this whole time. Even in his worse pain, he's just been amazing. This is a miracle, and there's only one explanation as to why he's still here and I truly believe that that's God."

On Aug. 4, Samantha posted a video of Bodie walking to his hospital bed unassisted. "#bodietough," she wrote.

The same day, she also posted that her little boy was going home the next day.

"Although it is scary with him still having the blood clot they said they will still monitor him closely with frequent follow ups & imaging so that gives me a little comfort," she wrote.

Then on Friday, Samantha posted a photo of a smiling Bodie standing with his walker.

Meanwhile, Bodie's cousin, Magen Boring, started a GoFundMe page to help with Bodie's medical expenses. As of Aug. 8, the campaign has raised $51,390 toward a goal of $60,000.

"Above all, please continue lifting them up in prayer!!" Magen wrote on the GoFundMe page.

Magen told KBTX her family has greatly appreciated all of the support, hearing from people all over the country. She said it's also lifted Bodie's spirits as he continues to recover.

"He's just also been really amazed to see everybody who cares about him and how many people are praying for him," Magen said. "There are people in other states that this story has reached, and they've even said 'we've heard about this and we're praying' and so that's just been phenomenal."

CBN News has reached out to Samantha Boring for an update on Bodie. We'll post her response here when we hear back.