'God Has Big Plans for Her': Teenage Girl Survived Shark Attack After Brother Risked His Life to Save Her 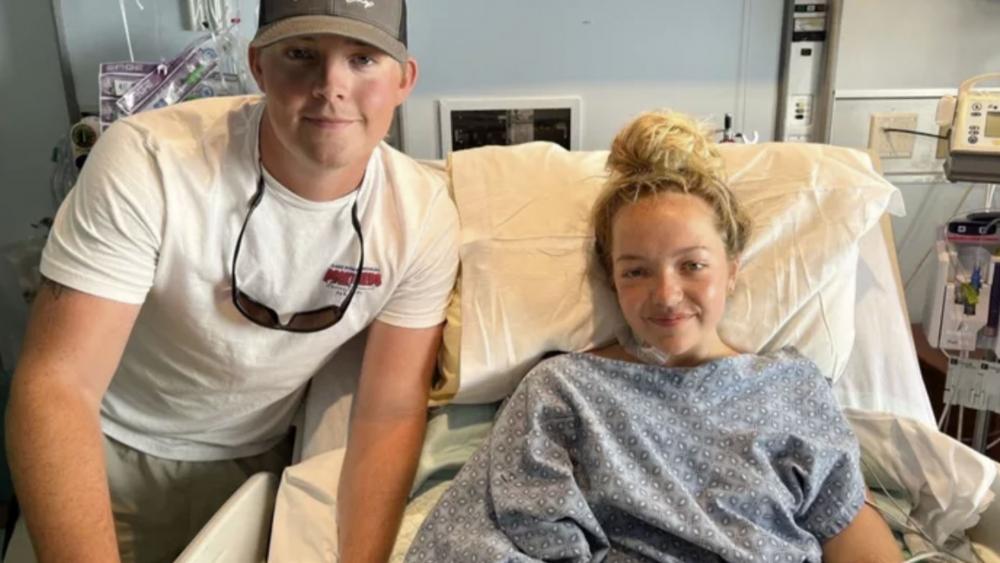 Seventeen-year-old Addison Bethea survived a shark attack off Keaton Beach, Florida in late June due to what she says were the heroic efforts of her brother Rhett Willingham.

The teenager was searching for scallops when a nine-foot shark attacked her. Willingham, a firefighter and an EMT in Taylor County, was swimming beside his sister when he heard her scream for help.

Addison told CNN she knew to punch the shark in the nose in an effort to make it let go.

"I couldn't get around to punch it in the nose," she explained. "So then I just started socking it in the face. And then I poked its eyes. And then I tried to latch it off of my with my fingers and then it bit my hand."

"And then I screamed for help and my brother came and saved me," Addison said.

Rhett was able to get his sister away from the shark which had repeatedly attacked her.

A man on a boat had noticed the commotion and steered toward the pair. He helped Rhett get the teenager aboard the boat and helped apply a tourniquet to her leg to stop the bleeding.

Addison's injuries to her upper right leg were serious, including the loss of her quadriceps, the four muscles in the front of the thigh that work together to keep the kneecap stable and allow for lower leg extension. The bite also caused massive nerve and vascular damage.

Doctors later successfully amputated the girl's leg just above the right knee. They used the muscle and tissue from her lower leg to reconstruct her upper leg. She will have the ability to use a prosthesis for her lower leg.

Addison is doing well following her surgery. Her road to recovery has been documented on the Facebook page Fight Like Addison.

The teen went home from the hospital on July 19. Addison's positive attitude and her sense of humor have been credited for helping her get through the incident.

WCTV reports the community continues to support the 17-year-old through special events which will benefit a foundation created for the Bethea family.

"It's great having people support you the whole time because, without that support, you really couldn't get through it by yourself, you'd get down in the dumps, and who's going to lift your spirits when you're down," Addison told the station.

On Saturday, Rhett and Addison both received awards at a bike rally and concert event held in Perry, Florida.

Taylor County Sheriff Wayne Padgett presented Rhett with a Life-Saving Award for his actions. Addison was given a Local Hero Award for setting an example for the strength she has shown following her shark attack.

On Addison's GoFundMe page, her mother Michelle Murphy wrote, "God was good, he let our baby girl live when the odds were against her. We've told her several times since that day that we will take a lost leg over a lost child any day. We also know that God let her live for a reason. She has purpose and so do we."

"I'm grateful to God that he let our little girl live. I'm grateful to God that she has a brother that loves her so much he risked his own life to save her. Addison is here for a reason. God has big plans for her and we are going to continue to help her find her way in this new life she's been given. It's not always going to be easy but she's going to figure it out and she's going to be strong and overcome any obstacles and show the world why she's here," Murphy continued.