Biden Has Vowed to Pick a Black Woman to Replace Breyer: Here's a List of Top Candidates 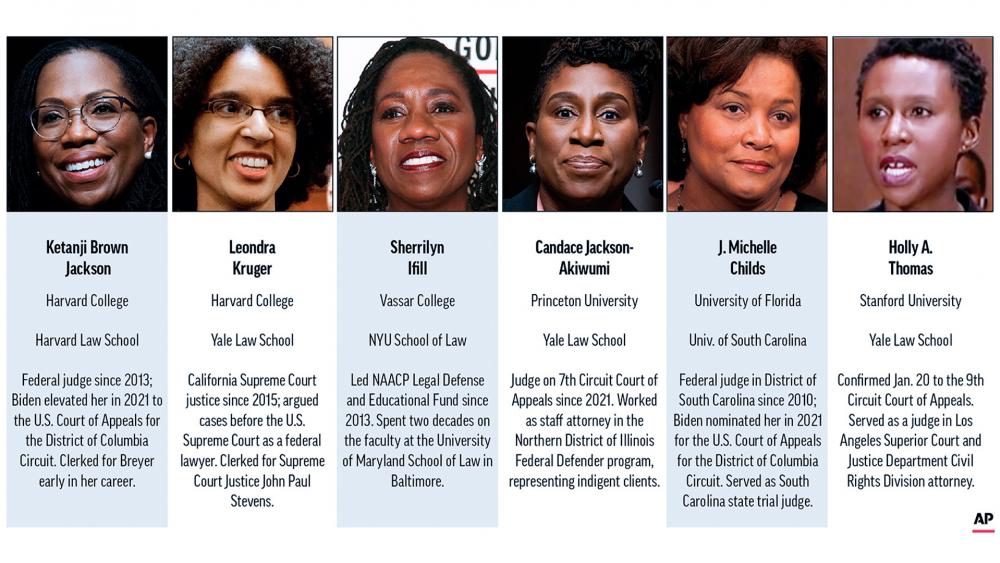 Biden's potential picks for the Supreme Court (AP graphic)
6293972406001
Biden Has Vowed to Pick a Black Woman to Replace Breyer: Here's a List of Top Candidates

Justice Stephen Breyer and President Joe Biden are expected to announce his retirement at the White House today, paving the way for the president to keep his pledge to nominate the court's first African American woman.

"The president has stated and reiterated his commitment to nominating a Black woman to the Supreme Court and certainly stands by that," White House Press Secretary Jen Psaki told reporters Wednesday.

Said to top the list of potential picks is Ketanji Brown Jackson, who got three Republican votes, including South Carolina's Lindsey Graham, when the Senate confirmed her to the D.C. Circuit Court of Appeals last June.

Also on the shortlist is Leondra Kruger, of the California Supreme Court, J. Michelle Childs, who serves on South Carolina's federal court and Judge Leslie Abrams Gardner, of the U.S. District Court of Georgia.

Justice Breyer's departure won't shift the court's 6-3 conservative majority, but does come at a critical time for Democrats who've been pushing for the 83-year-old senior justice to retire.

"It comes at a time when the Democrats have the slimmest, the slimmest control of the Senate, where a new justice would have to be confirmed," said Mark Sherman, the Associated Press' Supreme Court reporter. "And that's also just in advance of midterm elections, where that majority is very much in question."

Breyer was considered by the media to be a centrist during his 27 years on the bench, but he consistently voted with the liberal wing of the court.

One of Breyer's most important cases was in 2000 when the wrote the majority opinion striking down a Nebraska law outlawing partial-birth abortion.

"And if you start to read some of the press releases that are coming in from many of these liberal groups, you'll get a sense of his legacy: The Human Rights Campaign, pro-LGBT group, calling him a wonderful hero of the movement," said David Brody, CBN News' chief political analyst. "You just go down the list, Planned Parenthood, the ACLU, all with very kind words."

Top Senate Democrats say they'll move quickly to confirm Biden's nominee even if Breyer does not officially step down until the summer.

And despite a 50-50 split in the upper chamber, most experts aren't expecting a rancorous fight.