'From Beginning to End, a Blessing from God': Tuskegee Airman Charles McGee Dies After 102 Years of Making History 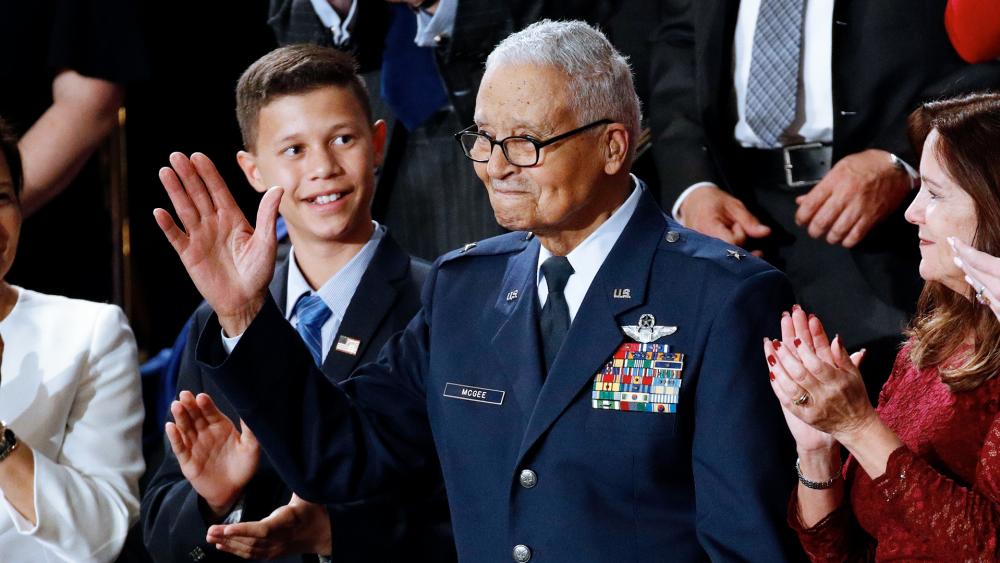 Tuskegee Airman Charles McGee and his great grandson Iain Lanphier react as President Donald Trump recognizes McGee during the State of the Union address to a joint session of Congress on Capitol Hill on Feb. 4, 2020. (AP Photo/Patrick Semansky, File)

McGee passed away in his sleep at his home in Bethesda, Maryland, his son Ron McGee said.

A family statement had described him as "a living legend known for his kind-hearted and humble nature, who saw positivity at every turn."

After the U.S. entered World War II, McGee left the University of Illinois to join an experimental program for Black soldiers seeking to train as pilots after the Army Air Corps was forced to admit African Americans. In October of 1942, he was sent to the Tuskegee Army Air Field in Alabama for flight training, according to his biography on the website of the National Aviation Hall of Fame.

"You could say that one of the things we were fighting for was equality," he told The Associated Press in a 1995 interview. "Equality of opportunity. We knew we had the same skills, or better."

McGee graduated from flight school in June 1943, and in early 1944 joined the all-Black 332nd Fighter Group, known as the "Red Tails." He flew 136 missions as the group escorted Allied bombers in missions against the Nazis in Europe.

McGee remained in the Army Air Corps, which after the war became the U.S. Air Force. He served for 30 years. He flew low-level bombing and strafing missions during the Korean War and returned to combat again during the Vietnam War.

He retired as a colonel in the U.S. Air Force in 1973, then earned a college degree in business administration and worked as a business executive. He was accorded an honorary commission promoting him to the one-star rank of brigadier general as he turned 100. Another event marked his centennial year: He flew a private jet between Frederick, Maryland, and Dover Air Force Base in Delaware.

In 2020, McGee drew a standing ovation from members of Congress when he was honored by President Donald Trump during his State of the Union address.

But another thing also stood out about McGee – his Christian faith. He was the son of a preacher who served in the African Methodist Episcopal Church, and the Tuskegee Airman also served in his local church as an elder and choir member throughout his life.

"McGee received a lot of honors during his distinguished career, and I appreciate what he said after accepting a doctorate degree a couple years ago: 'This honor is certainly another blessing from God. It seems to me as I look back at my 100 years, 100-plus, it's a blessing from God…It is also, I hope, a chance for those coming behind to see that life can be rewarding. And mine certainly has been, from beginning to end, a blessing from God'."

McGee, a longtime member of the Christian Church (Disciples of Christ), once said, "The key to me is, again, a God-given life, to be an example for the young people who are the country's future, not only in our family but in our community and our service."

His daughter Charlene McGee Smith wrote a 1999 biography about him, Tuskegee Airman, where he's quoted as saying, "We shattered all the myths. A lot of what we fought for was an opportunity to overcome having someone look at you and, because of your color, close a door on you."

In an essay for the Smithsonian National Air and Space Museum, he wrote that he was often asked why the Tuskegee Airmen were so successful in combat.

"I would say it was because of our courage and perseverance," he wrote. "We dreamed of being pilots as boys but were told it was not possible. Through faith and determination we overcame enormous obstacles. This is a lesson that all young people need to hear."

"I am most proud of my work as a Tuskegee Airman that helped bring down racial barriers and defeat the Nazis," he added.

Watch the ceremony for the Brig. Gen. Charles E. McGee House at Columbia College below: