'She Is a Walking Miracle': Shocked Witness Stunned Driver Survived Wreckage That Left Car 'Crumpled Like a Piece of Paper' 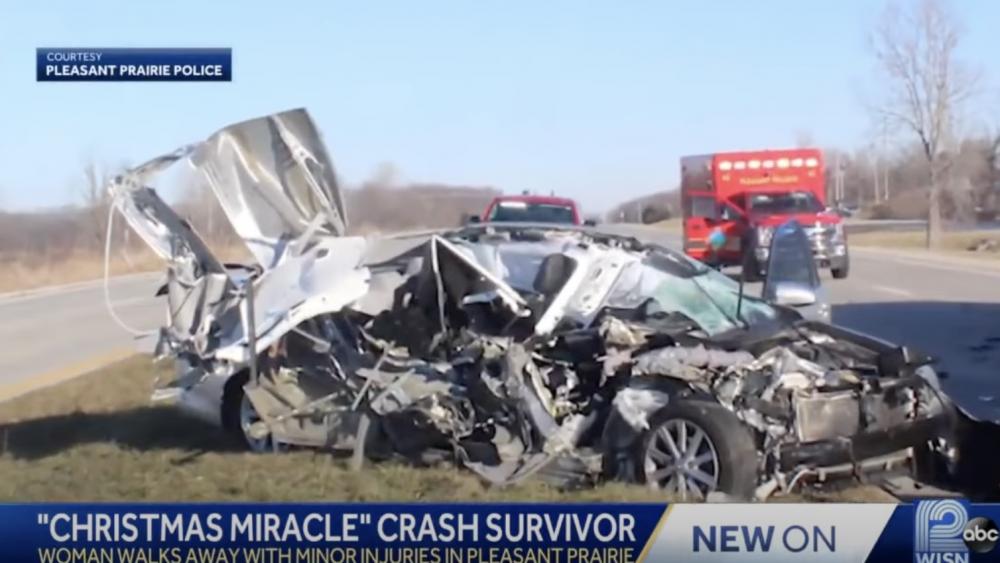 Some are calling an Illinois woman a “walking miracle” after she survived a serious car accident leaving her vehicle looking “crumpled like a piece of paper.”

Marguerite Phillips told WISN-TV she was driving to work last Wednesday in Wisconsin when she saw the wreckage and was stunned to see the driver — who had collided with a semi-truck — survived with only minor injuries.

Phillips pulled over to help keep the 47-year-old woman calm, to help her call her husband, and to pray with her.

“At first I was looking like, ‘What is that? What is going on,'” she said. “At that moment, of course, she was in shock, but my main thing was making sure she was OK and keeping her calm.”

The victim’s car was virtually destroyed, with the roof peeled off and the sides mostly obliterated. The only part of the car that was intact was the driver’s side, something that likely saved the woman’s life.

Phillips said she was also “in shock” to see the woman only have minor scrapes and bruises, especially considering the state of the car.

“I was just in shock. Everyone was shocked, as well and the first responders and all,” Phillips told WISN-TV. “[Her car] looked like a piece of paper that was balled up. Literally, it was a miracle. She is a walking miracle.”

Another witness, a neighbor named Sharon Campbell, told the outlet she called 911 when she saw the accident was blocking traffic. She, too, said the woman’s survival is “a miracle.”

“We were just thankful,” she said. “It is truly a miracle that she walked away.”

Pleasant Prairie Police Department Sgt. Chad Brown said authorities are still looking for the cause of the accident.

“There’s indication the semi was not traveling any more than 10 miles per hour. We’re still trying to figure out why,” Brown told Kenosha News. “You can label this a holiday miracle. Every part of that vehicle was wrecked except where she was sitting.”

The victim was cited for failure to maintain control of her vehicle.