Gov. 'Asking Everybody to Pray' as 25 Dead, Cities Reeling from 'Most Devastating Floods in Kentucky's History' 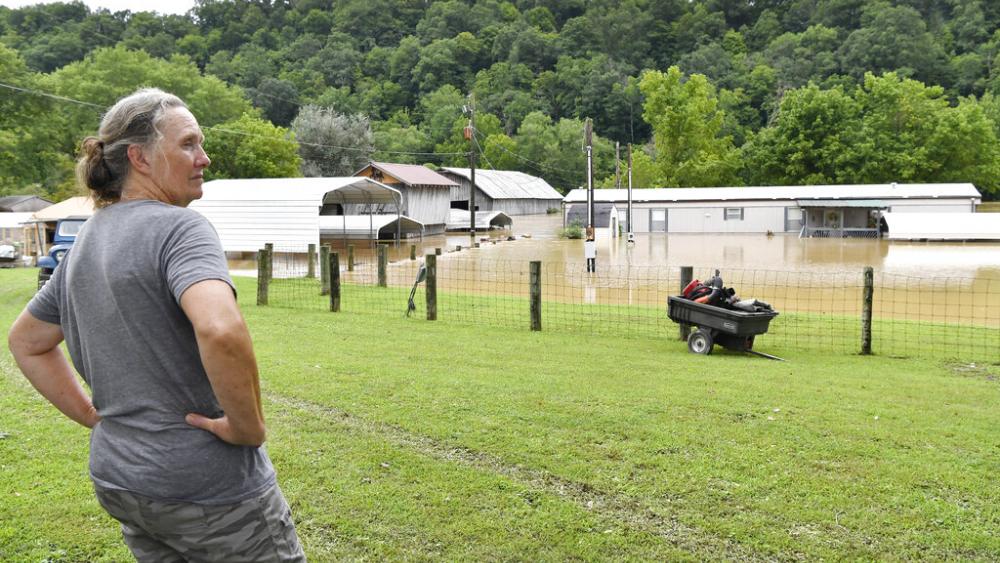 Bonnie Combs stands by and watches her property become covered by the North Fork of the Kentucky River in Jackson, Ky., Thursday, July 28, 2022. (AP Photo/Timothy D. Easley)
6310185146112
Gov. 'Asking Everybody to Pray' as 15 Dead, Cities Reeling from 'Most Devastating Floods in Kentucky's History'

Widespread flooding nationwide has many people praying for a miracle – flooding so fierce that thousands have been forced to flee for higher ground.

Historic, torrential rains in Kentucky have washed homes away from their foundations, and more rain is in Friday's forecast. Gov. Andy Beshear (D-KY) called on the National Guard to assist with rescue operations. He issued a state of emergency, requesting financial resources to help Kentucky residents.

"We are currently experiencing one of the worst and most devastating flooding events in Kentucky's history," Beshear said.

At least 25 people are dead after the rains devastated parts of eastern Kentucky on Thursday – and that death toll could rise. Fast rising water turned creeks into gushing rapids and roadways into rivers.

Residents in the small town of Elkhorn City, population 1,000, say they're the highest flood waters they've ever seen.

"Everything is gone," one Kentucky woman said after swimming to safety from her flooded home.

The National Weather Service is now calling for even more rain, threatening many parts of Kentucky along with areas in Virginia and West Virginia.

Severe flooding also hit St. Louis, Missouri leaving it underwater for the second time this week. And in Las Vegas, roadways were covered in water with several car rescues caught on tape.

However, flooding in Kentucky is becoming a common disaster scene in the state's Appalachian region. Some communities are still recovering from massive floods in January and February, with similar memories from 2020. This weekend's rain forecast is expected to bring more severe danger.

As the damage mounts, officials throughout the state are requesting prayers for people hit by the deadly floodwaters.

"Asking everybody to pray," Beshear said. "There's a lot of people out there who need help, who are really scared right now. And we're doing the very best we can to reach each and every one of them."

"I ask that people, when they remember to pray tonight, be with the people in your prayers that lost what they had – and they really need help from our state with this," Taylor said.