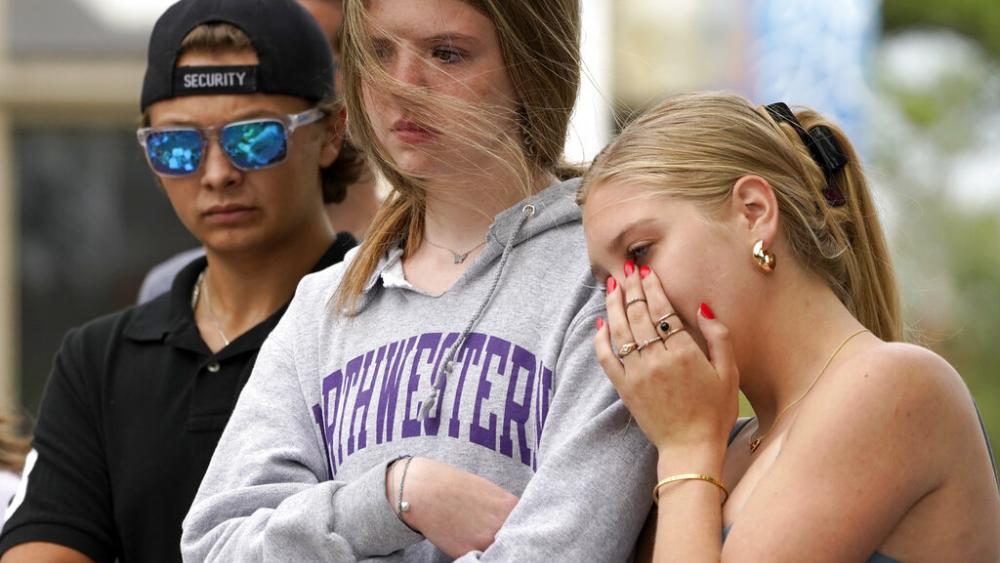 HIGHLAND PARK, Ill. (AP) — The man charged with killing seven people at an Independence Day parade confessed to police that he unleashed a hail of bullets from a rooftop in suburban Chicago and then fled to the Madison, Wisconsin, area, where he contemplated shooting up an event there, authorities said Wednesday.

The suspect turned back to Illinois, where he was later arrested, after deciding he was not prepared to pull off another attack in Wisconsin, Lake County Major Crime Task Force spokesman Christopher Covelli said at a news conference following a hearing where the 21-year-old man was denied bond.

The parade shooting left another American community reeling — this time affluent Highland Park, home to about 30,000 people near the Lake Michigan shore. More than two dozen people were wounded, some critically, and hundreds of marchers, parents and children fled in a panic.

Covelli said it did not appear that the suspect had planned another attack in Wisconsin, but fled there, saw another Independence Day celebration and “seriously contemplated” firing on it. The assailant had ditched the semi-automatic rifle he used in Illinois, but he had another, similar rifle and about 60 more rounds with him, according to Covelli.

Police later found his phone in Middleton, Wisconsin, which is about 135 miles (217 kilometers) from Highland Park.

For hours before his arrest, police warned that the gunman was still at large and that he should be considered armed and dangerous. Several nearby cities canceled events including parades and fireworks. Most festivities in and around Wisconsin’s capital city went ahead.

Madison Police Chief Shon Barnes told a news conference Wednesday that the FBI urged the department on Monday evening to prepare its SWAT team because investigators believed the gunman could be in the area. Barnes said he was not warned at the time that the shooter was considering carrying out further attacks.

Lake County Assistant State’s Attorney Ben Dillon said in court that the gunman climbed up the fire escape of a building above the Highland Park parade, “looked down his sights, aimed” and fired at people across the street. He left the shells of 83 bullets and three ammunition magazines on the rooftop. He initially evaded capture by disguising himself as a woman and blending into the fleeing crowd, according to police.

Some of the wounded remained hospitalized in critical condition, Covelli said, and the death toll could still rise. Already, the deaths from the shooting have left a 2-year-old boy without parents, families mourning the loss of beloved grandparents and a synagogue grieving the death of a congregant who for decades had also worked on the staff.

Lake County State's Attorney Eric Rinehart said he planned to bring attempted murder and aggravated battery charges for each individual who was hurt.

“There will be many, many more charges coming,” he said at a news conference, estimating that those charges would be announced later this month.

If convicted of the first-degree murder charges, the gunman would receive a mandatory life sentence without the possibility of parole.

The suspect, Robert Crimo III, wore a black long-sleeve shirt as he appeared in court by video. As the prosecutor described the shooting, he said little besides telling the judge that he did not have a lawyer.

On Tuesday, Thomas A. Durkin, a prominent Chicago-based lawyer, said he would represent Crimo and that he intended to enter a not guilty plea to all charges. But Durkin told the court Wednesday that he had a conflict of interest with the case. Crimo has been assigned a public defender.

Rinehart also left open the possibility of charging Crimo's parents, telling reporters that he “doesn’t want to answer” that question right now as the investigation continues.

Steve Greenberg, the lawyer for Crimo's parents, told The Associated Press that the parents aren’t concerned about being charged with anything related to their son’s case.

Questions also arose about how the suspect could have skirted Illinois’ relatively strict gun laws to legally purchase five weapons, including the high-powered rifle used in the shooting, despite authorities being called to his home twice in 2019 for threats of violence and suicide.

Police went to the home following a call from a family member who said Crimo was threatening “to kill everyone” there. Covelli said police confiscated 16 knives, a dagger and a sword, but said there was no sign he had any guns at the time, in September 2019. Police in April 2019 also responded to a reported suicide attempt by Crimo, Covelli said.

Illinois state police, who issue gun owners’ licenses, said Crimo applied for a license in December 2019, when he was 19. His father sponsored his application, and he purchased the semi-automatic rifles in 2020, according to Covelli.

In all, police said, he purchased five firearms, which were recovered by officers at his father’s home. He purchased four of the guns while he was under 21 and bought a fifth after his birthday last year.

The revelations about his gun purchases offered just the latest example of young men who were able to obtain guns and carry out massacres in recent months despite glaring warning signs about their mental health and inclination to violence.

Investigators who have interrogated the suspect and reviewed his social media posts have not determined a motive or found any indication that he targeted victims by race, religion or other protected status, Covelli said.