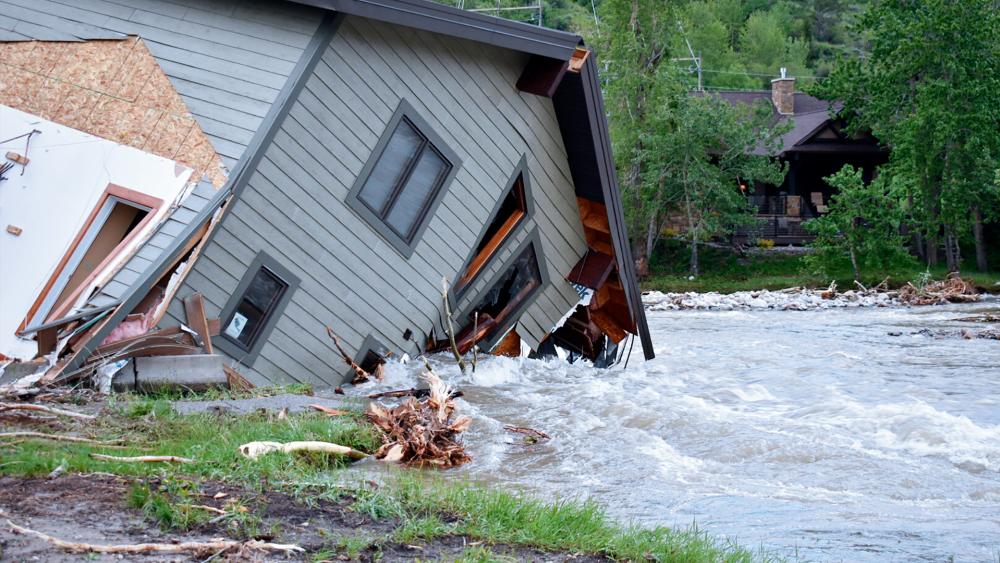 "It was just going really fast," said visitor Cindy Fogarty. "And the water was just taking logs down the river."

The massive flooding forced thousands to evacuate the national park.

"Lots and lots of folks experiencing lots of extensive damage," said Sheriff Brad Bichler of Park County. "And that's going to remain to be seen in the days to come."

The flood was triggered after near-record-high temperatures melted five inches of snow in higher elevations. The Yellowstone River overflowed its banks after days of rain and rapid snowmelt.

"We were right in the middle of it watching all the rivers rise. And we knew we had to get out," said one visitor.

Parts of a main highway in the park were also washed away.

Escaping the park turned into a dangerous journey as falling rocks were seen hitting an SUV.

And outside the park, major damage was reported in the town of Gardiner where washed out roads and bridges as well as mudslides made it nearly impossible for tourists to leave.

"We checked out of our hotel this morning and we're going to head into Yellowstone," explained Angela Fogarty. "And some man said, 'Have you not heard the news yet? He said you're not leaving anytime soon.'"

At least a dozen people were airlifted to safety by the National Guard.

In the meantime, extreme heat is baking a large part of the country.

Record-high temperatures for this time of year, are stretching from the Gulf states all the way north to the Great Lakes and into the Southeast.

Forecasters said a third of the country is under a heat advisory. Nearly thirty major cities recently tied or broke heat records. California's Death Valley reached 123 degrees over the weekend.

Meanwhile, the severe heat is creating unprecedented demand for power in Texas, triggering concerns over the state's power grid. Energy supplier Ercot says it has enough supply to meet the need.