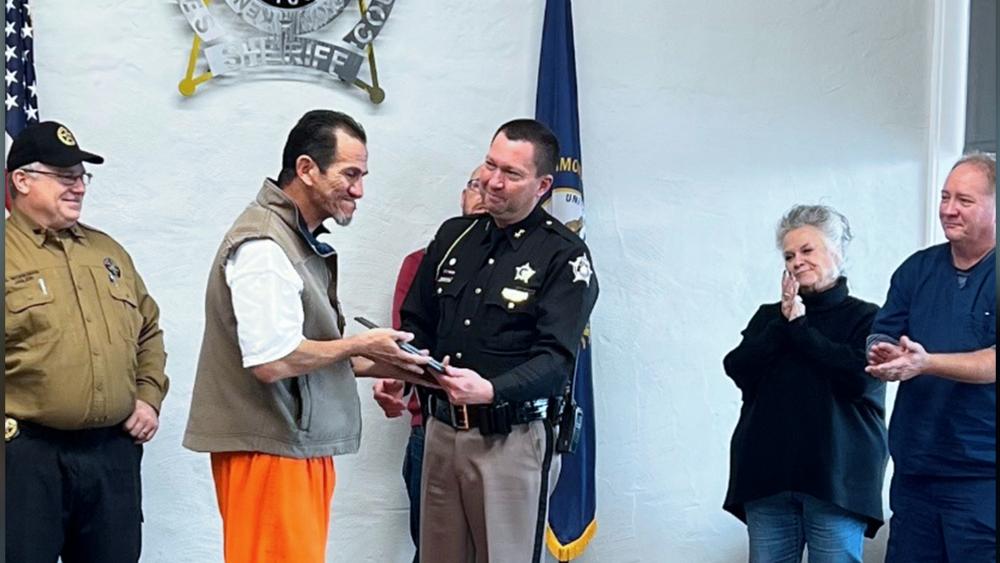 A Kentucky inmate was recently recognized for his heroic efforts to save tornado victims on Dec. 10, despite suffering from his own serious injuries.

In a Facebook post, the Graves County Sheriff's Office recalled that Marco Sanchez, who finished his sentence on March 1, was working his detail at the candle factory in Mayfield.

When the tornado hit the building, Sanchez dug himself out of the debris and rubble to start looking for survivors.

"He was trapped and suffered a broken leg and cracked ribs. He managed to find a small void in the rubble, and was able to crawl out to safety, despite his injuries," Sheriff Jon Hayden wrote. "Mr. Sanchez after freeing himself, with a broken leg and cracked ribs, unselfishly went and found tools and other items and returned and re-entered the rubble and render(ed) aid to those injured and freed several others, quite possibly saving human lives."

Sanchez says it was God who empowered him to react during those fearful moments, KFVS News reports.

"This is really God," said Sanchez. "I've had time to evaluate what I went through that night and everything that I did, I can honestly say it was God."

In the aftermath of the tornado, Sheriff Hayden said he continued to hear about an inmate who remained inside the collapsed candle factory to assist the injured.

"Days and weeks after the deadly tornado, I and others began hearing about an inmate who worked feverishly at the candle factory site," he wrote. "In passing, I continued hearing about this unnamed inmate to the point that it aroused my curiosity. We learned from some witnesses that the inmate in question was in fact Mr. Marco Sanchez."

After leaving the candle factory, Sanchez rode with a firefighter to the emergency room and received treatment for his injuries. Hayden said he even tried to turn himself in to a state trooper.

"The trooper told him that with everything going on, that he was not in a position to help him at that moment and to do the right thing," the sheriff explained. "Mr. Sanchez found a shuttle bus that took him to a shelter that had been put in place after he learned that the jail had been destroyed. Once arriving at the shelter, he was put in contact with jail staff whom at that time took him back into custody."

"Mr. Sanchez had a lot of decisions to make that night. He could have made the decision to only save himself, but he didn't," Hayden said. "His actions likely resulted in other lives being saved. The series of decisions he made over the next several hours were the right decisions and we applaud you for that sir."

The sheriff's office held a special ceremony for Sanchez last month, which his sister Gabriela Matloub attended. The two hadn't seen each other in 15 years, according to KFVS.

"The strength and the selflessness and just the thought of not thinking of him at that moment whether he was in pain or not just to know that there was other people that needed him and find the strength to go back and help," said Matloub.

After his release, Sanchez received another surprise from the sheriff's department.

"I got a car. I mean, my sister and everything but, the car was really something," declared Sanchez.

For now, Sanchez is focused on catching up with his family and Sheriff Hayden plans to help him get back on his feet.