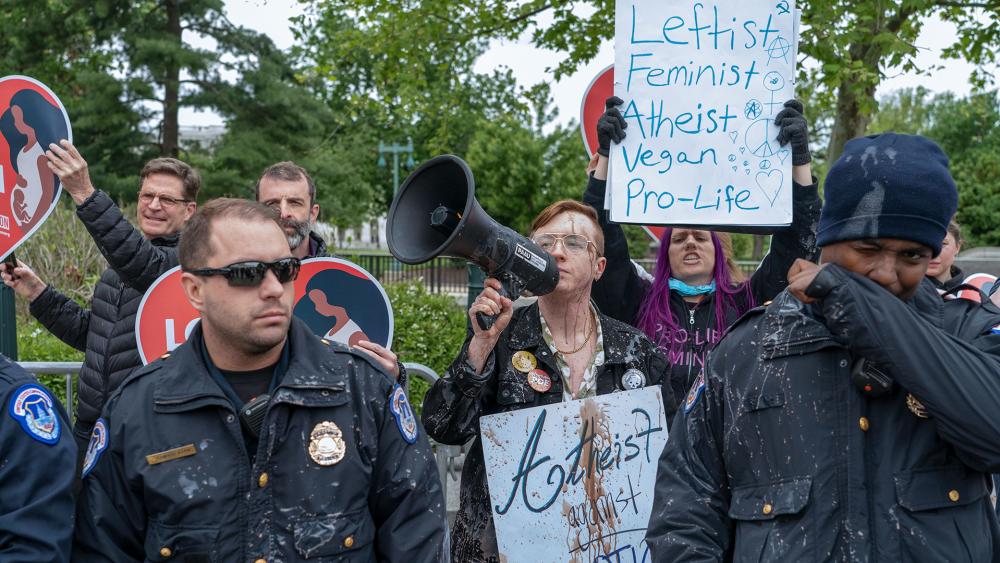 Pro-choice protesters attacked pro-life protesters and the U.S Capitol police who were on the scene during a demonstration outside the U.S. Capitol on Mother's Day, May 8, 2022 (AP Photo/Gemunu Amarasinghe)
6305826340112
Pro-Abortion Protesters Inflict Mother's Day Violence and Threats at Supreme Court Justices' Homes

The leaked Supreme Court draft opinion signaling the end of Roe v. Wade made Mother's Day an anxious one for churches and pro-life groups across the country.

In Madison, Wisconsin, vandals attacked the offices of the pro-life group Wisconsin Family Action on Sunday with an arson attack and a spray-painted warning that “If abortions aren’t safe, then you aren’t either.”

Earlier in the week in Boulder, Colorado, crews worked to remove graffiti, paint, and broken glass left behind after a night of vandalism at Sacred Heart of Mary Church.

Pro-abortion criminals targeted a church in Boulder Tuesday night, smashing windows and spray painting Sacred Heart of Mary Church in Boulder. The vandalism to the property will cost thousands of dollars to repair. https://t.co/Pp7tJEmXtT

In the D.C. area this weekend, dozens protested outside the homes of conservative Justice Brett Kavanaugh and Chief Justice John Roberts.

Sen. Ted Cruz accused Joe Biden of tacitly encouraging the violence by not condemning it. "It was shameful that the White House refused to condemn violent protestors threatening families of the Supreme Court," Cruz told the program Sunday Morning Futures.

Justice Kavanaugh's neighbor is organizing the protest outside his home. Teacher Lacie Wooten-Holway declared "We’re about to get doomsday, so I’m not going to be civil to that man at all.” https://t.co/I9NrJizWQP It is the license of the age of rage. https://t.co/eP8YO7aX4M

The energy is markedly more negative outside Kavanaugh’s house. The anger has become much more palpable than outside any other justices’ house. pic.twitter.com/zY2OY34hcA

On Monday morning, Biden did condemn the fire-bombing attack of the pro-life group but did not specifically oppose the protests at the homes of Supreme Court justices.

Pro-choice protesters attacked pro-life protesters and the U.S Capitol police who were on the scene during a demonstration outside the U.S. Capitol on Mother's Day, May 8, 2022 (AP Photo/Gemunu Amarasinghe)

Democrats say the abortion issue will bring out liberal voters like never before and could change the course of the midterm elections.

Republican Sen. Lindsey Graham disagreed. "I don't believe it's going to change the outcome of the 2022 elections at all. Single issue voters seldom decide the outcome of an election," Graham told Fox News Sunday.

House Speaker Nancy Pelosi said the science hasn't changed in the decades since Roe, only the court has. But Anne O'Connor of the National Institute of Family and Life Advocates told CBN's Christian World News program that advances in technology have played a major role in changing attitudes about abortion.

"When a woman gets an ultrasound to confirm if she even has a viable intrauterine pregnancy...studies show when they see their baby for the first time on that ultrasound screen, they bond with that baby," O'Connor said.

Democratic Senate Majority Leader Chuck Schumer said the Senate will vote on a federal bill to protect abortion this week, but it's expected to fail.

His GOP Senate counterpart Mitch McConnell says a national abortion ban is possible' if Republicans gain control of the Senate this year.