'Blood Is on Your Hands': Vandals Deface Focus on the Family Sign After CO Mass Shooting, Leave Behind Bible Verse 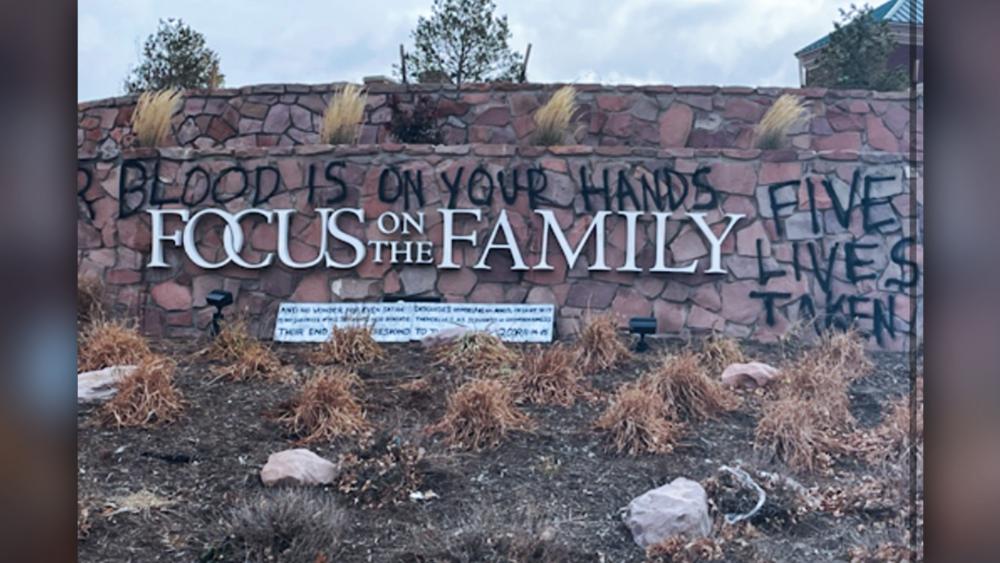 Popular Christian organization Focus on the Family had its office sign vandalized Thanksgiving Day, with the defacer leaving behind a graffiti message blaming the ministry for a recent mass shooting.

“Their blood is on your hands,” the message read. “Five lives taken.”

According to authorities, the message was spraypainted at some point Thursday morning outside Focus on the Family’s Colorado Springs, Colorado, office.

The graffiti follows a deadly attack Nov. 19 at Club Q, an LGBTQ nightclub located in the area. Anderson Lee Aldrich, 22, is accused of killing five and injuring others during the mass shooting.

Focus on the Family, founded in 1977, holds to the traditional biblical view marriage is defined as one man and one woman. These beliefs and the organization’s work seem to be at the center of the defacing.

A press release and report back from those who completed this direct action: pic.twitter.com/LszpJrTmzX

Jim Daly, president of Focus on the Family, told KCNC-TV right after the shooting his organization is mourning what unfolded at Club Q along with the rest of the community. And he made it clear his organization doesn’t permit or endorse hatred, the outlet noted.

“I think in a pluralistic culture now, the idea is: How do we all live without treading on each other?” Daly said.

He later confirmed the vandalization of the sign in a Friday statement and called for prayer and healing in the wake of the shooting.

“We recognize the community is hurting in the aftermath of the reckless and violent actions of a very disturbed individual,” Daly said. “This is a time for prayer, grieving, and healing, not vandalism and the spreading of hate.”

The Christian leader also said the families of those impacted by the shooting are in his prayers and encouraged others to invoke the Lord on their behalf.

“We urge everyone to pray for peace, and we also pray for the individual or group responsible for this mischievous and unwarranted defacing of our ministry’s property,” he said.

A Twitter account called “Colorado Peoples Press” published a statement purportedly written by those responsible for the graffiti. The alleged vandals accused Focus on the Family of “incredible violence” against the LGBTQ community.

“It is no accident that this happened in Colorado Springs, a city steeped in homophobia, transphobia, and white supremacy,” the statement read, in part. “It is no surprise that someone did this in the city that is home to such a hateful organization as Focus on the Family.”

The statement also references 2 Corinthians 11:14-15 (NIV), seemingly alluding to the vandals’ belief Focus on the Family is an evil organization. Those verses read: “And no wonder, for Satan himself masquerades as an angel of light. It is not surprising, then, if his servants also masquerade as servants of righteousness. Their end will be what their actions deserve.”

Photos of the spraypainted sign also appear to show another message left outside the Focus on the Family headquarters. An accompanying sign includes the words of 2 Corinthians 11:14-15.

Authorities confirmed they’re investigating the incident and currently have no suspects.

“We went out there to investigate if there was a crime that took place,” Colorado Springs Police Department Sgt. Jason Ledbetter told The Gazette. “There is no suspect information at this time.”