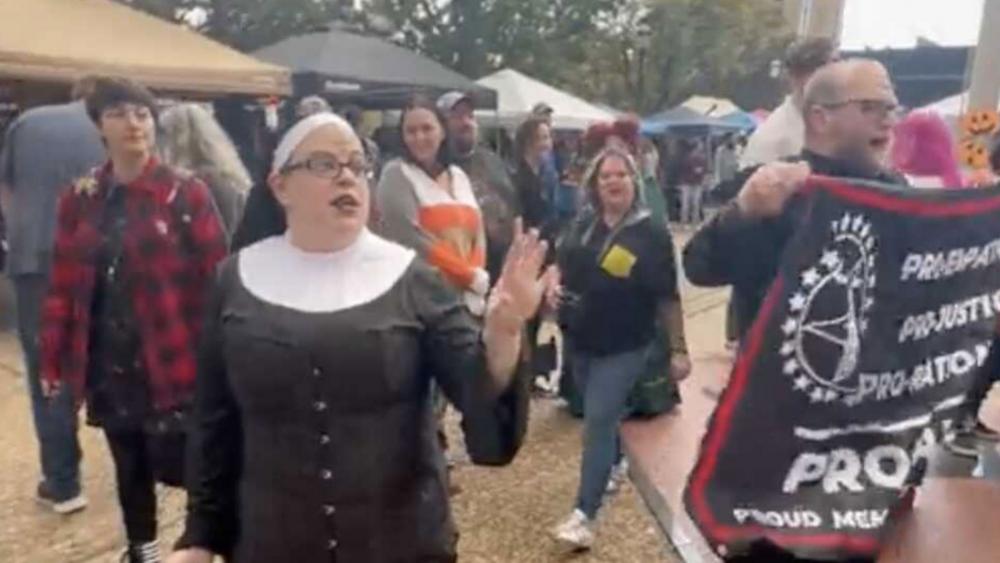 Christians in Tyler, Texas, came together to pray ahead of a festival held Saturday by self-professed Satanists, atheists, heathens, spiritualists, and so-called “other’d folks” who participated in what they dubbed “unbaptisms.”

“As a Christian, we’re called to a spiritual battleground, and I think this is an opportunity to exercise our strength in our relationship with Christ,” Lauren Ethredge-Langas, a member at the Church of the Pines, told KVEO-TV of the decision to pray for those gathered Saturday for the “Pagan Pride Fest.”

TST DFW will host our very first #unbaptism today !
Please be careful out there. Tyler Square is private property until the end of Pagan Pride Fest. Don't engage with protestors if they show up. Don't speak to the media on our behalf. Thank you to #TheFickleWitch for hosting us! pic.twitter.com/Dd5tV7xKBs

Donnell Walder, the pastor of W.O.W. Church, emphasized the non-combative nature of the Christian presence and prayer event ahead of the Satanic festival.

“We didn’t come down to bash anyone’s religion, but we wanted to stand as believers and pray,” he said.

The believers’ intentions were certainly different from those gathered for the “Pagan Pride Fest.” In a video posted by independent journalist Tayler Hanson, one attendee of The Satanic Temple purportedly said she wanted to “bother Christians” with her presence at the event.

I talked to a mother and her child that were in attendance at the Satanic Temple event in Tyler, TX today.

The daughter stated that she “wants to bother Christians”. pic.twitter.com/n5KZenajLn

Additionally, many of the festival’s participants were wearing religiously themed outfits, mocking those who believe in God. Some also painted upside-down crosses on their foreheads while others participated in what they called “unbaptism,” a sacrilegious ritual reportedly sold to attendees for $10.

Those who partook in the ritual were purportedly given certificates that stated, “All bonds of servitude have been broken. Power and agency have been restored. Thyself is thy master. Hail Satan!”

It should be noted The Satanic Temple states that — despite its name — its adherents do not worship Satan. Rather, the far-leftist organization’s use of the name “Satan” is “to embrace rational inquiry removed from supernaturalism and archaic tradition-based superstitions.”

However, Satanists were seemingly commingling Saturday with “spiritualists” and witches, those who do worship and/or call upon demonic forces.

Some who were at the “Pagan Pride Fest” claimed it was not at all religious. The organizer of the event, Raynie Castañeda, told the Tyler Morning Telegraph the event was “not Satanic.”

But that is not what appeared to be depicted in some of the content from the festival.

One video posted by Hansen appeared to show festival patrons laughing at and mocking a Christian man praying for those who were “unbaptized” during the Saturday event.

Members of the Temple Of Satan are dancing and cackling around a man praying for the attendees of the “Unbatism” event. pic.twitter.com/1asslDNMfT

The mean-spirited responses certainly did not deter the Christians gathered to pray, though.

Members of the Gospel Barn, a small church in Troup, Texas, traveled to the festival Saturday.

Two of the church’s attendees, Brandon and Kelsey Chrisman, told the Telegraph they were “just showing love and trying to bring light to the darkness as much as we can.”

“We’re not here to judge — just love,” they added.