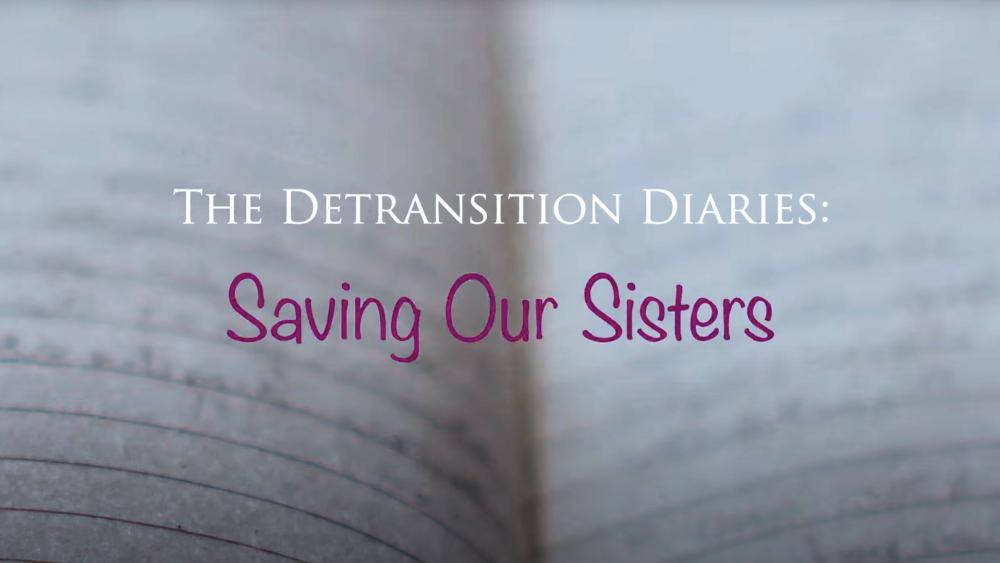 A new documentary, released Monday, shares the compelling stories of three young women who formerly identified as transgender and reveals how their transition from female to male did not resolve their issues of gender dysphoria, but only made it worse.

The Center for Bioethics and Culture Network is behind "The Detransition Diaries," a film that pulls back the veil on the potential emotional and physical trauma of transitioning for women.

"We are following the news and the studies, and the evidence that shows this uptick in rapid-onset gender dysphoria [is something] young girls are particularly prone to," Jennifer Lahl, the film's producer, told The Heritage Foundation's Daily Signal. "Young girls are getting sucked into this."

In the documentary, Helena Kerschner, Grace Lidinsky-Smith, and Cat Cattinsonn share that they believed their mental and emotional issues would be solved by transitioning to the opposite sex.

The film's Vimeo page describes what happened with these girls next:  "Each changed their names, their hair, their pronouns, thinking that this would help them and relieve them from their duress and suicidal ideations. Nothing could have been further from the truth."

The Detransition Diaries: Saving Our Sisters from CBC Network on Vimeo.

"I decided to call myself a demi-girl which is one of the 40 million genders and that basically means I'm mostly a girl, but I'm a little bit not a girl," Kerschner, 23, told Tucker Carlson. "Then after that, I went to demi-boy. And then after that I went to gender-fluid and after that I eventually went into trans-boy. All this took like two or three years of going through this repetitive cycle of changing this identity...and it was just never enough."

The young women also underwent hormone treatment and one had her breasts removed as well.

"Right after the surgery, I had been hit with this awful feeling of having made a huge mistake...like undeniable...like 'oh no, what I have done'," said Grace Lidinsky-Smith, a detransitioner featured in the film. "I was looking down at my body and seeing these weeping gashes on my chest and just having the most awful feeling."

With the culture embracing the transgender message more and more, the phenomenon has been rapidly escalating among teenagers.

A Williams Institute report shows that the number of young people who identify as transgender has nearly doubled in recent years.

The study found that 13 to 25-year-olds accounted for a disproportionately large share of the transgender population. While younger teenagers were just 7.6% of the total U.S. population, they made up roughly 18% of transgender people.

It is a trend that has also turned into big business as cautionary messages have been canceled.

In that same study, 70% of parents reported that the clinician did not request any medical records before proceeding and nearly 24% of the parents who knew the content of their child's visit reported that the child was offered prescriptions for puberty blockers and/or cross-sex hormones at the first visit.

"I had a ton of issues with my academics and my mental health, but I never really got help with that," Kerschner said. "As soon as I said I was trans, it was all hands on deck."

In the documentary, Kerschner and Cattinson also share that Planned Parenthood quickly helped them get on testosterone–no questions asked.

"I went to Planned Parenthood. One appointment [that] took about an hour," Kerschner explained.

"I called Planned Parenthood, we had about a 30-minute phone conversation, and then I was prescribed testosterone over the phone," Cattinson shared.

All three of the women shared that at some point they regretted transitioning and that the physical changes with their bodies only exacerbated their feelings of suicide, depression, and anxiety.

Kerschner said one day she finally reached her breaking point.

"It just finally hit me like, 'Oh my God, this has all been a mistake,'" she said.

Lidinsky-Smith and Cattinson say they both had similar experiences and that the road to healing included self-acceptance.

"It became important to just accept myself as myself," Lidinsky-Smith explains.

All three women are outspoken advocates about their detransition and feel there were pushed too quickly into the decision by trusting adults.

"It's really weird to think about how much I fell for the progressive-marketed version of body dysmorphia," Lidinsky-Smith recently tweeted.

"I really feel afraid for these young girls," Kerschner told Tucker Carlson. "I consider myself lucky because I was able to get out of it unscarred medically, but there are so many young people who can't say the same."

"It is devastating to be lied to by adults at school and by medical professionals, to be told that your body is wrong and you need to change it," she added.