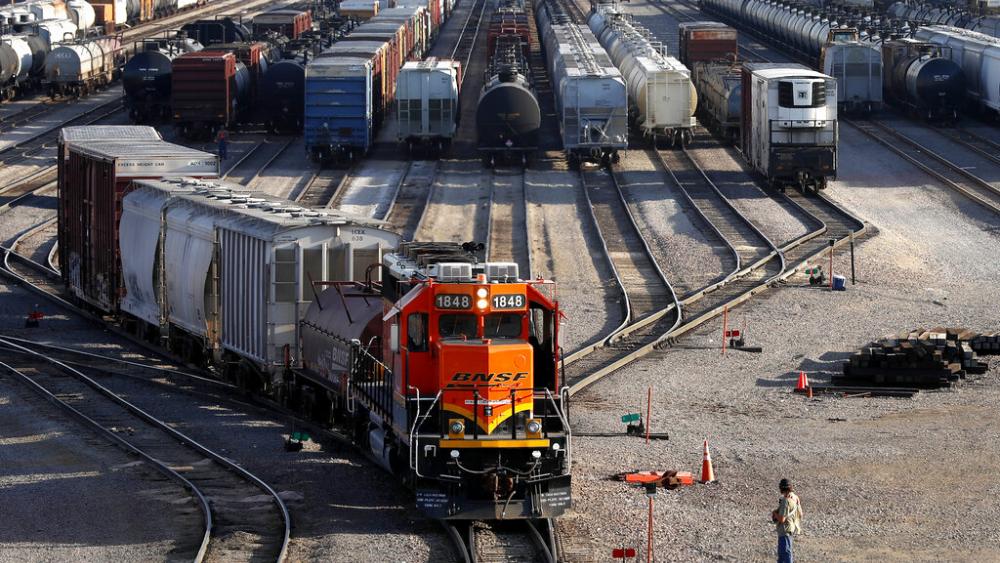 President Joe Biden says a tentative agreement has been reached between railway companies and unions to avert a strike that would have sent shockwaves throughout the economy.

Biden said in a statement early Thursday the agreement is  "an important win for our economy."

More than 100,000 railroad workers have threatened to walk off their jobs beginning on Friday over worker pay, health care, and other issues. Businesses fear a strike would send prices higher amid record inflation and supply chain issues.

Biden says the tentative deal will give rail workers "better pay, improved working conditions, and peace of mind around their health care costs: all hard-earned."

"The agreement is also a victory for railway companies who will be able to retain and recruit more workers for an industry that will continue to be part of the backbone of the American economy for decades to come," he added.

The deals that have been considered so far have closely followed the Presidential Emergency Board's recommendations that called for 24% raises over five years, $5,000 in bonuses and one additional paid leave day a year. But the two biggest unions representing conductors and engineers have been holding out because they want the railroads to go beyond those recommendations and address some of their concerns about strict attendance policies and working conditions.

If a deal is not secured, then passenger service, supply chains, and jobs could be affected, costing the economy an estimated $2 billion per day.

Suzanne Clark, the head of the U.S. Chamber of Commerce, said Monday that "a national rail strike would be an economic disaster — freezing the flow of goods, emptying shelves, shuttering workplaces, and raising prices for families and businesses alike."

Bloomberg explains the impact on the supply chain would be huge because trains transport 28% of all U.S. freight.

The deadline for a deal to be made is Friday at 12:01 AM Eastern.

On another crucial economic front, the U.S. could see a rise in gas and energy prices this winter.

Treasury Secretary Janet Yellen said higher prices are a risk as the European Union confronts the belligerent regime of Vladimir Putin by implementing a plan to halt Russian oil imports.

"This winter, the European Union will cease, for the most part, buying Russian oil and in addition, they will ban the provision of services that enable Russia to ship oil by tanker," Yellen said. "It is possible that could cause a spike in oil prices."

With winter approaching, the 27 EU member countries are struggling to contain an energy crisis that could lead to rolling blackouts, closed factories and a deep recession. Russia has already cut gas supplies partially or entirely to 13 member countries.

Gas prices in the U.S. reached all-time highs earlier this year. While they've dropped in recent months, the average price for a gallon of gas is still above $3.70, up from $2.39 per gallon at the beginning of 2021.

And inflation remains far higher than many Americans have ever experienced. It is keeping pressure on the Federal Reserve and has put the Biden administration on the defensive for its economic policies.

Consumer prices remained stuck at a whopping 8.3% in August compared with a year earlier, down slightly from the 8.5% inflation in July and a four-decade high of 9.1% in June.

The stock market tumbled Tuesday as Wall Street comes to the realization that inflation isn't slowing as much as it had hoped. The S&P 500 sank roughly 3% in early trading, after rising for four straight days. Bond prices also fell sharply after today's report showed inflation came in at 8.3% instead of the 8.1% economists expected.

Next week, most Fed watchers expect the central bank to announce a third straight three-quarter-point hike, to a range of 3% to 3.25%. The Fed's rapid rate increases — the fastest since the early 1980s — typically lead to higher costs for mortgages, auto loans and business loans, with the goal of slowing growth and reducing inflation. The average 30-year mortgage rate jumped to nearly 5.9% last week, according to mortgage buyer Freddie Mac, the highest figure in nearly 14 years.