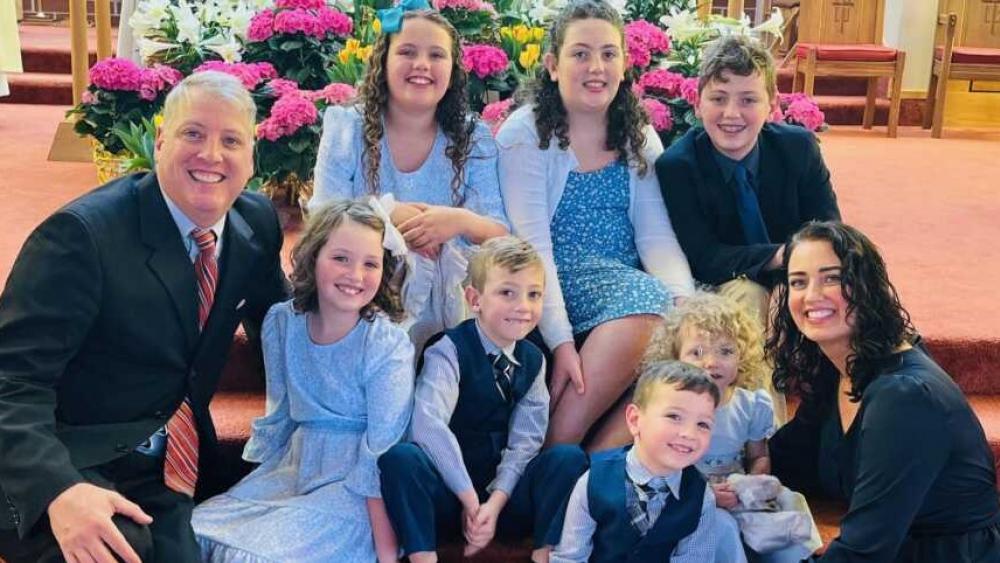 (Photo courtesy of the Houck Family)

FBI Philadelphia released another statement this afternoon on the arrest of Mark Houck, the Catholic pro-lifer accused of FACE Act violations, accusations his representatives flatly deny.

“Extensive planning takes place prior to the service of any federal warrant. The FBI then employs the personnel and tactics deemed necessary to effect a safe arrest or search. While it’s the FBI’s standard practice not to discuss such operational specifics, we can say that the number of personnel and vehicles widely reported as being on scene Friday is an overstatement, and the tactics used by FBI personnel were professional, in line with standard practices, and intended to ensure the safety of everyone present in and outside the residence.”

The update failed to detail how many agents were on site, nor whether or not guns were drawn.

UPDATE (9/26/22, 12:00 p.m.): The FBI is refusing to clarify what happened during the arrest Friday of pro-life Christian activist Mark Houck.

In a statement CBN’s Faithwire, the FBI said: “With regard to events Friday, there are inaccurate claims being made regarding the arrest of Mark Houck. No SWAT Team or SWAT operators were involved. FBI agents knocked on Mr. Houck’s front door, identified themselves as FBI agents, and asked him to exit the residence. He did so and was taken into custody without incident pursuant to an indictment.”

CBN had not claimed SWAT was involved, though other outlets did. When asked to confirm how many agents were involved in the arrest and if they had guns drawn, the FBI told CBN, “We have nothing further for release at this time.”

Houck family representative Brian Middleton took issue with the FBI’s response, which zeroes in on the family getting a technical term incorrect while in the midst of being “traumatized by a whole bunch of FBI guys with weapons, body armor and shields” that were banging on their door. “Maybe we should also diagram their sentences to make sure there are no dangling participles.”

There may have been 15-20 agents at the scene, but denied 25 were there. The agents who came to the door had guns out and at the ready, according to this FBI source, but the guns were never pointed at Houck or his family and were lowered or holstered as soon as Houck was taken into custody.

Houck was handcuffed with a belly chain, according to a senior federal law official familiar with the situation. In this process, the suspect’s handcuffs are attached to a chain around the belly so the person doesn’t have to sit in a car with handcuffs behind his back.

The FBI used a major show of force to arrest pro-life Christian Mark Houck, 48, with dozens of agents reportedly descending on his home with guns drawn as Houck’s wife and children looked on in horror.

Early Friday morning the FBI arrived at the Houck’s residence in Bucks County, PA and began pounding on the door. Despite putting his hands up and willingly cooperating, multiple agents pointed guns in Mark’s face as his family – including his seven children – were forced to watch their dad “shackled” and taken away, according to family representative Brian Middleton, who spoke with CBN’s Faithwire.

Houck’s wife Ryan-Marie described the shocking scene to LifeSiteNews, saying her husband was pleading with agents. “‘Please, I’m going to open the door, but, please, my children are in the home. I have seven babies in the house.’ But they just kept pounding and screaming.” She added that they “had big, huge rifles pointed at Mark and pointed at me and kind of pointed throughout the house.”

“This show of force carried out by the Biden regime against ordinary Americans is an abuse of power that stands against the fundamental principles on which our country was founded,” Pennsylvania State Senator and Republican nominee for Governor Doug Mastriano said in a statement.

This massive display by the FBI – Houck claims 25-30 heavily armed agents were used to haul him in – raises serious questions as to why so much force was deemed necessary. The FBI raid stems from a minor altercation back in October 2021 with a volunteer at a Planned Parenthood abortion clinic in Philadelphia. Police were called, but declined to pursue the case because of lack of evidence.

The volunteer, 72-year-old Bruce Love (who is identified only as “B.L.” on the indictment), is familiar with Houck, as the two have crossed paths at the Philadelphia abortion clinic many times previously.

The indictment against Houck claims he “assaulted” Love only “because Love was a volunteer at the abortion clinic”. According to Houck’s family representative, that’s not what happened.

Houck was at the abortion clinic praying and ministering within his legal rights (on the sidewalk, not clinic property) when, according to Middleton, it was Love who approached Houck’s 12-year-old son and began unleashing a string of vile comments, cursing the young man. That’s when Houck intervened, and eventually pushed Love in order to protect his son, causing Love to fall to the ground. Then police were called but they eventually decided there was a “lack of evidence” of an assault taking place and declined to pursue the issue any further.

Love filed a criminal complaint against Houck, but failed to show up to any of the court hearings, prompting the judge to dismiss the case.

Six days after the case was dismissed, Houck received a target letter from the DOJ notifying him he was the subject of a federal grand jury investigation. According to Middleton, Houck and his attorneys promptly replied to this notice but never heard back from the government – until Friday morning when the FBI began pounding on their door.

“They were absolutely compliant, and there was no reception to their compliance,” Middleton said.

In a press release from the DOJ, they claim Houck violated the Freedom of Access to Clinic Entrances (FACE) Act:

“Assault is always a serious offense, and under the FACE Act, if the victim is targeted because of their association with a reproductive healthcare clinic, it is a federal crime,” said U.S. Attorney Romero. “Our Office and the Department of Justice are committed to prosecuting crimes which threaten the safety and rights of all individuals.”

The DOJ seems less eager to punish those responsible for the wave of recent assaults against pro-life pregnancy centers, with no FBI arrests being made despite 60-plus attacks on crisis pregnancy centers.

CBN’s Faithwire has reached out to the FBI for comment, but they have yet to respond. We will update this article with any response they provide.