'I Lean on Him': Eagles QB Jalen Hurts Shines on the Field, but Says It All Points to a Faithful God 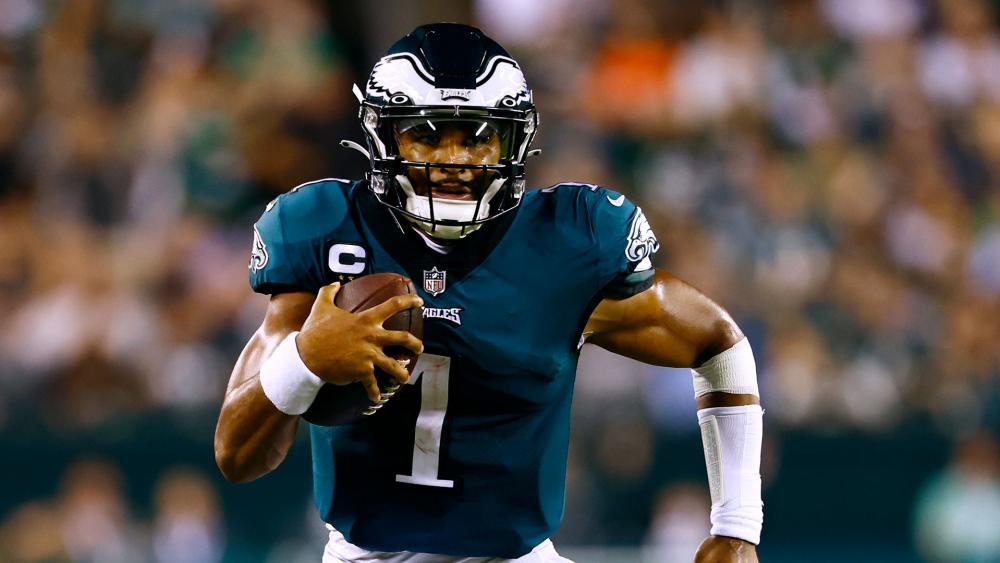 The Philadelphia Eagles star quarterback Jalen Hurts is off to an incredible 2-0 start in this new football season. He's being praised for his role in leading the NFL's top offense, and his success points fans straight to God.

"Be who God called you to be." That's what his Twitter banner image says, and that's the way he's living, being bold about his faith and his calling to be a light on and off the football field.

He led the Eagles to victory on Monday night by scoring two rushing touchdowns himself, along with this epic 53-yard TD pass.

Despite his individual and team success this season, the 24-year-old says it is all about God.

"I've just matured and realized that God is everything," Hurts said in a recent interview with CBS Sports, "and He's worthy of praise. You have to put Him at the center of everything that you do. That's what I believe."

"All my spiritual wisdom — all of my wisdom as a whole — comes from Him, in some way, shape, or form, whether that be passed down from my father, my mother, my grandmother. I just think, in all the things that we experience in life — good, bad or indifferent — you have to keep Him in the center," he added.

Hurts shows he keeps God at the center of the game by taking a knee on the field and praying.

A moment of prayer for Jalen Hurts before he takes the field for Day 3 of Eagles training camp. pic.twitter.com/hvVYBFdaxQ

His faith is also clearly part of his social media life, tweeting in 2019 an image of him praying on the field with the familiar adage, "He's an on-time God!"

He often tweets Bible verses too. This past Easter, he acknowledged Christ's resurrection referencing Luke 24.

Hurts recognizes that his faith has carried him through some tough seasons, including, as the Christian Headlines reports, being benched after his freshman year at the University of Alabama.

"Whatever it is you're going through, never lose your trust in God and never lose your faith in God," he told Faith on the Field. "Keep your head down, be graceful, keep on controlling what you can. Give it to the Lord and do your best. Regardless of the situation, you may not know now, but later you'll understand."

Hurts transferred to the University of Oklahoma and became a top performer, eventually getting drafted by the NFL in the second round in 2020.

For sports fans, Hurts now carries the weight of taking the Eagles to the Superbowl on his shoulders, but the young quarterback is putting everything into God's hands.

"God only made me one way," he told CBS Sports. "That's to be me. That's to be Jalen Hurts. I think, being in this city, being the quarterback for the Philadelphia Eagles, and just having the opportunity to play the game I love most, in the best city of football, I just go out there every day and I am who I am, and I keep God in the center, I give Him all the praise, I lean on Him all the time, and I know that everything unfolds the way it's supposed to."