Seeing Red and Voting Red: Why Parents May Be the New GOP 'Swing Voters' in November's Midterms 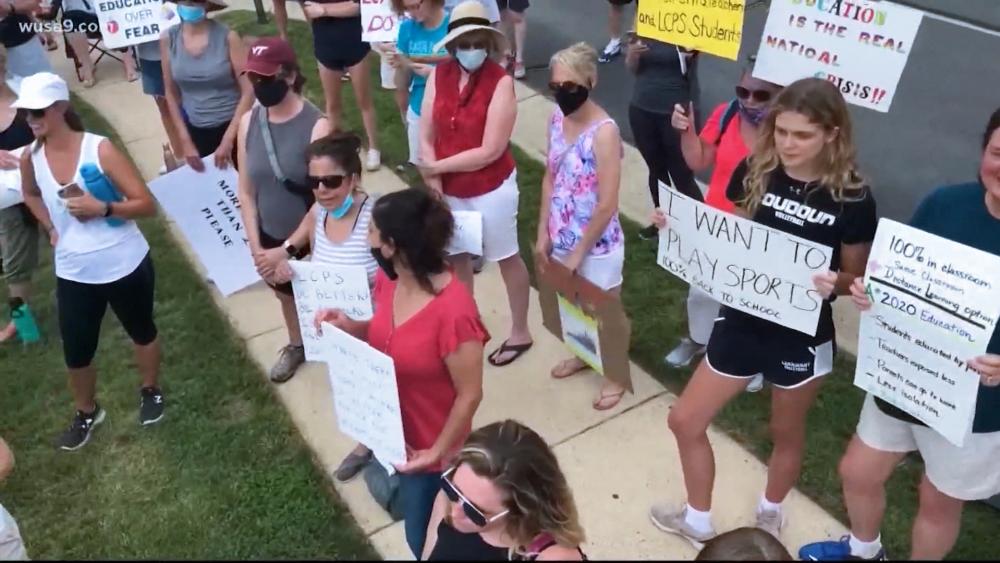 School shutdowns during the pandemic gave parents a front-row seat to their kids' education. Many of them didn't like what they saw.

The continuing fallout has shaken school districts around the country.

Just ahead of the midterm elections, new polls suggest Democrats could be losing credibility on an issue they have long dominated.

Some believe angry parents could shake up the midterms as the new swing voter. For more than two years, parents have faced challenges from school closures and mask mandates to gender policies.

American education is seen as a growing concern leading to predictions many parents seeing red might vote that way too. Months of remote learning infuriated parents around the country.

"There are people like me and a line of other people who will gladly take your seat," shouted an irate Brandon Michon at a Loudoun County Virginia school board meeting last year.

Activist groups, largely Republican, launched school board recalls and filed lawsuits. Since 2020, they've not only been attacking school closures but Critical Race Theory, pornography in textbooks, transgender policies, and more.

The proliferation of parent voices is so loud that they've been deemed this election cycle's political heavyweights. "The ball is absolutely in their court. I think parents are getting a sense of how much power they have," said Debbie Veney of the National Alliance for Public Charter Schools.

Midterms looming, a rash of new polls is raising red flags for Democrats, suggesting the party is losing the battle on education. The numbers show that, as confidence falls, more voters are favoring conservative classroom policies.

"Whatever agenda is going on, we need to understand what our rights are, how easy it is to lose your freedoms," said Michelle Mege, a mother and independent voter.

According to a Harris/National Alliance for Public Charter Schools poll, 82% of parents say they will even cross-party lines for a candidate whose education platform they support.

"A number as high as 82% is astounding. Also, I was interested to find it was consistent among all political ideologies," said Veney.

The trend is especially apparent among black parents and those of special needs children. The power of the polls was on full display last fall in Virginia. "Parents are certainly the swing vote that delivered Virginia to the Republicans," said Lanae Erickson of the think tank Third Way.

Republican Glenn Youngkin pulled off an unlikely upset in a state Joe Biden handily won in 2020.  Youngkin made inroads across party lines by promising parents a seat at the table, while his Democrat opponent told them they should have none.

It was education that also helped land Florida's Republican Ron DeSantis in the governor's mansion.

"Ron DeSantis won that race because black women voted against their political party specifically on the issue of school choice," said Veney.

In another striking switch, the numbers show many parents overwhelmingly consider education more important than the economy or health care.

Still, pundits insist both parties have work to do.

"Democrats have lost trust when we look at the numbers. But it doesn't exactly mean Republicans have gained that trust. So, it creates opportunities for both sides to gather those voters," said Josiah Gaiter of FreedomWorks.

With the election just weeks away, some political observers say Democrats would be well served by going back to the basics.

"Talk about the quality of our schools. Make sure children are safe and learning. Not get caught up in all these conversations about cultural and social issues. I think that would really resonate with swing voters," said Erickson.

By a 32-point margin recent polling also suggests parents would favor candidates who supported teaching less about race and more about core subjects like math and reading.

The data also suggests education could even become a "single voter issue" this fall, meaning voters may cast their ballot based on this issue alone.