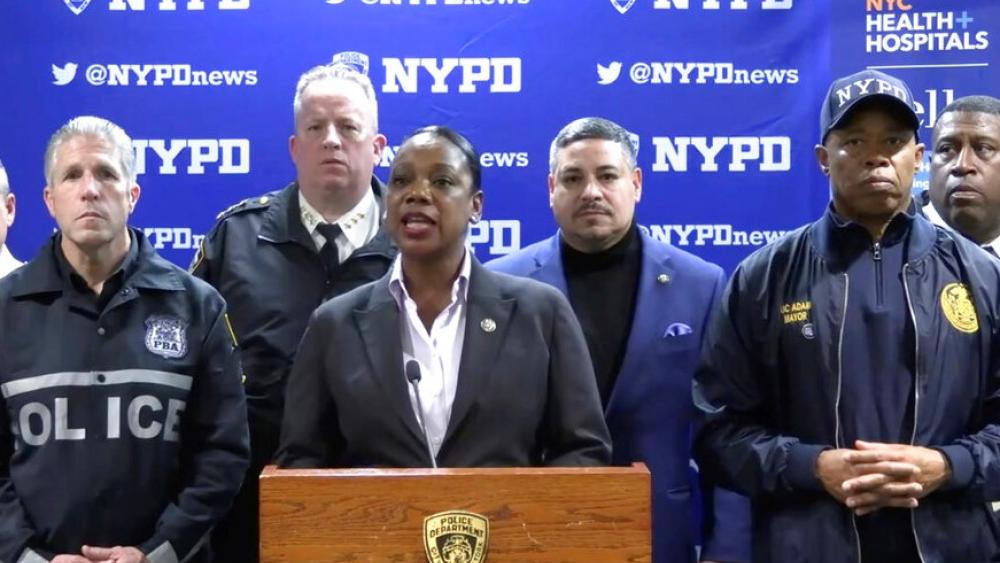 Authorities in New York City are investigating whether a man who attacked three police officers with a machete at a New Year's Eve celebration was inspired by radical Islamic beliefs.

The attack took place after 10 p.m., eight blocks from Times Square, just outside the high-security zone where revelers are screened for weapons.

The man struck two of the three officers with a machete.

New York City Police Commissioner Keechant Sewell said, "Unprovoked, a 19-year-old male approached an officer and attempted to strike him over the head with a machete. The male then struck two additional officers in the head."

One of the officers shot back, hitting the suspect in the shoulder.

After hearing the shots, those on the scene celebrating New Year's Eve began running away in fear. Andrew Dyachkin, a tourist from South Carolina, said, "We thought someone is trying to shoot, you know, as many people as possible. Another mass shooting."

All three of the officers have been released from the hospital.

New York Mayor Eric Adams praised the police response saying he spoke with one of the officers as he was being stitched up.

"He understood that his role saved lives of New Yorkers today. And we're really pleased by the response and how our offices handled this situation," Adams said.

Investigators traveled to the home of the suspect, 19-year-old Trevor Bickford from Maine.

They believe he traveled to New York City earlier in the week and are examining whether he came to New York specifically to attack police officers.

His mother reportedly told authorities she was concerned her son was moving toward dangerous Islamist views. And his writings reportedly indicate he had been recently radicalized.

FBI Assistant Director Michael Driscoll from the NY Field Office said, "The FBI through the Joint Terrorism Task Force is working very closely with them to determine the nature of this attack and we will run every lead to ground."

But the New York Police Department is also pointing out that a security bulletin had warned that jihadist websites had called for attacks like this, using tactics like stabbings.

Sources told ABC News that a diary reportedly belonging to the suspect was found at the scene of the attack. They said the last entry indicated he thought he would die in the attack and requested a burial according to Islamic tradition.

As for the officers, all three have been released from the hospital. The mayor pointed out that one of them had just graduated from the academy on Friday.

"It just goes to show you, if it's not the first day, it could be your last day -- the actions that police officers must take every day are life threatening situations," Adams said.