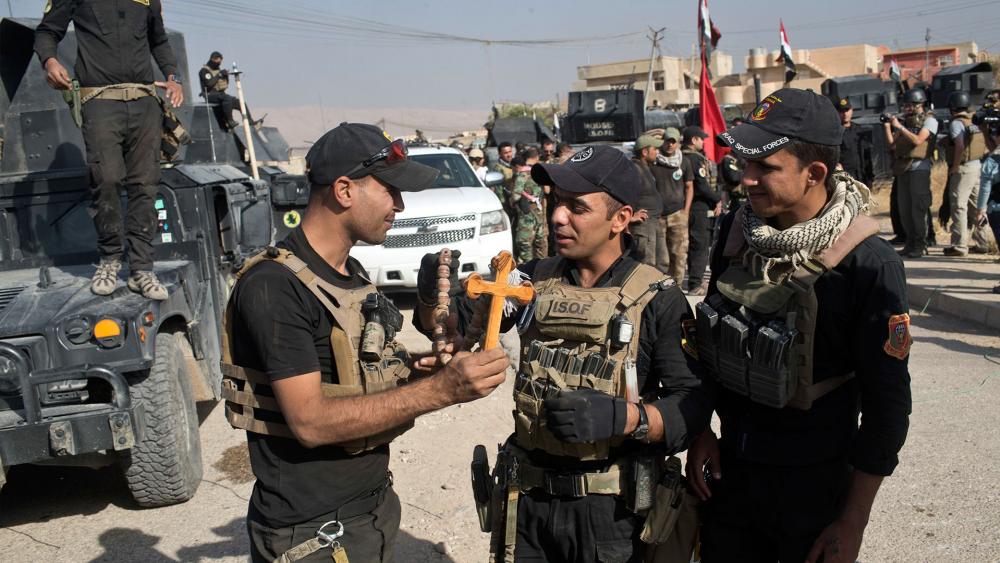 Church bells rang out over the Christian town of Bartella, Iraq, for the first time in more than two years Friday as Iraqi soldiers celebrated their victory over ISIS.

Kurdish troops and Iraqi special forces killed more than 80 ISIS fighters and drove the rest from the town that's situated just nine miles from the city of Mosul. Mosul, the second largest city in Iraq, has been occupied by the jihadi army since August 2014.

Bartella, once home to thousands of Assyrian Christians, has been nearly deserted since ISIS took control. The Islamic State gave Christians and other religious minorities an ultimatum: pay a tax, convert to Islam, or die.

Christian homes were looted and churches desecrated and even turned into training camps for ISIS.

One of those training centers was inside Saint Matthew's Church. Militants removed crosses from the steeple, defaced statues, and scrawled their black jihadist flag on a wall.

In one room a white board shows a regimen for ISIS fighters that includes physical training, Islamic teachings and military tactics. Another sign showed militants the physical weak points of the human body including the eyes and nose.

"This ancient church which was desecrated by the terrorists has today been liberated," Lt. Gen. Talib Shaghati, Iraqi Commander of Joint Operation Command, told news outlets on the scene.

Now he says anti-terrorism forces are cleaning Bartella of explosives, mines and other obstructions.

Iraqi and Kurdish forces backed by a U.S. led coalition will now work to retake the city of Mosul from ISIS. The operation is the largest undertaken by the Iraqi military since the 2003 U.S.-led invasion.

Christians celebrating in #Irbil #Iraq the news of Kurdish-ISF advancement in east #Mosul after a mass devoted to Baghdida & Qaraqoush. pic.twitter.com/5p0dp4Xcy1