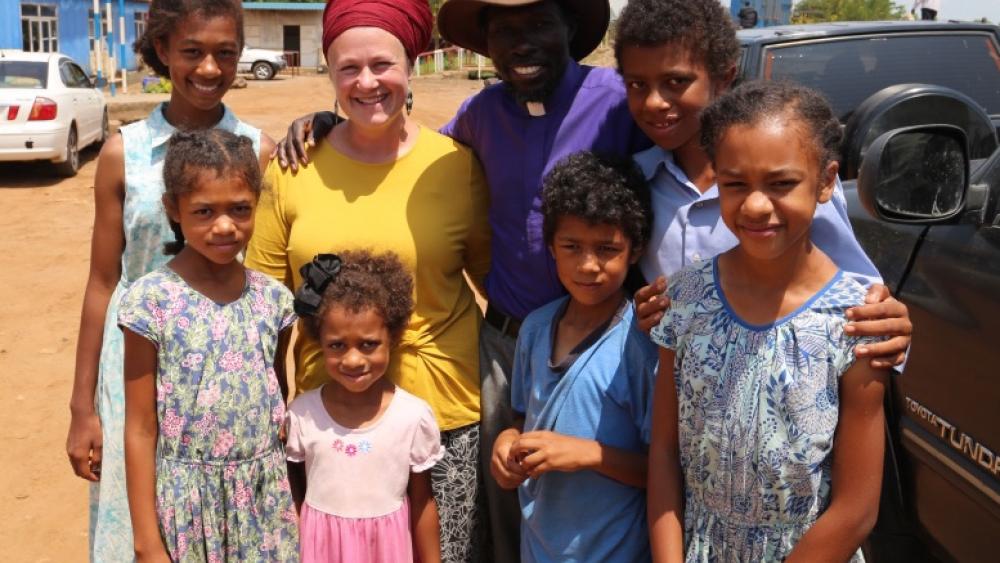 SOUTH SUDAN -- Five years ago, South Sudan became the world's newest country. Since then, 50,000 people have died and more than 2 million people have been displaced from ethnic violence gripping the fragile nation.

Now, William Levi is risking death to rebuild his war-torn country, one family, and one village at a time.

Levi knows all too well the dangers involved in such a mission. He was 18-years-old when radical Muslim soldiers confronted him about his faith.

"I was asked to relinquish my Christianity and become a Muslim, take up guns and fight and ravage villages like this one. I said, 'No way! Mohammed did not die for me, Jesus did!'"

Levi was thrown in prison and tortured. Yet, he says he never lost hope because "I knew God was with me."

Just as refugees flee the Middle East today, Levi too left his homeland in 1985, finding asylum and a new life in America.

He's written about his experience in the book, The Bible or the Axe: One Man's Dramatic Escape from Persecution in the Sudan.

Levi says he knew there was a reason God spared his life.

"He kept me alive for the purpose of returning to proclaim the gospel in my homeland," he said.

His homeland is in the grips of an ongoing ethnic conflict pitting the country's two largest tribes. Both sides have engaged in horrific acts of brutality.

But his escape from the clutches of jihad was only the beginning of an odyssey that eventually brought him, his American wife Hannah and children, back to his war-torn nation.

"On our wedding day she read a scripture. She said, 'Your people will be my people. Where you go, I will go, and where you die, I will die.'"

"We are very, very grateful to the Lord for enabling us to build a home here, to have a permanent presence here," Hannah Levi told CBN News.

And where the Levis live is nothing like their home back in Lanesborough, Massachusetts.

"It is definitely on the edge of the jungle," Hannah said while sitting in the bush. "We feel like we are always pushing back the jungle."

The Levis have six children: Abijah, Nechemyah, Hadassah, Jemimah, Yehudah and Yerushah. Their 13-year-old daughter Abijah Levi is the oldest.

"Even right now, we are in the middle of a war, but we feel safe," Abijah said.

Their 12-year-old son Nechemyah Levi misses his friends back home in America, but understands the mission they are on.

"This place is a fertile and developing nation that has only been around for five years, yet we have an incredible opportunity to make it into an even more beautiful land."

Even 5-year-old Yerushah Levi sees the importance of risking their lives to help South Sudanese people.

Asked why she loved coming to the African country, she remarked, "I come here to help my parents because they are helping people who are sick and need a better home."

And how does 9-year-old Jemimah Levi pray for South Sudan?

"I ask God that people would stay put and not be fearful and that this country will become stable," she said.

Building a Community in South Sudan

In between homeschooling and raising their children, the Levis run Operation Nehemiah Missions International, a Christian organization helping South Sudan rebuild from the ashes of war.

"We are here because we believe that Christ is worthy of the worship of South Sudan," Hannah said.

One of the first things they did when they moved to a remote village in Borongole, in Magwi County, in the Eastern Equatoria State of South Sudan, was to build a church.

There wasn't a soul living in a 10 mile radius of the church. In fact, the entire area was bush.

But all these years later, more than 10,000 people have moved in the vicinity of the church, many of them hearing the gospel for the very first time.

"Before the congregation was established there was a lot of hatred and fighting between ethnic tribes," Michael Levi, pastor of Nile Beth Israel Messianic Congregation, said. "People didn't know about God or the importance of forgiving one another but that all changed when the Word of God was preached."

Rebuilding, One Family and Village at a Time

In addition to church planting and family discipleship programs, Operation Nehemiah also runs a brick-making factory, agricultural development initiatives and other numerous projects--all in an effort to rebuild the local economy and empower war-weary residents.

"As the Bible says, 'If you don't work, you don't eat.' So people are beginning to create sustainable living for themselves," William said.

His goal: rebuild South Sudan one family and one village at a time.

"We want them to stay in the village so we create for them an environment where they can foster entrepreneurial ventures and be able to support their families."

But he needed fellow countrymen who escaped the war like he did many years ago to come back and help.

Timothy and his family were among the scores who responded.  After years of living in exile, he returned to serve as country director of Operation Nehemiah in South Sudan.

He leads a team of 20 men who build homes in the village. But more than work, he wants these men to have a personal encounter with Christ.

Trusting God for Safety in a Dangerous Land

Lueken is from Massachusetts. He met the Levi family in 2009 and decided to join them in rebuilding South Sudan.

"When I came here God confirmed to me that South Sudan was where I was supposed to be," Lueken told CBN News.

In 2013, Lueken moved to the war-torn nation permanently, and this summer married a girl from South Sudan.

He knows there are risks involved, but feels peace about the calling on his life.

"You are safer in a dangerous place with God than in a safe place without God," he said.

In 2003, Operation Nehemiah started the first-ever radio station in the area, reaching listeners with Christian music and messages of reconciliation.

In between school, chores, Bible studies and church activities, the Levis also cultivate 200 acres of land, growing all kinds of fruits and vegetables.

Levi insists that farming should be a family affair, in which "parents and children work together to create a thriving, Christ-centered community."

Operation Nehemiah views the Beth Israel Farm initiative as a prototype that will provide families a long-term solution to the country's food insecurities.

"For 30 years our people have stayed in refugee camps and they've depended on handouts from the U.N.," William said. "Now God has given us a land and a country and we want to see to it that we are able to produce food from here and be able to give back to those who have given us when we were in our our difficult time."

Hannah says their desire is "for the people to have their eyes opened to see the value of the land that God has given them and to take hold of it in a way that is lasting and productive."

Meanwhile, plans are underway to convert their existing home into their third church plant with the eventual goal of resettling hundreds of South Sudanese families around the property.

Levi admits the news coming out of South Sudan is bleak. Inflation is close to 600 percent. Parts of the country are facing famine conditions and ongoing violence is threatening to tear the fragile country apart.

Clooney, who co-founded a human rights group called The Sentry Group, found that South Sudan's warring parties had "manipulated and exploited ethnic divisions" in order to build up wealth for themselves.

"The simple fact is they are stealing money to fund their militias to attack and kill one another," Clooney said.

Not Giving Up on South Sudan

William Levi says he feels "ashamed" when he reads about what's happening to his country.

Still, he and his family are not giving up on South Sudan.

"South Sudan is not a lost cause," Hannah said. "There's great opportunity here for the gospel to go forward and influence culture."

William believes Christ is the answer for South Sudan.

"When we have a strong church, then the community around will be strong and that translates into a strong country," he said.